“Love in Contract” takes a step back during its penultimate week to focus more on ancillary relationships as we prepare to give our characters a sendoff. Revelations abound in this week’s duo of episodes as parentage is revealed, and everyone has a generally exciting time while our male and female lead get a bit of a break. Choi Sang Eun (Park Min Young) and Jung Ji Ho (Go Kyung Pyo) are finally in the clear and able to love freely. But just as some problems prepare to leave our couple’s life, others are ready to reenter.

Warning: spoilers for episodes 13-14 below. 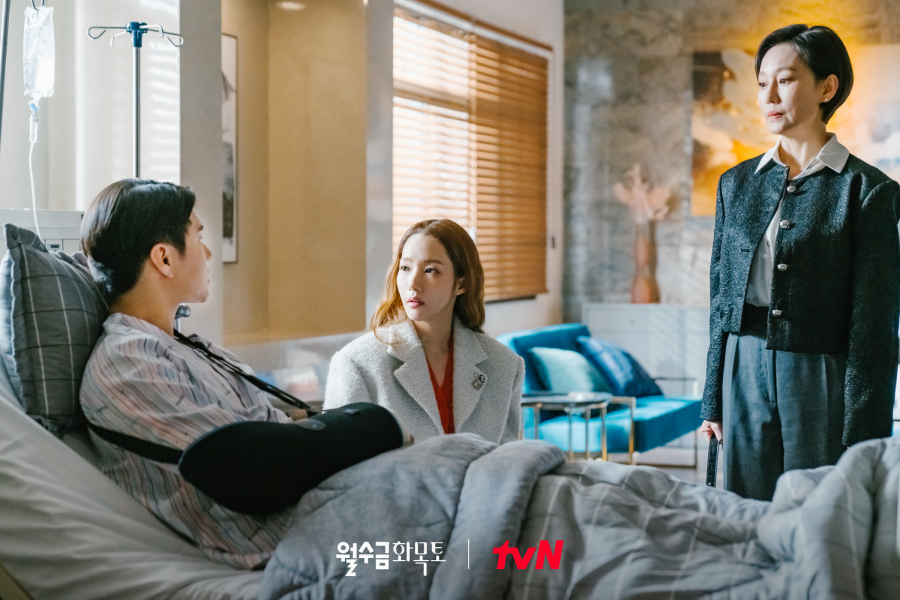 Last week, we left off on a cliffhanger with Ji Ho racing to save Yoo Mi Ho’s (Jin Kyung’s) life. He succeeds in getting to her before the truck of doom does, though it costs him a fractured arm. Mi Ho is shaken but alright, while Sang Eun frets over Ji Ho’s condition, and it isn’t long before she has him moved into her home. 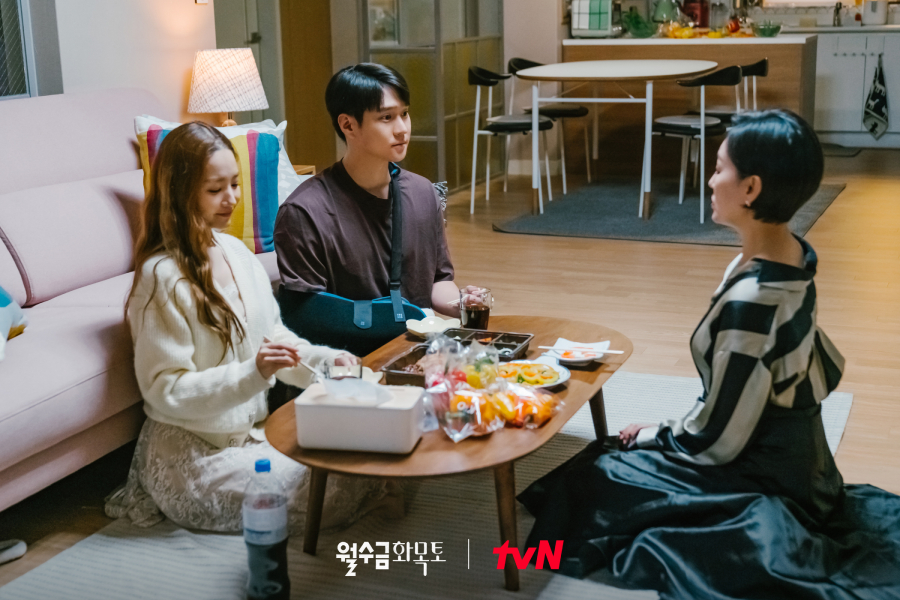 What ensues is some of the show’s best comedy as Mi Ho tries to ascertain Ji Ho’s profession and whether he is worthy of her Sang Eun, while Ji Ho tries to deflect on why he and Mi Ho were meeting, and Sang Eun is oblivious to everything but whether her Ji Ho is alright. Mi Ho even plants herself in the hallway between Sang Eun’s and Ji Ho’s rooms to ensure no funny business goes on at night between the two of them, haha. 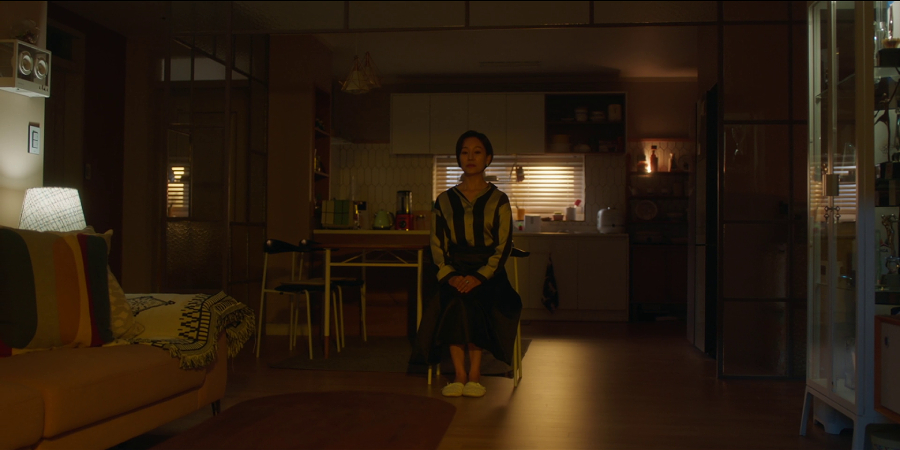 But Ji Ho has his reasons for wanting a private conversation with Mi Ho because he has stumbled onto a truth that Sang Eun isn’t aware of. Mi Ho is actually Sang Eun’s birth mother! (Oh yikes). Several decades back, Mi Ho was dating the now Chairman of Ina Group and fell pregnant, but he abandoned her to marry some rich heiress who would further his social climbing. It was then that Mi Ho learned that background didn’t matter as much as pedigree. If she had been wealthy and powerful, then she wouldn’t have been tossed by the wayside. She gave Sang Eun up for adoption after birth but came back and brought her after Ina Group sought an heir, determined that Sang Eun would have all the power that she didn’t. 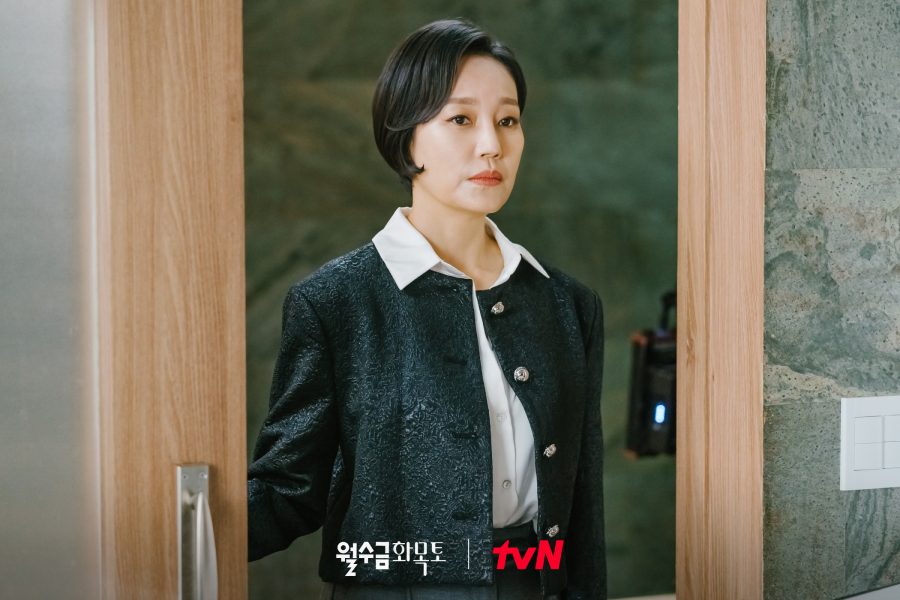 It’s actually a very sad, very human look at Mi Ho, who clearly grew more fixated on this idea of wealth and class as all that mattered as the years passed. Like Sang Eun, she took her pain and turned it into a weapon to get her where she needed to be in life. But where Sang Eun used her skills to help others, Mi Ho used them to force Sang Eun into an awful, tight mold. Ji Ho knows that this was abuse and wonders if he should have Mi Ho punished for it, but one of his colleagues wisely notes that it’s the victim who should get to decide what happens to Mi Ho. And when Ji Ho indirectly asks Sang Eun whether she’d ever want Mi Ho to go to jail, Sang Eun shakes her head. No matter how much she hates Mi Ho, she doesn’t wish her harm. And Ji Ho respects that. 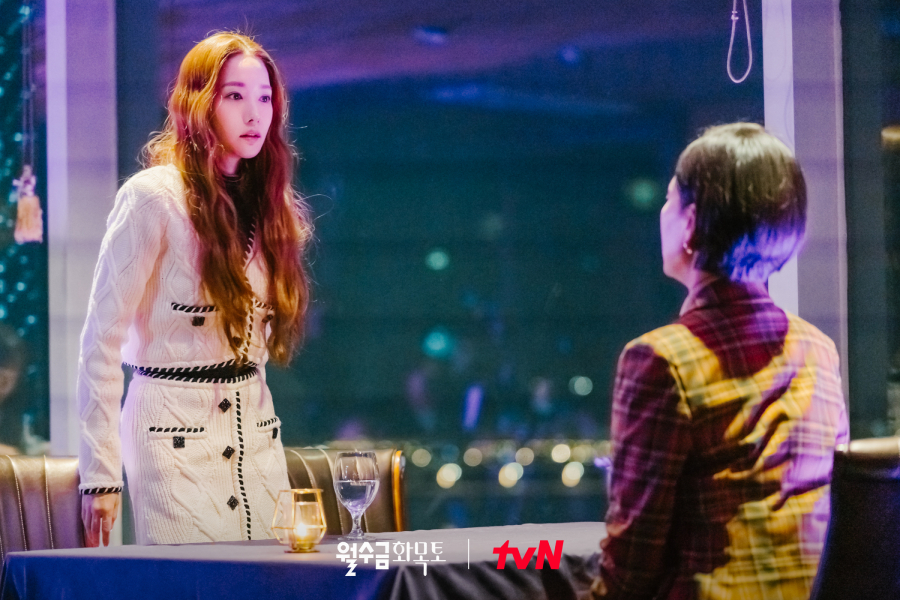 Ji Ho confronts Mi Ho with the truth of Sang Eun’s parentage. She tearfully says that she has no right to call herself Sang Eun’s mother, not when she has caused her so much harm. Ji Ho sees that the two women actually care for each other in their own strange ways and sets out to engineer a way where they both acknowledge it. Which is why both women find themselves seated across each other at a restaurant with Sang Eun thinking that she was meeting Ji Ho. 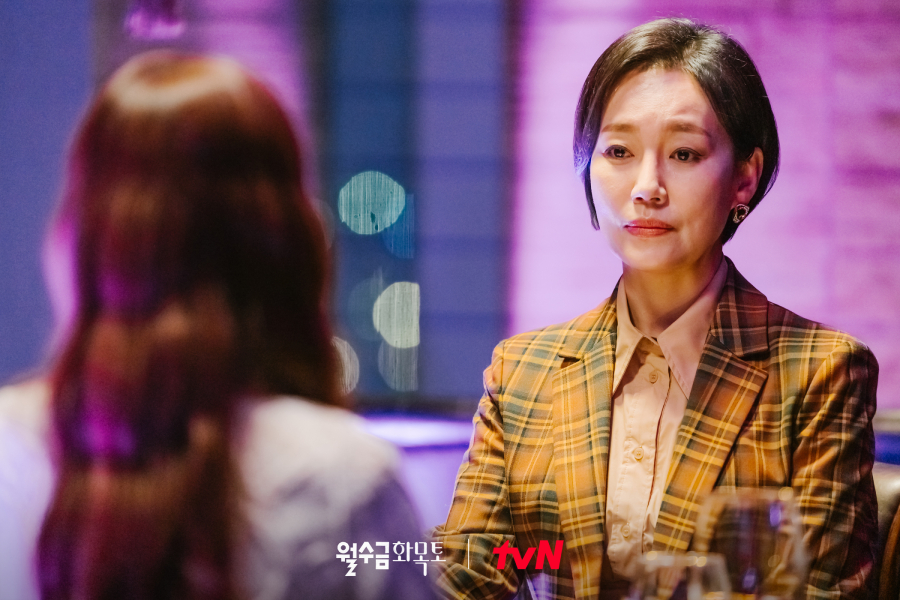 They’re forced to finally have an honest conversation where Sang Eun admits that she sent Mi Ho money for 13 years because she was worried about her and how she was doing. For her part, Mi Ho apologizes for all she did over the past many, many years. She doesn’t try to justify herself or explain her reasoning but just accepts that she did wrong, which is the best type of apology there is. 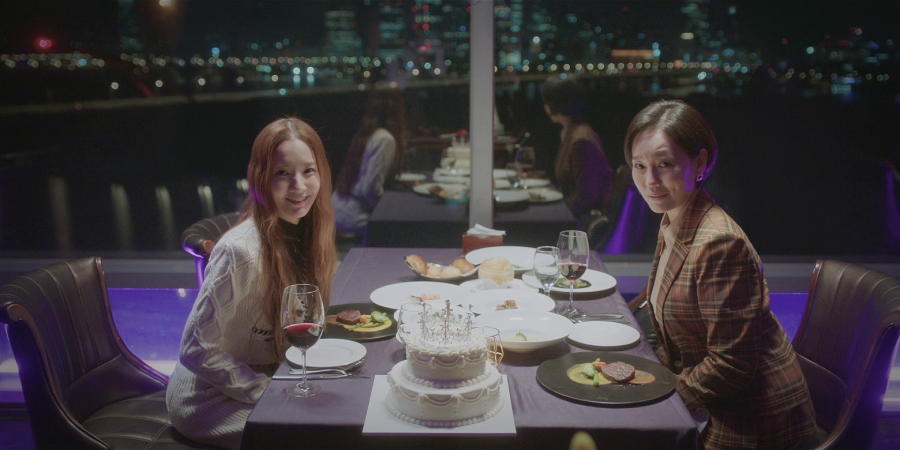 Ji Ho pulled out all stops and even ordered a cake to celebrate their reconciliation, and the two women pose for a picture for the first time in years, perhaps the first time at all. And speaking of first times, there’s someone about to take a step in an entirely new direction. And it just might break him. 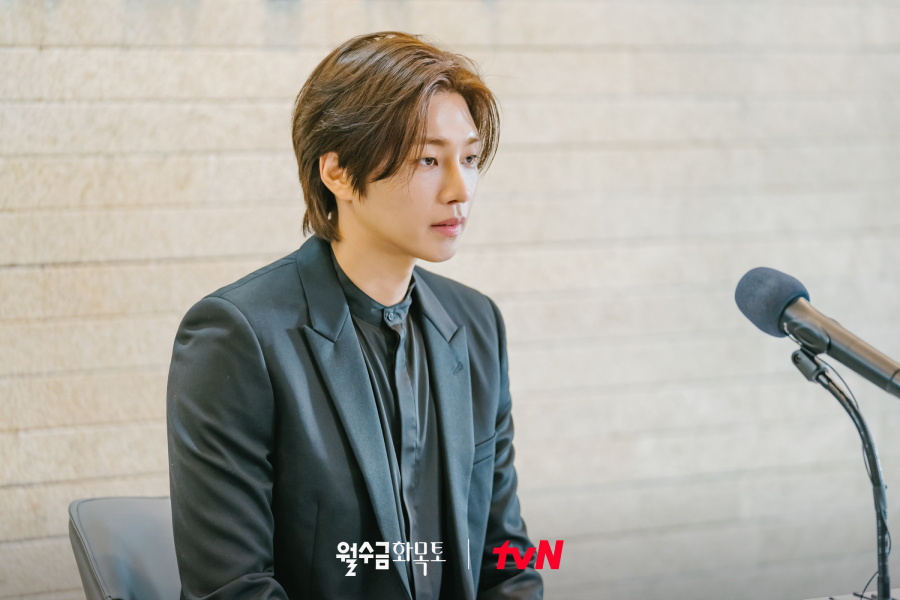 Kang Hae Jin (Kim Jae Young) finally sees reason and cancels his contract with Sang Eun, announcing their breakup. Realizing just how hard Sang Eun worked to preserve her freedom and how much he took from her with his ill-advised plans, he goes full-on self-sacrificial to give her her freedom back. Despite the end of his relationship, his mother won’t stop pressuring him to join the company, his father won’t stop trying to force the same, and his brother won’t stop scheming to get rid of him. Hae Jin has never wanted any of this, but when he gets wind that his brother plans on solidifying his position in the company by forcing Sang Eun to marry him and joining with Ina Group, Hae Jin goes all out to protect her by resigning from the entertainment industry.

This is a huge move that shakes Hae Jin to the core. This was a job he truly loved, and he’s giving up for the sort of soul-sucking corporate life he never wanted. But it gives him power and places him in direct opposition with his brother such that he can protect Sang Eun if need be. It’s a difficult move, but it shows that Hae Jin really is growing up with all the emotional torment that comes with it. But we can only hope that he doesn’t break under the weight of this familial pressure. 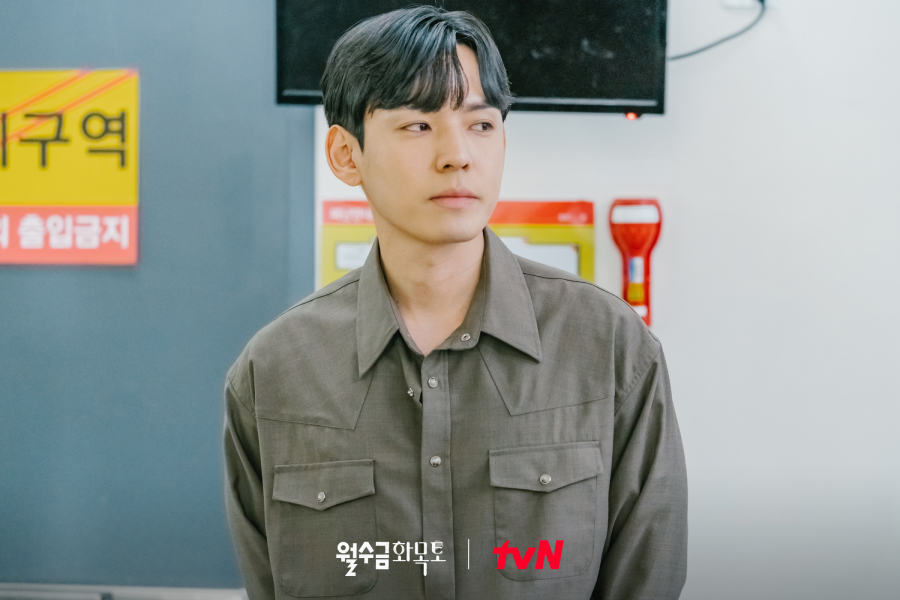 Woo Gwang Nam (Kang Hyung Suk) has always been the bright spot in this show. When Hae Jin leaves the entertainment industry, his agency scrambles to replace him and suggests that Gwang Nam takes his place. Gwang Nam says he’ll consider it but privately searches for flights to Vancouver. But why? 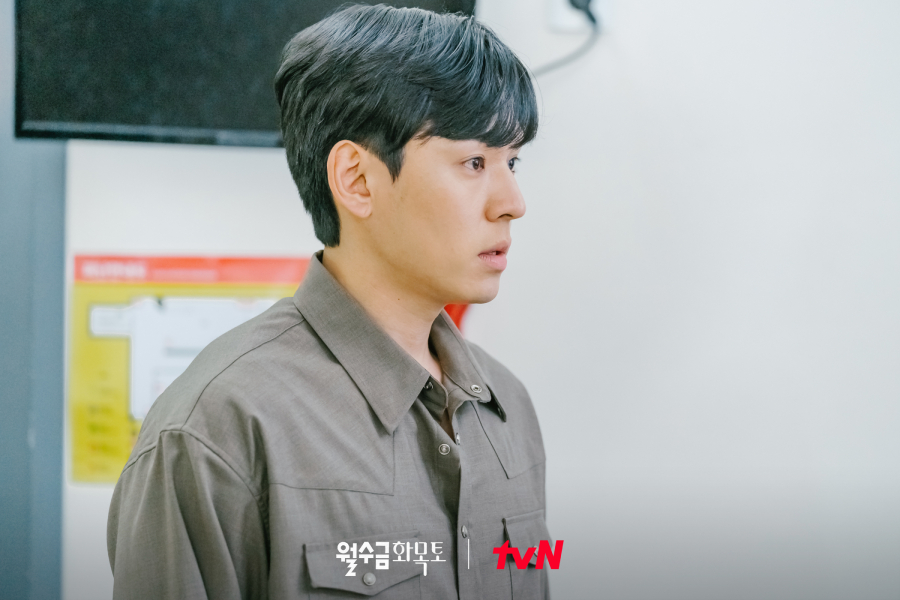 Sang Eun is too preoccupied and in love with Ji Ho to notice that Gwang Nam is withdrawing, but something is up with our man. He seems to have genuinely enjoyed working for Hae Jin and even showed up at Hae Jin’s office with Hae Jin’s ex-manager in tow, both of them hoping to continue in newer roles, bless their hearts. Hae Jin ruefully turns them away as his father has already hired people for him. Gwang Nam confesses to Hae Jin that he’s planning on leaving and hopes for his happiness but doesn’t tell Sang Eun. It seems likely that Gwang Nam might be doing this because a few people in his life already know that he’s gay and fears that he could achieve his dream to become a singer under a reputed talent agency, only to have it fall apart because of who he loves. I hope this is further explored because Gwang Nam remains one of the show’s best characters and deserves his happy ending!

5. Bonus: Why Ji Ho kept his contract with Sang Eun for five years 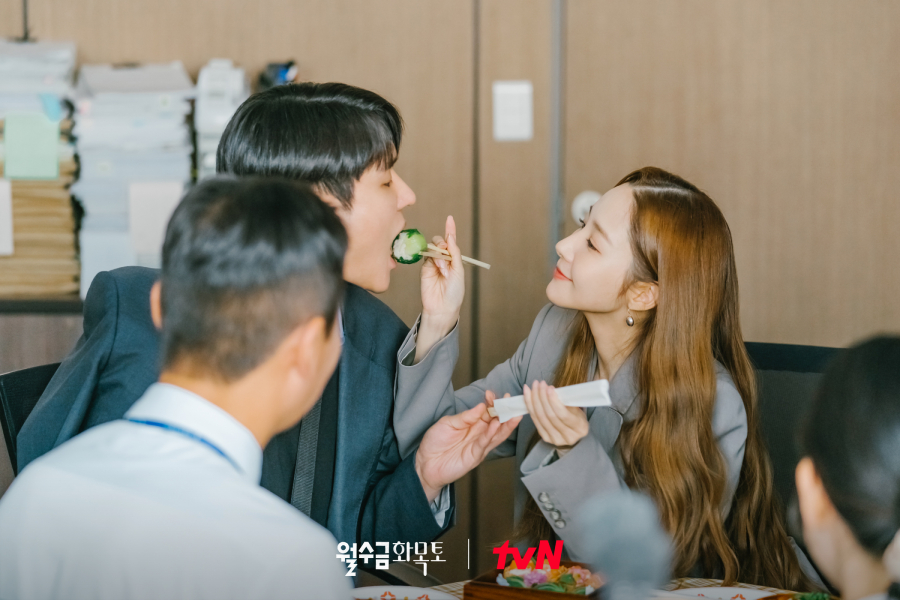 After a misunderstanding where Sang Eun is put out that Ji Ho met with his ex-wife to return her alimony (which he never used), Ji Ho finally opens up to her on why he kept his contract with her for five years. He says that he was about to cancel it when she arrived for dinner that night and asked him what they were eating with such a bright smile that he couldn’t bring himself to do it. One more day, he told himself, and that became five years worth of dinners. Aww, that’s just adorable!

Currently Watching:  “Love in Contract,” “Blind,” “Gaus Electronics,” “Love is for Suckers.”
Looking Forward to: “Island,” “Queen of the Scene,” “Black Knight,” and, of course, Ji Sung’s next drama.

5 K-Dramas That Primarily Focus On The Importance Of Family

5 K-Dramas That Primarily Focus On The Importance Of Family