Feelings spiral out of control this week as Choi Sang Eun’s (Park Min Young’s) two contractees completely lose their hearts and minds. Jung Ji Ho (Go Kyung Pyo) steps up to the batting plate, ready to give love his best shot after the trauma of his failed relationship, while Kang Hae Jin (Kim Jae Young) walks a much more dangerous road, prepared to do anything to win over the girl he loves even if it means force.

This week was chockfull of aggravating moments as everything and everyone scheme to keep our leads apart. Read on to hear the worst offenders as well as the two rays of sunshine we got amidst the storm.

Warning: spoilers for episodes 9-10 below. 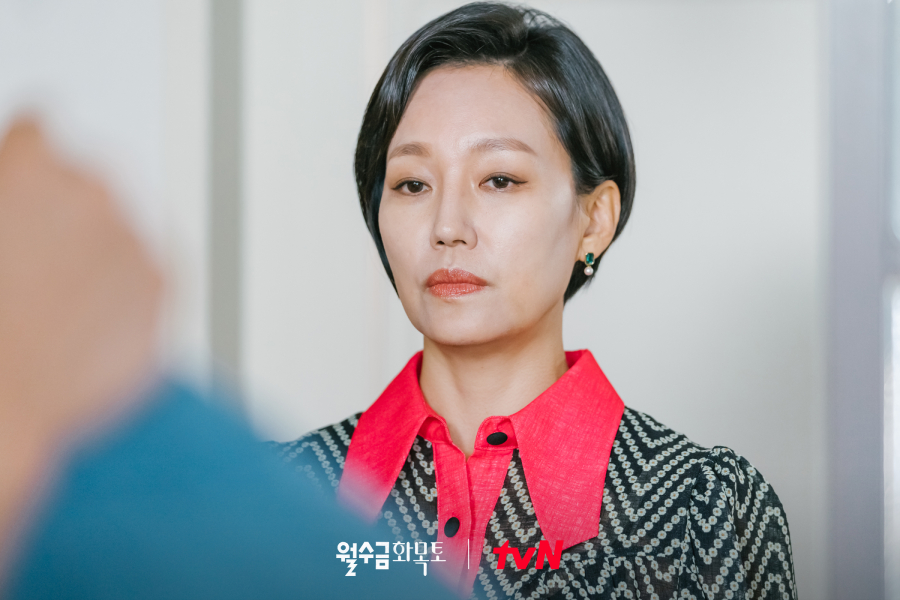 With Yoo Mi Ho’s (Jin Kyung’s) attempt to ingratiate Sang Eun into Ina Group failing so spectacularly that Sang Eun could even be forced to leave the country, the schemer vows to secure Sang Eun a marriage into another conglomerate. Mi Ho is clearly doing this out of some form of affection for Sang Eun. But what’s frightening is how she fails to realize that she’s doing the same thing she did all those years ago: turning Sang Eun into a doll to use for everyone’s pleasure but Sang Eun’s. 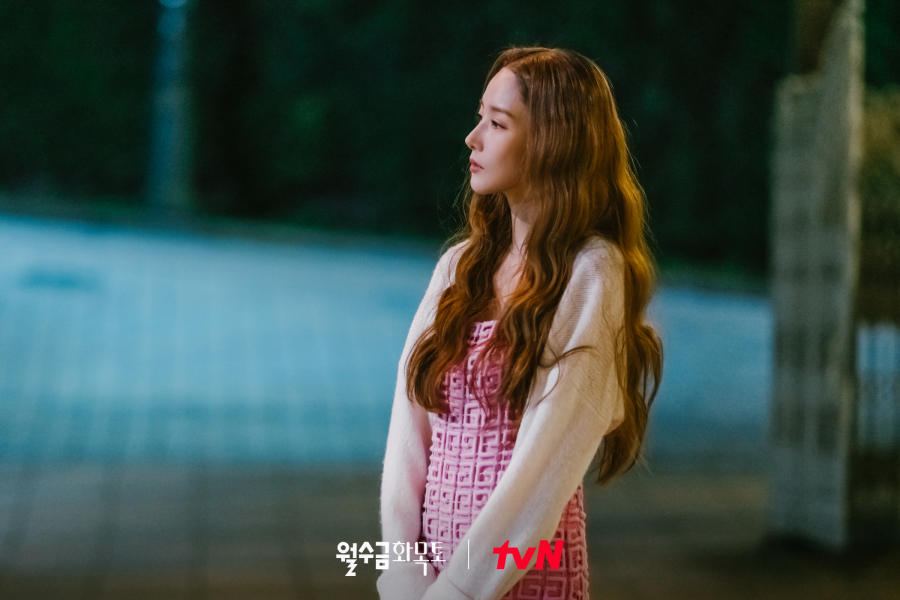 Mi Ho still sees Sang Eun as a failed project and truly believes that both her and Sang Eun’s redemption can only be by recovering the position in society they should have had from the start. It’s such a warped form of affection that it’s no wonder that Sang Eun is just a tad narcissistic herself and sought out a profession where she allowed herself to be used in order to experience both happiness and monetary gain. But what’s frightening is when Mi Ho puts together that Sang Eun is Hae Jin’s mystery girlfriend and tells his parents as much. Suddenly, everyone is making long-lasting decisions that will alter the course of Sang Eun’s life. And, of course, no one has bothered to tell Sang Eun.

2. Aggravating: Jung Ji Eun inserting herself into the triangle 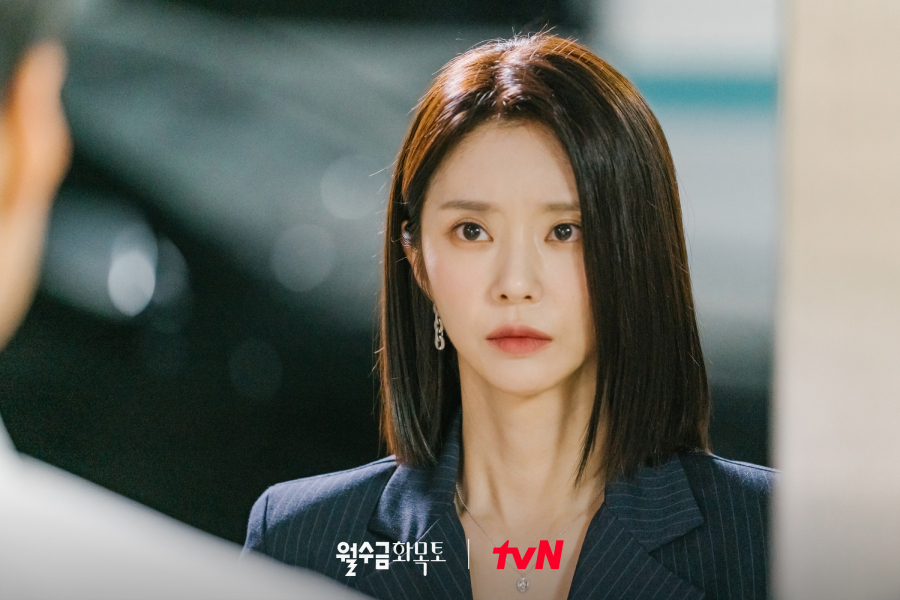 I was hoping we wouldn’t go this route with the ex-wife, but here we are. Jung Ji Eun (Lee Joo Bin) was the first woman Ji Ho loved and the first to break his heart when her ambitions pushed her to new heights of cruelty toward him. But seven years later, she seems to have undergone a radical mental transformation and seems to believe, or wants to believe, that Ji Ho is still nursing affection for her. 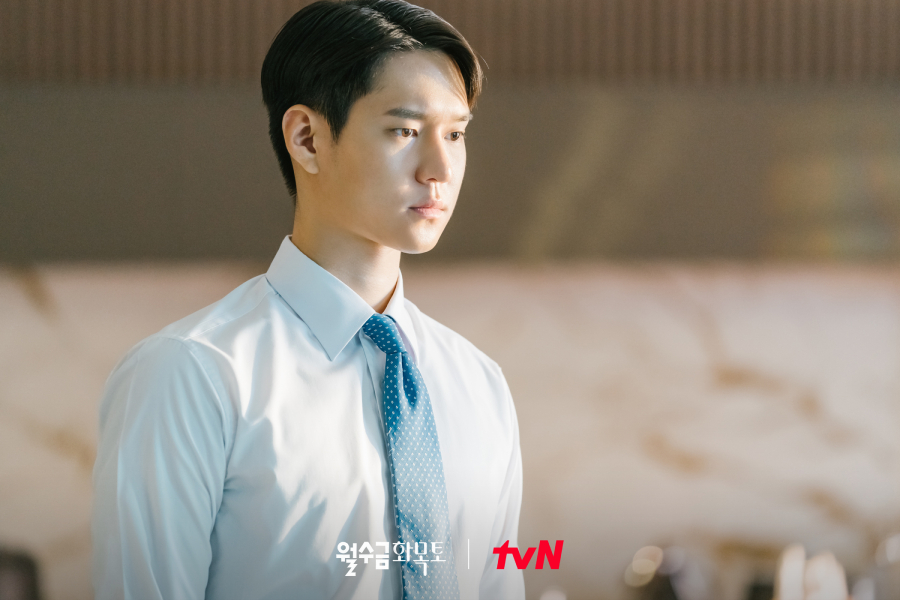 So when she unwittingly discovers that Sang Eun has a contract marriage with both Ji Ho and Hae Jin, she goes ballistic. In classic selfishness, she tries to twist that Ji Ho must be pining over her for him to have resorted to this while she was gone. The great thing about Ji Ho is that he shuts this down immediately and tells her pointblank that he doesn’t feel the need to explain his wife’s profession and doesn’t mind it. What a guy! Now, if only Sang Eun could do the same.

3. Aggravating: Sang Eun having to apologize to Hae Jin for the kiss he forced on her 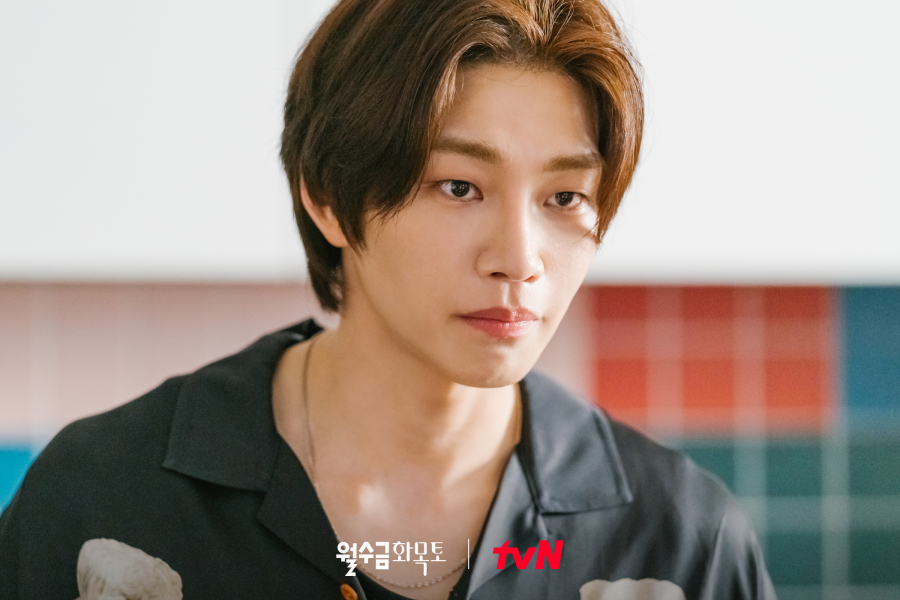 The kiss with Hae Jin takes the cake for one of the weirdest in drama history. We barely see it for one. Ji Ho is right there, number two. Plus the consent here is incredibly dubious because he just swoops in and attacks her face. And then he tells Ji Ho that they’ve confirmed their feelings for each other? Red flags everywhere with this guy. But what makes this even more aggravating is the way Sang Eun handles it. She’s a people-pleaser at heart and apologizes to Hae Jin for it, not only once but twice! But it’s him who forced it on her and built expectations around her. 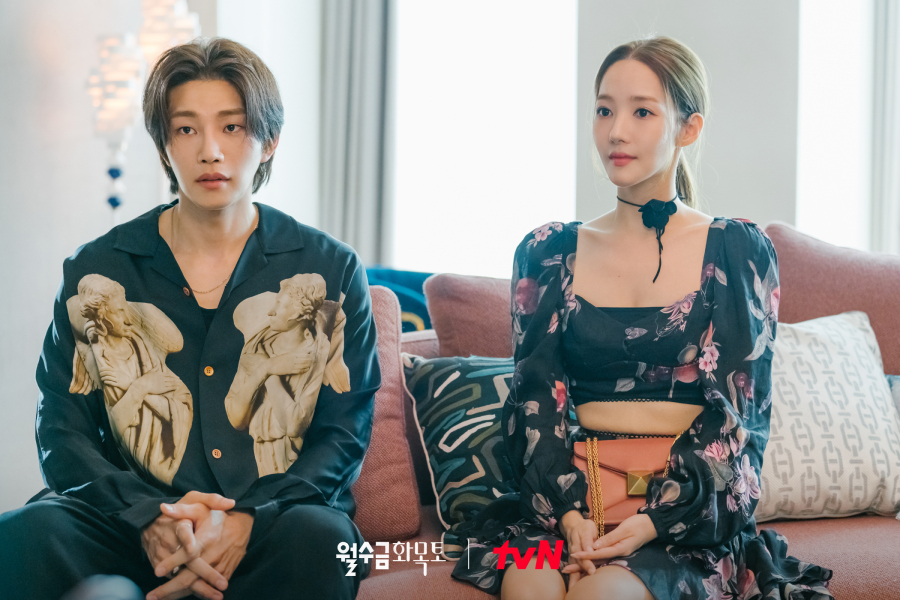 Luckily, Ji Ho is easily distracted and doesn’t take it to heart. He straight up confesses that he was heading over to Sang Eun’s to confess anyway before he ended up having to see her making out with Hae Jin. That puts Sang Eun on pause as she finally realizes that her feelings are requited. And we finally get to the good part.

After almost nine episodes of waffling, this kiss feels well earned, especially for Ji Ho. It’s a sign of his growth that he finally stops overthinking everything and just goes for it, to amazing results!

Sang Eun is over the moon afterwards, and they both cling to their phones upon getting home, trying to navigate this new air between them. Ji Ho, once again, takes the lead by suggesting that they meet after she’s finished up with Hae Jin. It’s a great move that not only demonstrates great willingness to understand her job and work around it but also definitive proof that he wants to go beyond their contract-mandated dates.

They’re so so cute afterwards, attempting to go on a date while his (frankly pushy) colleagues try to force him into joining their drinking games without respecting their wishes. Ji Ho sneakily attempts to hold her hand, the closet romantic.

And it’s amazing to see how Sang Eun bolsters him at his job and ensures that he is able to maintain a collegial relationship. It’s equally heartwarming to see that he would never put his job before her. But why does this week suffer from such an absence of heartwarming moments? Alas, it’s because Hae Jin has other plans. 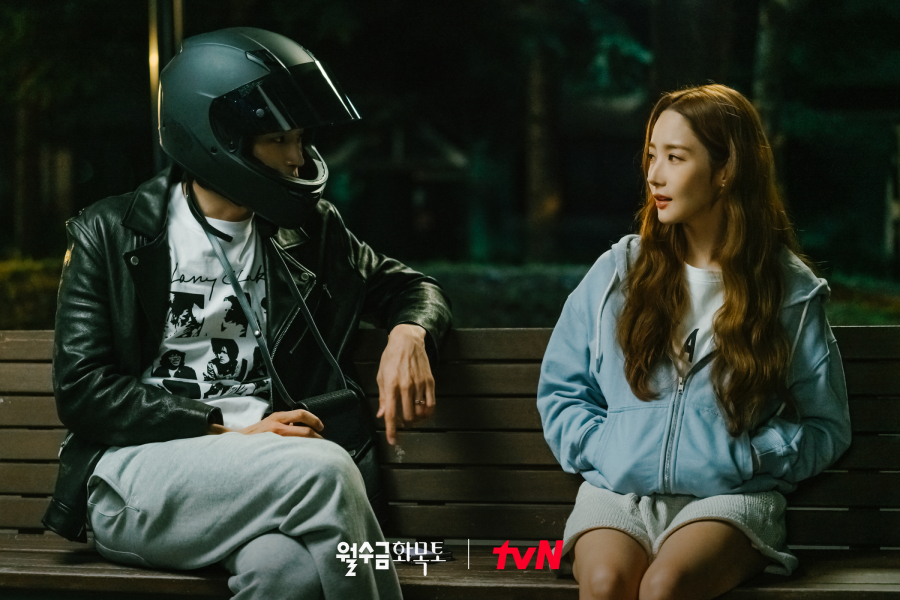 Hae Jin was doing so well, and he had managed to morph into a rather sympathetic character last week only to dash it all to the ground. Where to even start? To sneak up on Sang Eun wearing a motorcycle helmet after everything she went through? Really? Next, despite her clearly rejecting him and making it clear that she has no intention of returning to her old life, he keeps the truth from her: that everyone is planning their marriage. It’s red flags all the way to infinity. 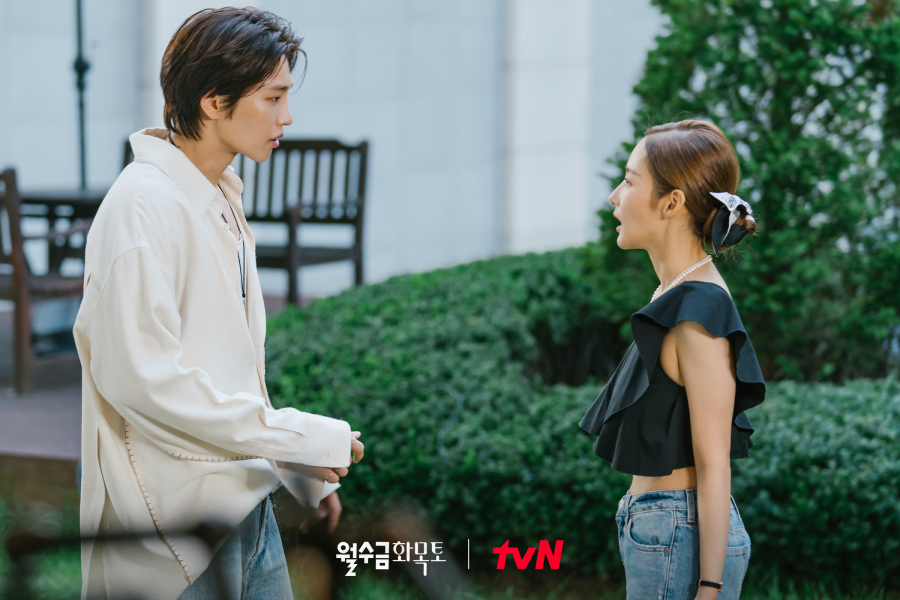 He’s too cowardly to tell her that his scheme has put her in jeopardy. So despite knowing that the paparazzi are stationed around his apartment, he brings her to a location where they can all see her for a conversation. It isn’t clear whether Hae Jin does this on purpose or not, but it’s just plain ridiculous for him to believe that the paparazzi aren’t present. And why lift and carry her off when she’s perfectly capable of walking? It’s just low after low with this guy. And Sang Eun has been cutting him far too much slack. She sees herself in him, but he’s not taking the hint.

Thankfully, we have another potential couple in the horizon to calm all this frustration. Woo Gwang Nam (Kang Hyung Suk) has been a delight from the start, and it’s wonderful to see that he might be getting his own love line! Yoo Jung Hwan (Kim Hyun Mok) is astonished by Gwang Nam’s talent and visuals after seeing him at a friend’s wedding. He’s significantly less pleased upon finding that Gwang Nam is now Hae Jin’s bodyguard. 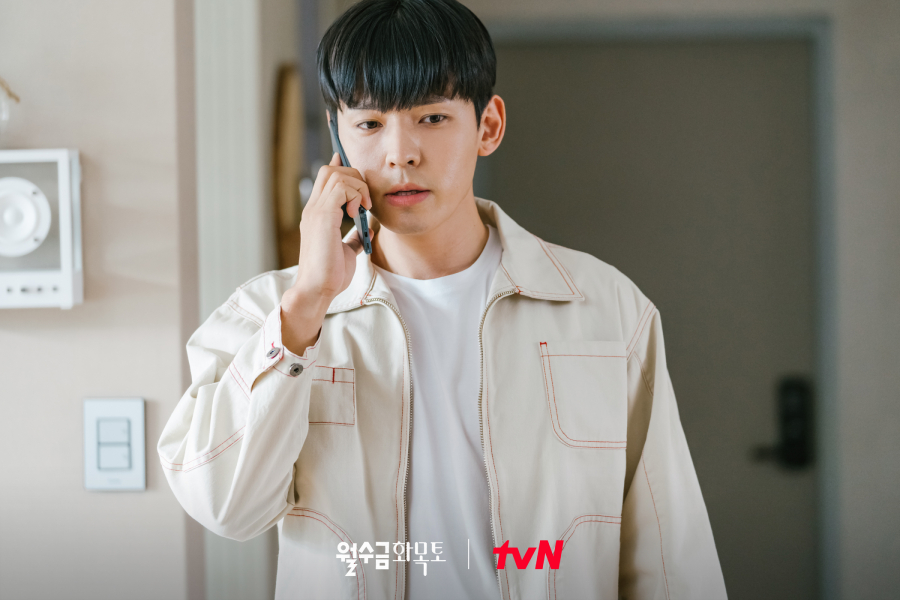 With Gwang Nam’s permission, Hae Jin tells Jung Hwan that Gwang Nam is gay (why can’t Hae Jin be this respectful of Sang Eun as well?), and while Jung Hwan doesn’t care, it’s clear that he might start to care in a very different way. Gwang Nam is every inch the dependable protector from kicking water bottles thrown by irate fangirls to charming everyone in sight. Jung Hwan grows more and more irritable as everyone falls under Gwang Nam’s spell, and that’s how all good romances get started! Seeing more of these two should be fun! 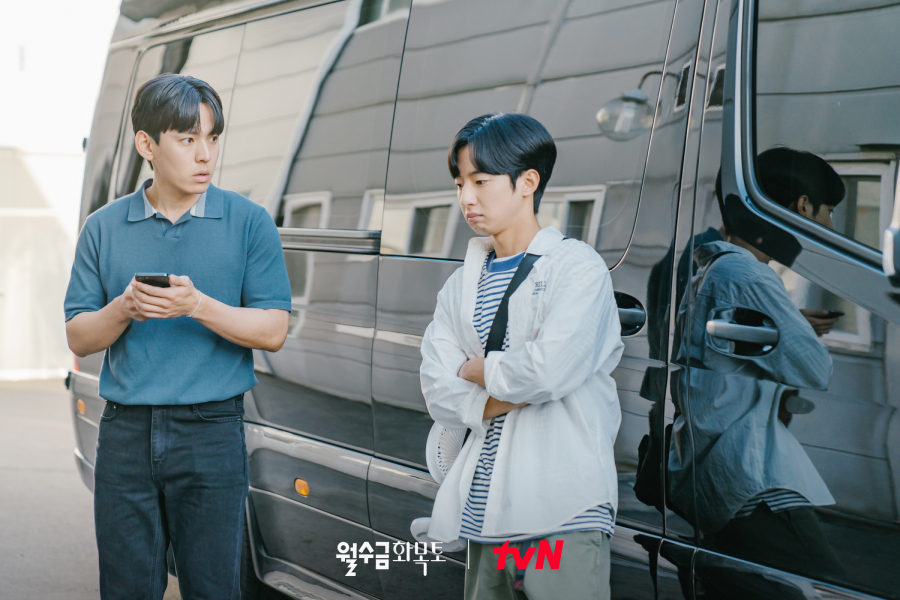 Now that Sang Eun’s face has been revealed to the world, including to Ji Ho’s colleagues, it’s unclear how she can proceed from here. Either she throws Hae Jin to the wolves (which she should), or she plays the martyr and returns to her old life (please don’t!). Regardless of which one she chooses, we can only hope that both her and Ji Ho’s hearts and lives stay intact in the process!

Kim Sung Mi (Bae Hae Sun) remains lovely as Ji Ho’s only confidante and coach who has genuinely helped him understand his own feelings. She’s evidently so proud of him when he admits that life without Sang Eun would be too horrible to imagine. Plus she doesn’t seem to mind Ji Ho seeking counseling at odd hours of the night, aka when his mind is at its most discombobulated!

Aww, if only Sang Eun heard that!

Currently Watching:  “Love in Contract,” “Blind,” “Gaus Electronics,” and “Love is for Suckers.”
Looking Forward to: “Island,” “Queen of the Scene,” “Black Knight,” and, of course, Ji Sung’s next drama.