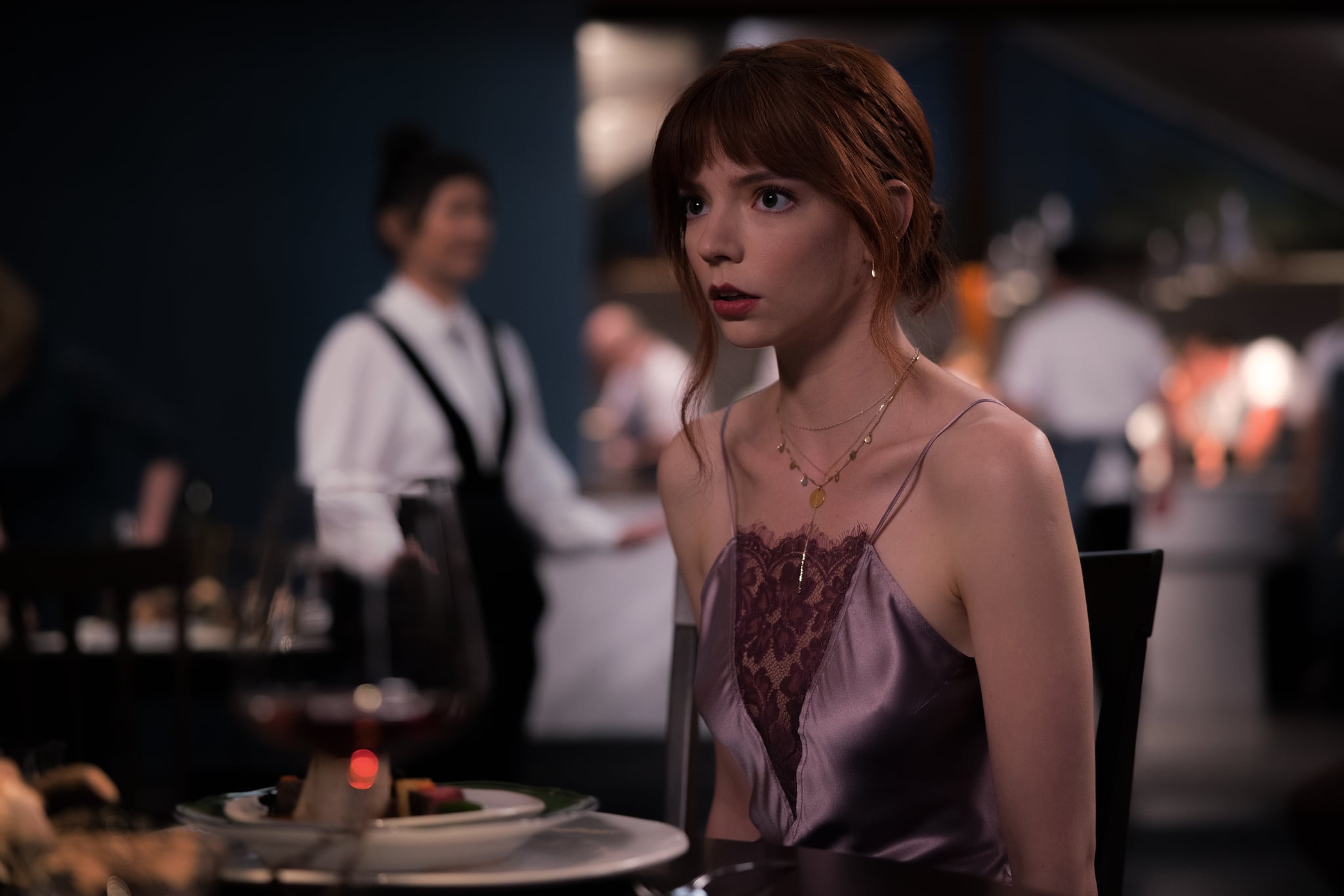 Anya Taylor-Joy is just 26, but she’s already an icon in the horror movie genre. She first broke out in 2015’s “The Witch,” which she followed up with films like “Split” and “Glass.” Her new movie “The Menu” is the latest in a long line horror movies for the actor, who admits to POPSUGAR that she’s not exactly a fan of watching them.

“I’m terrible at watching scary movies. My imagination is too big. And I’m a deep believer,” she explains. “I have never been to a movie and left that behind. I live in that world for at least three days after I’ve seen something.” She has to be careful about her film choices, lest she watch something absolutely terrifying that ruins her sleep for days.

But it’s a totally different story when it comes to acting in them. “I love it. I absolutely love it,” she admits. “They end up being really fun sets to be a part of because, if the material is so dark that you’re constantly going there, you need the gaffer to make you laugh after a take or you need a water balloon fight.” She adds of her horror characters, “I love going to those [dark] places in my mind because it’s free therapy, really.”

And even though she’s a horror expert, “The Menu”‘s script kept her guessing the first time she read it. “I’m terrible to watch films or television with because I can always guess the line, I can always guess the ending, I can guess the overarching theme. It’s infuriating for other people,” she says. “And with ‘The Menu,’ I did not see it coming.”

Taylor-Joy filmed “The Menu” at the tail end of 2021, and she says the movie’s unique structure made the cast feel more like a “theater troupe” than a traditional movie cast. Most of the movie takes place in a one-room restaurant, where the chefs and diners are visible to each other most of the time. Director Mark Mylod wanted the camera to be able to rove around, so everyone was sitting at their tables, improvising. “You never knew whether you were on-screen or not,” she says. And when there were closeups, everyone would hang around to watch. “You had a front row seat to a brilliant performance. . . . Every table was its own world and filled with delicious characters,” she says. “There was a lot of clapping after takes, which I love.”

Taylor-Joy spent a lot of time at her table with Nicholas Hoult, who plays her character Margot’s date for the evening. The two became very close. “I cannot imagine being on a dinner date with somebody for two and a half months that you do not like,” Taylor-Joy says. “We just had a blast. He’s the best big brother I could ever ask for.”

And the two would improvise freely with each other, and some of their choices made it into the film, like when Margot, in Taylor-Joy’s words, leaps over the table “like a feral cat.” She had a hard time keeping a straight face during some of Hoult’s antics. “He’s so funny in this film. He’s deplorable. But so often, I just had to bite my cheek,” she says. “The Menu”‘s combination of horror and humor makes it one of the most fun watches of the year.

The character of Margot also appealed to Taylor-Joy deeply. “I loved that Margot was an enigma not only to the people in the restaurant, but to the audience as well, and the idea of a performance within a performance,” she says. Margot, she explains, is wearing a “mask,” so it was like playing two different characters at the same time. “I love that she’s unapologetic about who she is,” she says, adding that Margot “adores her profession.”

“And in an environment that should technically make her feel less than, she is the one that calls BS on all of it and refuses to be told that she is not worthy.” In contrast to other characters she’s played, Margot is the one who’s “the most comfortable in her own skin.”

And because Margot is the outsider amongst the characters, she’s the only one who can connect even a little with the movie’s villain, Chef Julian Slowik, and her actions help bring the film to its riveting ending. “I’m fully aware that what he’s doing is twisted and absolutely bananas. But I think she understands where he’s coming from,” Taylor-Joy says. “She’s obviously frightened of the situation that she’s in, but I think she also just sees a deeply wounded artist, someone who is genuinely hurt, and it connects to that.”

“The Menu” is in theaters now.

Is Chadwick Boseman in Black Panther 2?

Is Chadwick Boseman in Black Panther 2?