Archive 81 was one of the first big new shows on Netflix of 2022 and seemingly performed well on Netflix around the world but will it get a second season and what could we expect from a season 2? Here’s what we know so far.

The horror series is one of the first major Netflix Original series releases of 2022 with it having premiered globally on January 14th, 2022.

The show is a critical success for Netflix (more on the viewership success in a bit) with it carrying broadly positive reviews from both critics and audiences. As of the time of publishing the show has an 87% approval rating on RottenTomatoes and a 7.4 from audiences on IMDb (that’s increased over time).

Official Renewal Status: Not Yet Renewed
Our Renewal Prediction: 50/50

A brand new show like Archive 81 is highly unlikely to get a multi-season order upfront and indeed that isn’t the case. Instead, the show will only get renewed if it hits certain requirements. That includes viewership, stickiness (how many people start and then go on to finish the show), and other factors.

As of February 2022, the show has still yet to get a thumbs up or thumbs down on Netflix. Based on viewership (more on this in a second) we’re currently not swayed towards renewal or cancelation. The show did seem to find its stride in week 2 but almost 50% drop off from week 2-3 could spell bad news for the show. Cowboy Bebop had a similar drop-off.

The creators of the show have definitely set things up for a second season. We’ll come onto the story side below but in an interview with Variety, they outlined that they’ve planned for more.

“I think there’s a lot of story that we didn’t get a chance to tell in that eight-episode first season,” said creator Rebecca Sonnenshine adding “But we do know what Davenport is up to and so that is very much a part of Season 2. That’s great that, hopefully, we leave people with questions. I definitely try not to answer questions before people ask them as an audience. You don’t want to frontload information. We have a lot of cool stuff planned for Davenport.”

How well has Archive 81 performed on Netflix?

One of the best ways for a Netflix show to get renewed is by pulling in big numbers for Netflix. For a freshman show that’s always a difficult cast so let’s see how well Archive 81 performed on Netflix.

Thanks to data from numerous sources, we can look at exactly how well Archive 81 did on Netflix.

Thanks to the newly released Netflix Top 10 site, we can tell that in its first three weeks on the platform, the show was watched for 129.47 million hours.

The show dropped out between January 31st to February 6th likely dropping up to 50% from week 3 as the lowest hours viewed that week was 16.69 million hours watched.

Nielsen can provide us with an outlook as to how well the show specifically performed in the United States. Nielsen’s top 10s also backs up the above in that the show had a big jump in viewing from week 1 to week 2 likely because of the numerous articles and social media that were produced on the series.

IMDb MovieMeter data shows that the show managed to become the third most popular on its platform between January 16th and January 23rd. The week it was released it was at 69 which demonstrates, just like above, that the series was able to grow in momentum after the second week. Between January 30th and February 6th, Archive 81 was sitting at #21. It dropped to #56 for the week ending February 13th. 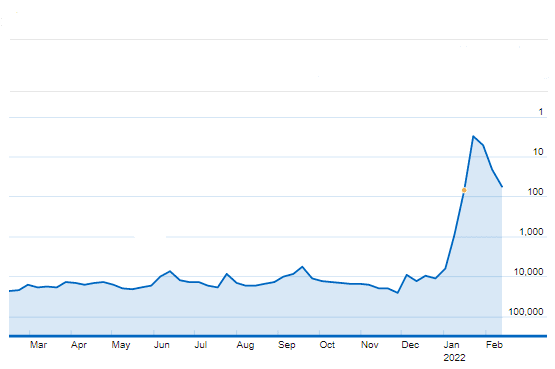 Netflix trailers are often indicative of how well a show goes onto perform on Netflix. In that case, the trailer has topped out at just over 2 million views comparable to Raising Dion S2 and Vikings: Valhalla but short of titles like Stranger Things and The Cuphead Show!.

What to Expect from Season 2 of Archive 81

Melody meets with Steve in the psychiatric facility but Melody has a hard time coming to terms with not being able to leave but eventually goes on to escape and end up saving Jess. Dan ends up saving Melody but has become trapped himself in the 1990s (specifically 1994 – a great year by the way).

That’s where the story concludes so naturally, there are a lot of questions that need to be answered and we need to know what happens. Our best guess story-wise is that the roles are now reversed with Melody doing whatever she can to save Dan.

In terms of cast members, beyond a few teases, it’s likely much of the main cast will return in some form or another.

Sonnenshine said that Samuel (played by Evan Jonigkeit) would likely return teasing that it’s a “very exciting branch of our story”.

Would you like to see Archive 81 return for a second season at Netflix? Let us know in the comments down below.

‘The Vampire Diaries’ Is Not Leaving Netflix in March 2022

Eddie Redmayne Netflix Movie ‘The Good Nurse’: What We Know So Far

Netflix’s ‘Vikings: Valhalla’: Everything You Need To Know About The Spin-off

‘Vikings: Valhalla’ Season 2: Everything We Know So Far

‘The Vampire Diaries’ Is Not Leaving Netflix in March 2022

Eddie Redmayne Netflix Movie ‘The Good Nurse’: What We Know So Far

Netflix’s ‘Vikings: Valhalla’: Everything You Need To Know About The Spin-off

‘Vikings: Valhalla’ Season 2: Everything We Know So Far