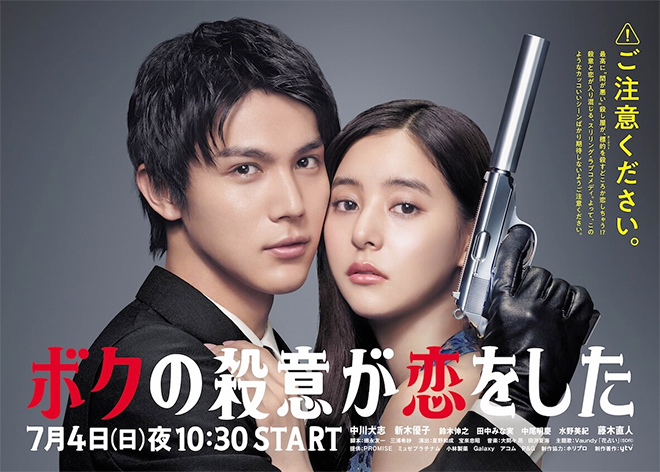 Story
Onotora Shu’s parents passed away when he was five years old and he was raised by their friend Onotora Joichiro. He currently works at the cleaning company that his foster father runs. Joichiro and a detective acquaintance, Wataya Shiori, watch over Shu. One day, Joichiro tells Shu that he is retiring and intends to hand over the company to him despite privately worrying about Shu who keeps failing at critical moments. Shu is surprised by his sudden decision. That night, Shu receives a call from Shiori who informs him that Joichiro was shot dead by someone at a wharf. However, Joichiro’s death is reported in the news as an accident from falling into the sea. This enrages an increasingly confused Shu. Shiori tells him that she was instructed to treat it as an accidental death. He finally learns about the Secret Operation Service, known as SOS, a top-secret organisation in the police that kills terrorists and bad guys who cannot be tried by the law. Shiori is in charge of SOS and his foster father was a legendary professional killer who had been sent on countless difficult missions without anyone knowing. Shu decides to become a hitman in order to avenge his foster father. He is well prepared when he approaches the mysterious and immensely popular manga writer Narumiya Mitsuki who is his assassination target. Mitsuki was caught on security cameras near the scene shooting Joichiro. Despite his physical abilities as a hitman, Shu is unable to kill Mitsuki because of his terrible timing, no matter how he tries. On the contrary, he ends up protecting her as danger approaches. Mitsuki is gradually attracted to Shu because of his protection. The two of them who should not fall in love, have an unlikely romance.

Characters
Nakagawa Taishi as Onotora Shu
He steps into the shoes of his foster father Onotora Joichiro who was a legendary professional killer. As a rookie hitman with bad timing, he always ends up failing to deliver at critical moments. He has exceptional physical abilities, good looks and a kind personality which are the qualities that would make him a popular guy. However, this is unfortunately not the case. There is only one reason for that – his bad timing. Even though he is a pure and straightforward guy, he surely pulls through when it comes to the crunch.

Araki Yuko as Narumiya Mitsuki
The author of the very popular manga, Harinezumi Tantei Harry. A beautiful, strong-minded woman whose personal life is shrouded in mystery. Detective Wataya Shiori asserts that she is the real criminal behind Onotora Joichiro’s death. Since she has an extreme case of misanthropy, she has never made an appearance in public. But when she wins a major manga prize, she shows up in front of the media. This coupled with her beauty, attracts significant attention. She does not yet know that she actually has a “big secret” that will later cause huge ripples and shake the other characters.

Suzuki Nobuyuki as Yaotome Ryusei
A popular model who travels all over the world but is actually a professional killer with the nickname Death Prince and has a strong fixation with artistic ways of killing people. He is cool, smart, stylish and quite a narcissist. He has respect for death and his policy is to ensure that death is beautiful even for his targets. He gets involved in the murder of Narumiya Mitsuki after receiving a request from an organisation.

Mizuno Miki as Wataya Shiori
A career detective who normally belongs to the Tokyo Metropolitan Police Department’s Community Safety Division. She is a gentle and kind woman. But she actually manages the Secret Operation Service. She has known Onotora Shu since he was very young and looked after him. Even now she gives him emotional support and is also his confidant. She has a strong sense of responsibility and mission for her work. Watching the kind-hearted Shu, she repeatedly tries to persuade him to step way from being a professional killer while he is still able to do so.

Fujiki Naohito as Onotora Joichiro
He runs a cleaning company but is actually a legendary professional killer with the code name Gou no Tora. As the SOS’ top agent who has succeeded in many difficult missions, he has assassinated bad guys whom the police cannot bring to justice. While raising Shu, he began to reexamine his own life and eventually wanted Shu to keep on the straight path. He had thought that his next mission would be his final job as a professional killer. His last target was Narumiya Mitsuki. But someone turned the tables on him and he ended up getting killed.