Based on the original webtoon of the same name, ENA’s “Unlock My Boss” is a unique comedy thriller that depicts the story of Park In Sung (Chae Jong Hyeop), an unemployed job-seeker whose life changes after he picks up a smartphone that speaks to him and gives him orders.

On November 28, “Unlock My Boss” unveiled new stills that capture Park In Sung’s dramatic transformation from being unemployed to becoming a CEO.

The first photos capture Park In Sung’s mundane life as he works hard to get a full-time job. Although he dreams of becoming an actor, Park In Sung opts to be realistic and take up part-time work at a pizza shop instead. While sitting in his room surrounded by dozens of pizza boxes, Park In Sung looks lifeless and bored. In the next photo, Park In Sung appears nervous as he sits for a group job interview. 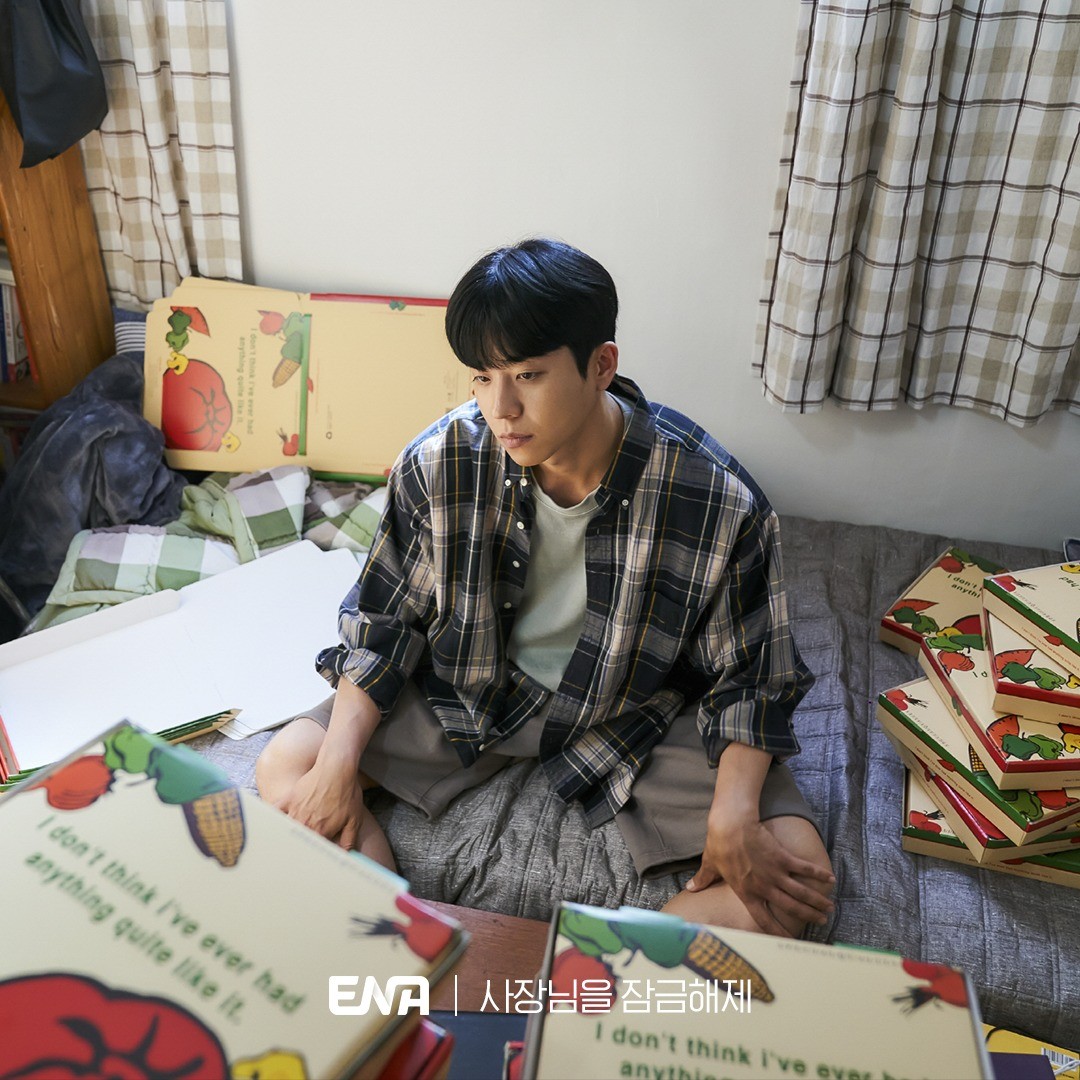 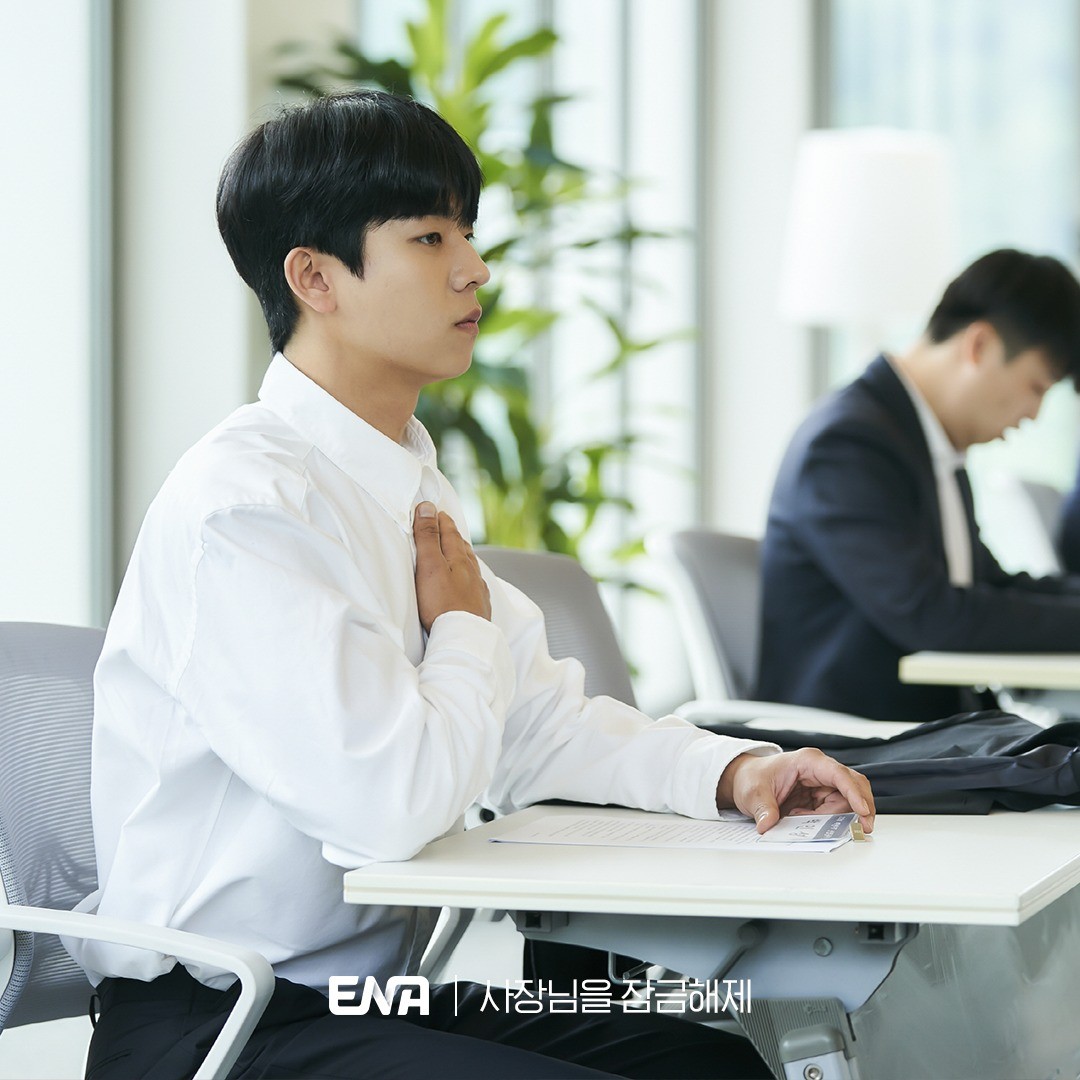 However, the third photo highlights a completely new side to Park In Sung. After randomly picking up a mysterious smartphone that has trapped the soul of Kim Sun Joo (Park Sung Woong), the CEO of a big IT corporation called Silver Lining, Park In Sung is miraculously given the chance to become CEO in his place. Despite the sudden change, Park In Sung adapts incredibly to the role with his perfect suit fit and confident gaze. With his wireless earphone in place, he’s also able to keep in contact with Kim Sun Joo and carry out their team play. 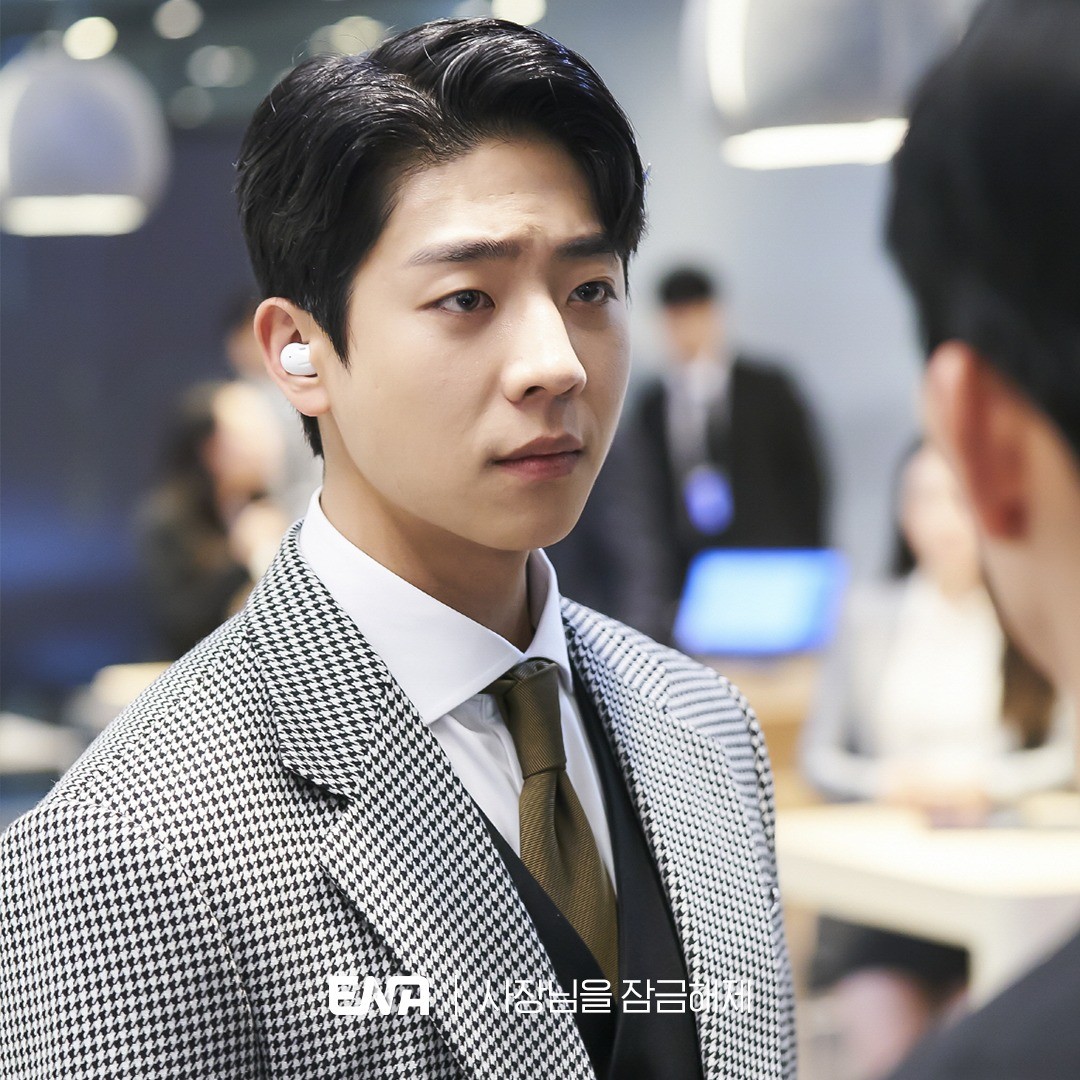 The actor commented, “To the point where I read the entire script in one sitting, the immersive development was so fun. The subject matter was new and I became excited thinking I’d be able to showcase a different side to myself.” Chae Jong Hyeop continued, “As the incomprehensible combination of a CEO stuck inside a smartphone, a job-seeker who must save him, and an unreadable secretary [played by Seo Eun Soo] combine strengths, their team play as they uncover the truth will be interesting.”

Regarding his character, Chae Jong Hyeop commented, “His nature in itself is clean and pure. He’s a colorful character who’s afraid of a lot, but has courage and is fearless. Since the character is an aspiring actor, there’s an aspect of needing a lot of talent in many ways. In order to portray these aspects well without being awkward, I’m acting while focusing and thinking in every moment.”

Lastly, the actor shared, “We will be able to vividly convey a different type of exciting fun from the webtoon. Please stay tuned to see Park In Sung’s activity as he becomes a CEO overnight after randomly picking up a smartphone, and how the comedic and thrilling development will unfold. I diligently did my best, so I ask for lots of views and interest.”

“Unlock My Boss” premieres on December 7 at 9 p.m. KST and will be available on Viki!

Watch a teaser with subtitles below!

Watch: Jung Kyung Ho Shows Off His Steps In “Kingsman” Parody While Jeon Do Yeon Proudly Presents Her Cooking In “Crash Course In Romance” Teasers

Watch: Jung Kyung Ho Shows Off His Steps In “Kingsman” Parody While Jeon Do Yeon Proudly Presents Her Cooking In “Crash Course In Romance” Teasers NCT DREAM’s Jaemin Talks About The Greatest Indicator Of His Growth, Person He Wants To Become, And More Key Reasons To Look Forward To The Final Episodes Of “Poong, The Joseon Psychiatrist 2” Watch: Kim Ok Bin And Yoo Tae Oh Kick Off A Complicated Contract Relationship Despite Their Bad Blood In New “Love To Hate You” Teasers