In a recent interview with Cosmopolitan, Choi Hyun Wook opened up about receiving the Best New Actor award, launching his acting career, starring in the drama “Twenty Five, Twenty One,” and more!

Choi Hyun Wook recently won the Best New Actor award at the 2021 SBS Drama Awards for his roles as Na Woo Chan in “Racket Boys” and Park Seung Tae in “Taxi Driver.” He admitted that something upsetting had happened to him during his acceptance speech. He explained, “Just in case, I practiced my acceptance speech at home a lot. But when the event happened, three people were chosen for the award. I decided, ‘Because the time is short, I should shorten my speech,’ but when I went on stage, I was so nervous that I stared at the ground while reciting what I memorized. I got cursed at in the comments for speaking too long.”

Despite this, Choi Hyun Wook expressed his pleasure at accepting the award. He said, “When I first started acting, I really wanted to win the Best New Actor award. I always imagined that moment inside my mind, and even more so because I thought the Best New Actor award was far away from me. It hasn’t been long since I started acting seriously, and I don’t think I’ve achieved much. After receiving the award, I felt a lot of pressure and responsibility.” 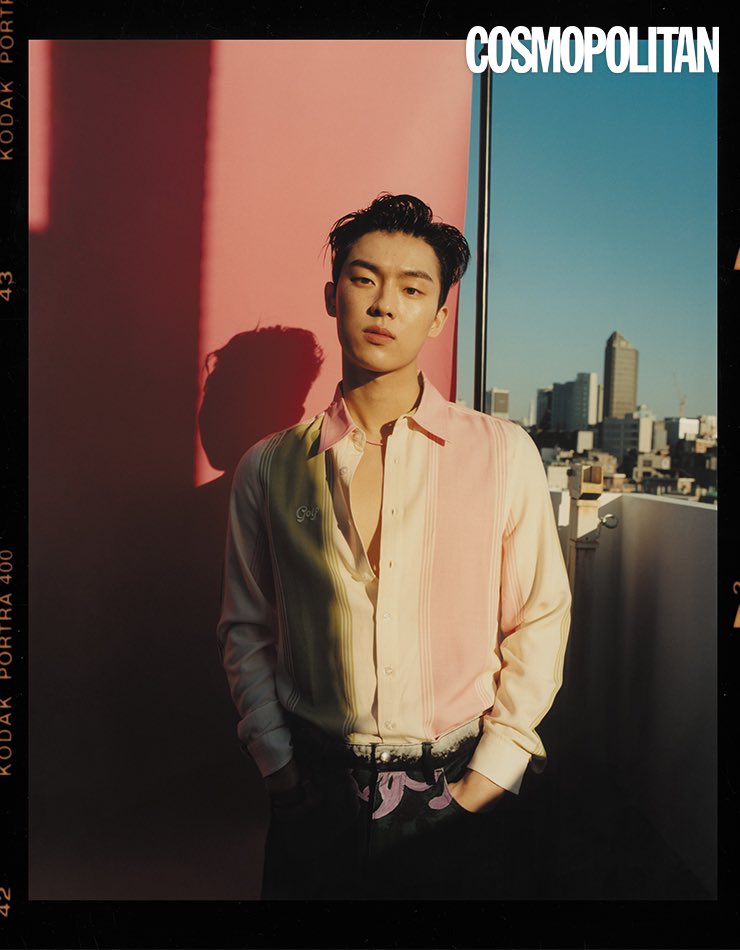 In high school, Choi Hyun Wook used to play baseball but quit after sustaining an injury. As a result, he started acting. He said, “[My personality] changed a lot. First, the environment is very different. At that time, I was in the process of preparing to become a professional athlete, but now I’m a full-fledged actor. There’s something that hasn’t changed since then. Intuition? I’ve always had good intuition,” explaining that he has good intuition for dealing with people in the real world.

The actor also discussed the thought process behind what he decides to post on Instagram. He explained, “When I post something, I’m so immersed into myself. When I read a book or watch a movie, I jot down phrases that I like. Especially when I watch foreign films, I memorize and take note of the lines in the native language. I alter what I’ve written down and upload it in my own way. I thought that my feed looked cool when I posted things like that. I was young, even though I’m still young now.”

Because of his love for movies, he often takes inspiration from them while immersing into the characters. He elaborated, “I think about how I would act in that scene if I am the main character. I say the lines at the same time as the actor on screen. Even when I watch a movie with someone, I mutter to myself.” 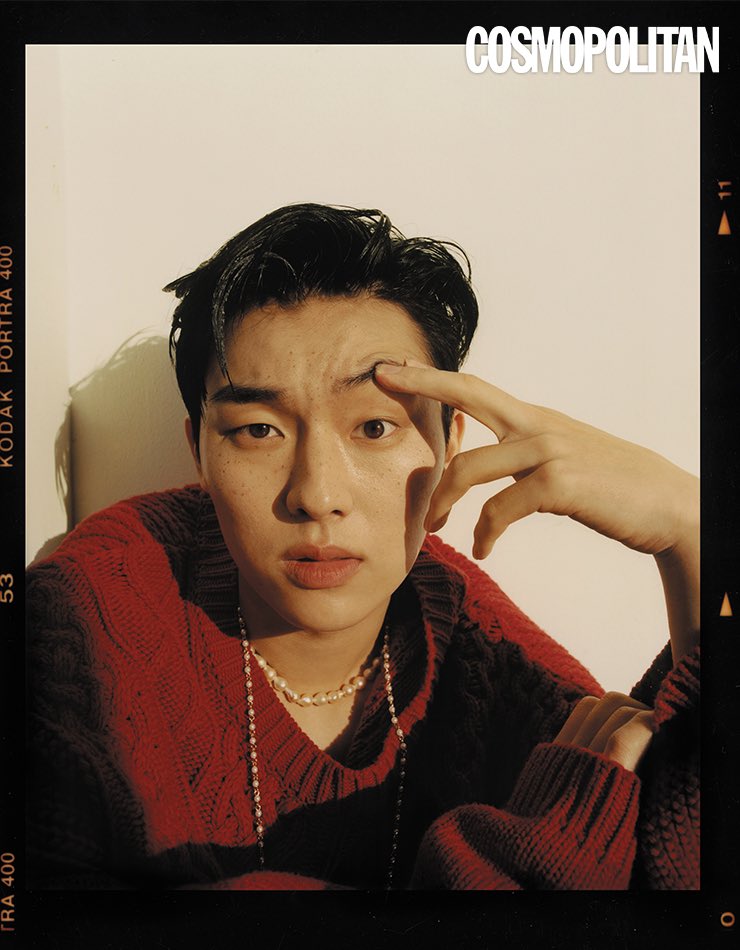 When asked about how he landed the role of Moon Ji Woong from “Twenty Five, Twenty One,” Choi Hyun Wook reflected on his audition process. He revealed, “It was midsummer, but I wore a leather jacket because Ji Woong is a fashion trend setter. Something that is even thicker than what I’m wearing now. When I’m nervous, my face sweats a lot. At that time, as soon as I started acting, sweat poured down my face. In addition, the director kept telling me, ‘Keep going,’ so I thought, ‘I failed it.’ But after I left, the director immediately said, ‘This is Ji Woong.’”

He continued to say how the role suits him because of his personality. He explained, “I think the goofy side suits me well. There are some funny parts of Ji Woong because he speaks straightforwardly. If something is pretty, he says, ‘It’s pretty.’ If he likes something, he says, ‘I like it.’ If he wants to be together with someone, he says, ‘I want to be together with you.’ [The director] said he liked me because I said those lines seriously. He said I was the funniest.” 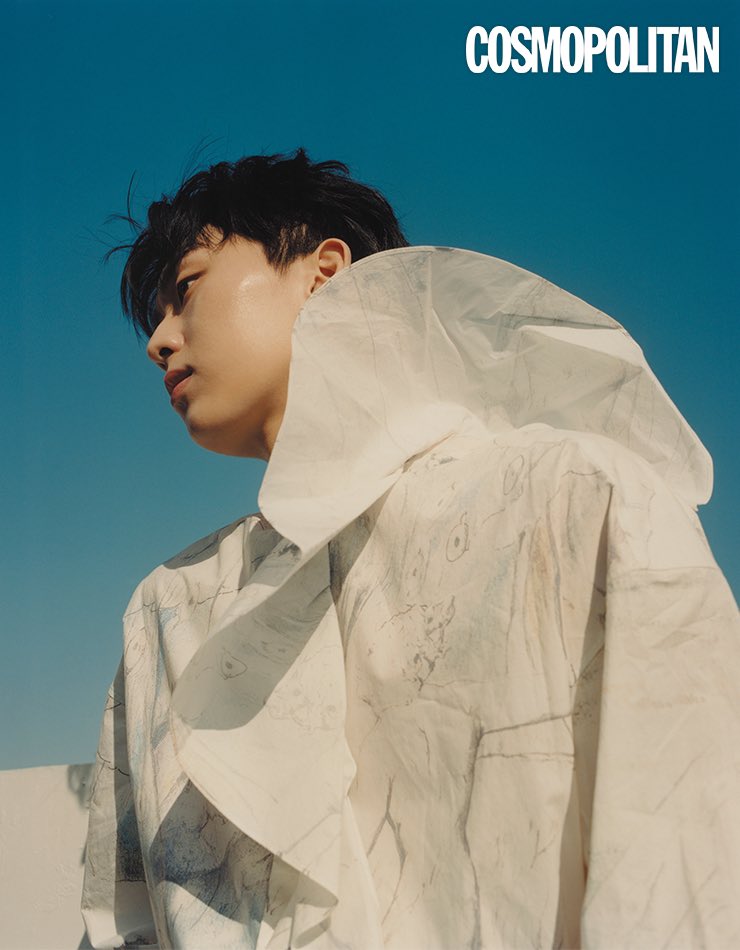 Afterwards, Choi Hyun Wook passionately described his love for food and eating. He said, “I cannot die because [I love] eating. Really. That’s how sincere I am about eating. Each and every meal is very precious. I always go to delicious restaurants nearby even when I’m on set. For a while, I was obsessed with cake and bread and looked for bakeries a lot, but these days, I crave Korean food. Rice with soup. I eat chicken regularly. Chicken is almost like a friend to me.”

Choi Hyun Wook is 21 by Korean reckoning and eager to play more roles to gain further experience in his acting career. When asked about what kind of person he wants to be at age 25, he said, “Hm…I want to be a well-rounded person. For example, I want to speak well. I wish I can be smart. Up until now, I’ve only played student roles, so I want to try more mature roles.”

Check out Choi Hyun Wook in “Pop Out Boy!“: