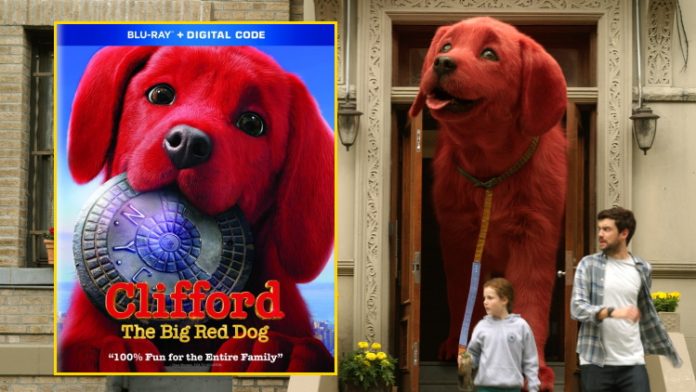 Clifford’s wide fandom means the film had some inevitable expectations and pre-conceived notions to live up to. Fans will likely be happy to know that the movie will entertain the elementary-age audience it is aiming for, while staying faithful to the source material.

Clifford the Bog Red Dog works because it doesn’t do what so many children’s films do these days. It isn’t trying to overtly sell us merchandise; it doesn’t feel like a feature-length trailer for the inevitable sequel, and it doesn’t try to “update” the characters for modern times. It’s sweet-natured and funny, and presents a simple moral tale about the importance of love, loyalty, and friendship.

That said, the film doesn’t break any new cinematic ground. Clichés and narrative archetypes abound: Emily (Camp) is a kid on scholarship at an elite private school where she doesn’t quite fit in, thanks to a rich kid who bullies her. A ruthless corporate CEO (Hale) is the big bad guy who wants Clifford to make money off of him. Random fights break out just to provide some conflict, and the finale is one big chase scene and inevitable speech in a public place, with a large group of people and police dropping everything to listen to it.

While the film relies on these clichés to provide some sort of a plot, the film is still a fun watch, because the screenplay by Jay Scherick, David Ronn, and Blaise Hemingway injects some genuine humor and sweet, heartfelt moments. The cast is quite good, led by Darby Camp (The Christmas Chronicles), who is pitch-perfect as Emily. Child actors in modern films often annoy me, because they overact and show little emotional nuance in their performance. Camp, however, projects authentic warmth and likeability in the lead role, which is essential when the main character is a CGI dog. She really makes the film work, even when some of the jokes don’t quite land.

Jack Whitehall (Jungle Cruise) doesn’t fare quite as well as Uncle Casey, the goofy, immature adult figure in the story (Emily’s mom is out of town for most of the film). He doesn’t have a lot of material to work with, admittedly, but his general silliness is too over-the-top for everyone but the youngest viewers.

John Cleese is great in his limited role as Bridwell, an animal rescuer who brings Clifford into Emily’s life. He brings the right amount of gravitas to his fairy godfather-like role, and he’s supported by a number of character actors and “Saturday Night Live” alums, including David Alan Grier (Jumanji), Paul Rodriquez, Tovah Feldshuh (“The Walking Dead”), Horatio Sanz, Kenan Thompson, and Russell Wong.

Clifford himself doesn’t quite come across as the warm, lovable character from the books and cartoons. He’s mainly there to look cute and create chaos, but he won’t really connect on an emotional level with kids, which is a bit of a letdown. The CGI for Clifford is serviceable, although what should have been the highlight scene featuring Emily riding him through New York City falls flat, thanks to some janky digital effects. At a time when CGI characters in movies are able to convey a bit more life and soul, Clifford doesn’t quite hit the mark.

Although silly and formulaic, Clifford the Big Red Dog is a funny, often heartfelt diversion that kids will love. Parents won’t mind it at all, and will manage a few chuckles of their own in a film that’s better than most other kids’ movies these days. It’s a solid choice for a family movie night, and a worthy addition to a Blu-ray collection.

Clifford’s Blu-ray transfer is pretty solid, delivering a sharp image and natural colors. While the picture was good, I found the high-definition transfer highlighted the inconsistencies in Clifford’s color. This was not an issue with the transfer, but with the shades of red the visual effects artists gave Clifford. Sometimes it was a darker crimson, and at other times, a brighter candy red. On top of that, the CGI artists often added a lighter sheen to the fur to make it look more realistic in the sun. I found these varying shades a bit annoying, but I doubt kids will notice it at all. I realize red is a difficult color to reproduce with consistency on-screen, and the fire-engine red Clifford has in the books and cartoons doesn’t translate well to film. I can’t fault the video quality for this, but it is worth noting.

The English audio track is in Dolby Atmos, and it sounds very good for a kids movie. There isn’t much low-end or seat-rumbling explosions to offer, but clarity is quite good and the music balances well across the channels. Paramount crammed eight additional non-English language tracks onto the Blu-ray, which is a nice touch.

I’ve always advocated purchasing a 4k/Blu-ray of a film you like, even if it is available on a streaming service you subscribe to. The main reason is you never have to worry about that film becoming unavailable on streaming at some point – a reality more and more viewers have discovered. In addition, both the video and audio are far superior on disc as opposed to online streaming. That isn’t a knock against the quality of service Paramount+ or any other streaming service provides. Any streaming service will compress the video and audio quality of the movie you watch in order to quickly deliver it over the internet without lag. While the movie will look and sound good, it will never be as good as the uncompressed presentation a disc provides. As high-end TVs and sound equipment get more affordable, the difference in quality becomes more apparent. Your kids might not notice it, but you’ll definitely see and hear the improvement.

The Blu-ray features a number of fun behind-the-scenes featurettes, which will answer your questions as to how they pulled off a 10-foot CGI dog in the film.

The bonus features are as follows:

“Acting is for the Dogs” featurette. Although Clifford is a CGI character, he did require two physical puppeteers to bring him to life. This featurette introduces us to Rowan Magee and Jon Riddleberger, the two on-set artists who provided the physical movements for Clifford that actors had to react to. It’s a very interesting look at how movie magic works. Running Time: 3:20

“The Magic of Bridwell” featurette. This fantastic featurette highlights the late Norman Bridwell, the creator of Clifford. Bridwell, who is shown in older interviews, discusses how he conceived the idea of a big red dog, wrote and illustrated the book, and finally had it published in 1963. Running Time: 7:11

“Tips & Tricks for Taking Care of a 10-Foot Dog” featurette. This tongue-in-cheek guide to dealing with giant dogs features a number of clips from the film. Running Time: 2:28

Digital Copy. A code for a digital copy of the film, redeemable at providers including VUDU and iTunes, is included. Paramount codes are not redeemable through the Movies Anywhere service.

Click here to order Clifford the Big Red Dog on Blu-ray from Amazon!

The Tuxedo Series Cast, Who Are The Cast In The Tuxedo?

The Oath Of Love Season 1 Episode 6 Release Date and Time, Countdown, When Is It Coming Out?

‘Gaslit’ Forged Information: Who’s Who within the Star-Studded Starz Sequence

Devil Sister Season 1 Episode 2 Release Date and Time, Countdown, When Is It Coming Out?

She Hulk Season 1 Episode 1 Release Date and Time, Countdown, When Is It Coming Out?

The Tuxedo Series Cast, Who Are The Cast In The Tuxedo?

The Oath Of Love Season 1 Episode 6 Release Date and Time, Countdown, When Is It Coming Out?

‘Gaslit’ Forged Information: Who’s Who within the Star-Studded Starz Sequence

Devil Sister Season 1 Episode 2 Release Date and Time, Countdown, When Is It Coming Out?

She Hulk Season 1 Episode 1 Release Date and Time, Countdown, When Is It Coming Out?