Tired of the quotidian birthday cake designs? Always having a circle gateau with fruits or chocolate on top? Take a look at some examples from SEVENTEEN members’ birthday cake blueprints. You may find inspiration for your next birthday from this article.

As the encyclopedia of SEVENTEEN, CARATs know that each member has their own favorite flavor or animal that represents the corresponding member. Obviously, since the boys have over 10 years of friendship, they know each other well too. This can be seen in the elaborate details of the birthday cake preparation and how unique the designs of the cakes are. Some of the ideas were contributed by CARATs and the members. They were adopted by the company and turned into actual birthday cakes. 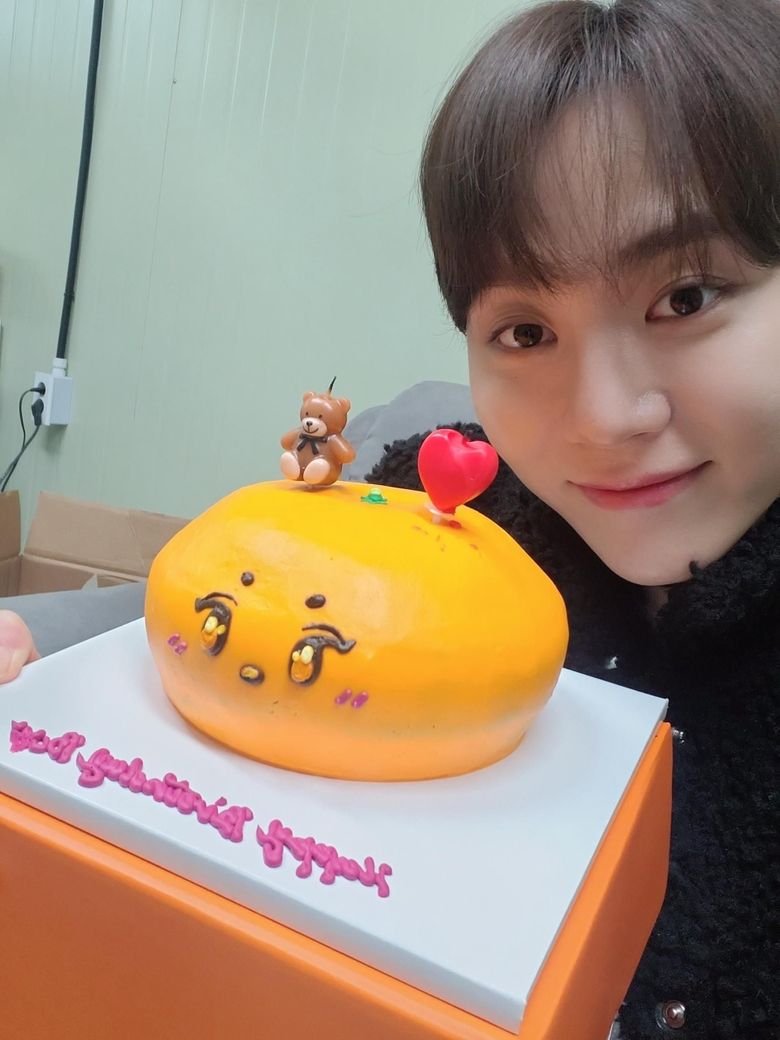 SeungKwan just recently celebrated his birthday on Jan. 16. As seen from the photo, his birthday cake was an orange-like configuration. There is a story behind SeungKwan’s relationship with tangerines, not only because he is from Jeju Island, which is famous for producing tangerines. But SeungKwan is also praised for his benevolent deeds as a “tangerine distributor”. Once, when SEVENTEEN was going to appear at “Music Bank” in the early morning, SeungKwan brought tangerines that his father sent from Jeju Island for him to share with everyone, and he gave them to the hard-working, early riser photographers and reporters. Moreover, on one of these occasions, DK had to use an adjective to describe each member, and he described SeungKwan as a tangerine. SEVENTEEN’s maknae Dino’s birthday is around the corner (Feb. 11) and CARATs are wondering what kind of cake he will receive this year. Last year, Dino’s cake was an otter that resembled him. In addition to occasionally receiving stuffed otters at fan-meetings, Dino was also teased by the editors of “Going Seventeen” by photoshopping him with an otter. At CARATs’ initiative, the Chester Zoo in the UK actually named one of the newborn otters after Dino and the scenario got more hilarious as this coincidentally matched with one of his nicknames “baby otter”. 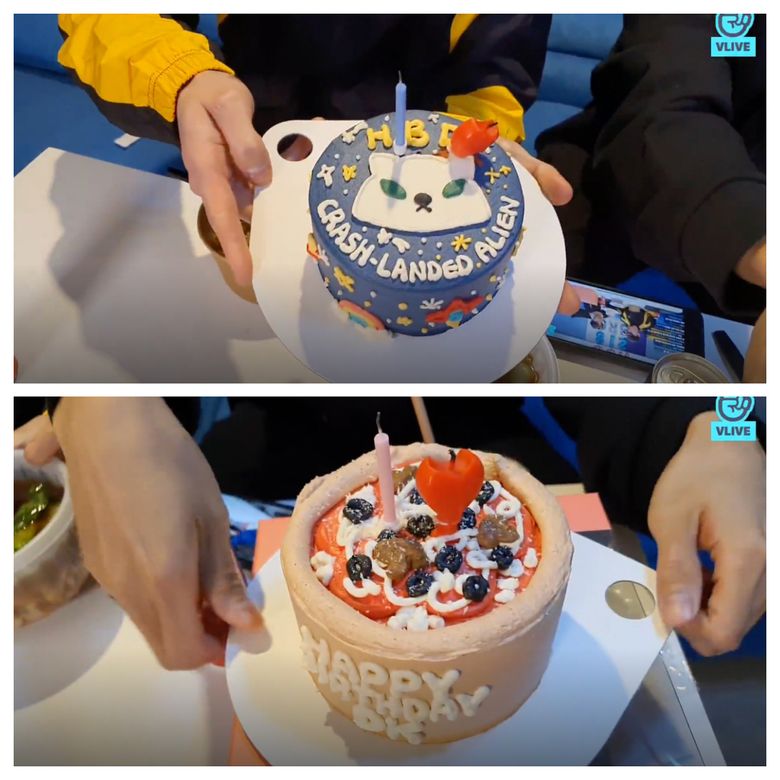 Born on Feb. 18, the “218 bros” DK and Vernon always celebrate their birthdays simultaneously. Last year, while the agency ordered two birthday cakes with identical cheesecake flavors, the two members’ cakes each had completely different and unique designs: Vernon had the alien polar bear cake, and DK had the pizza birthday cake. Vernon was always mocked by members and staff for his unique way of thinking, e.g. wearing red sunglasses and telling the members not to write with a red pen because he can’t see. Maybe that’s why the company decided to give him an alien cake to compliment his idiosyncrasies. As for DK, he always likes pizza, especially pepperoni. He always introduces himself as the “Pizza Boy”. The cake satisfied his cravings for both pizza and birthday rituals at the same time. 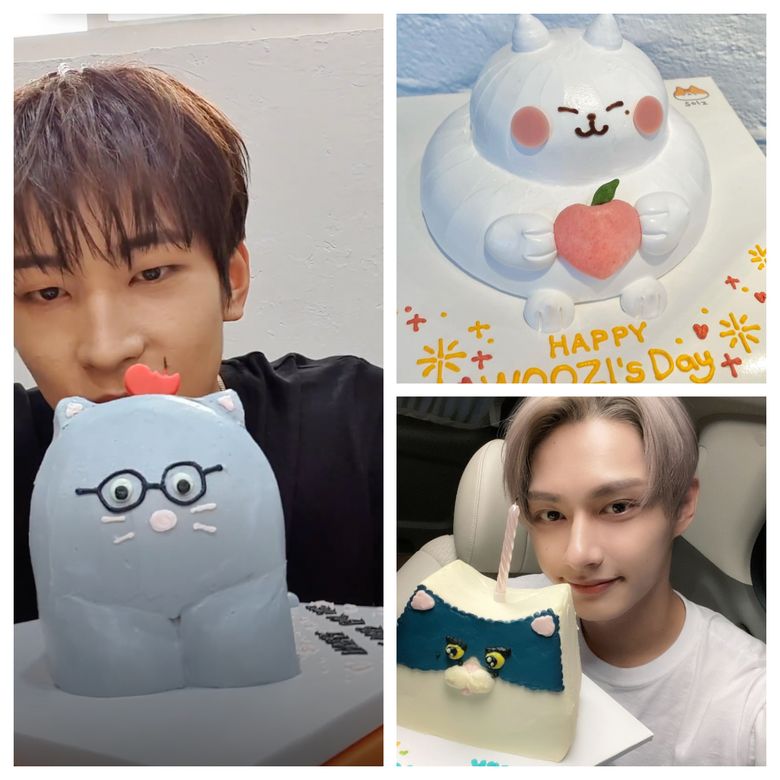 Although Jun was born on Jun. 10, WonWoo on Jul. 17 and WooZi on Nov. 22, the trio happened to receive birthday cakes with a cat as the prototype. This is because the three are very fond of cats and CARATs often compare their traits and characteristics to those of cats: adorable and friendly to the people whom they are comfortable with. They even have an unofficial alliance named “the cat-line”. Their “cats” were also all discrete. Jun’s cat was blue and white with big shiny pupils; WonWoo’s cat wore glasses because his master also often wears glasses; WooZi’s cat held a peach with blushing cheeks, symbolizing his cute aegyo. 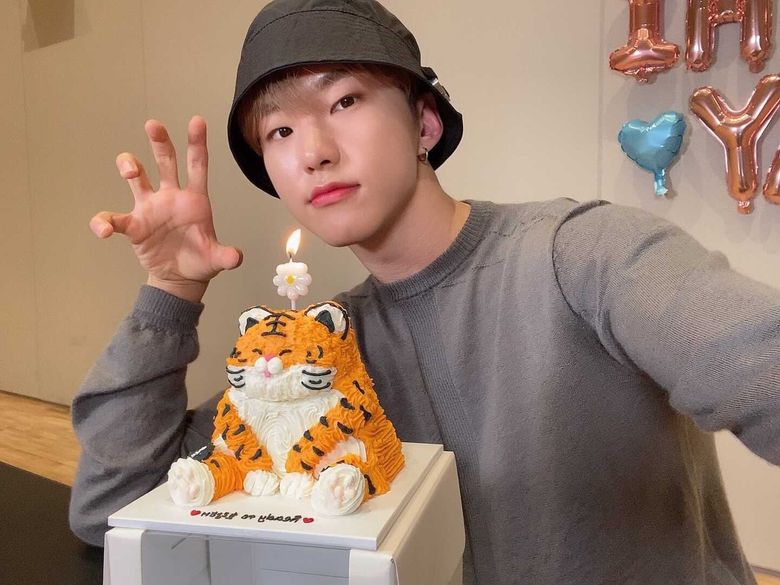 Hoshi is a fervent fan of tigers. His stage name is derived from an abbreviation of “Tiger’s Gaze” (in Korean). He loves everything about tigers, and no matter how many times the members tell him that he is a human and not a tiger, and that CARATs always juxtapose him with a hamster, none of this can resist Hoshi’s passion for tigers. To prove how much Hoshi loves tigers: he wrote a song called ‘Tiger Power’; his surroundings are full of decorations related to tigers, such as phone cases, cushions, soft toys, etc. His signature greeting is “horanghae” (tiger loves you in Korean), with hands curled up like the paws of the tigers. Therefore, it’s no surprise that he also received a tiger birthday cake. 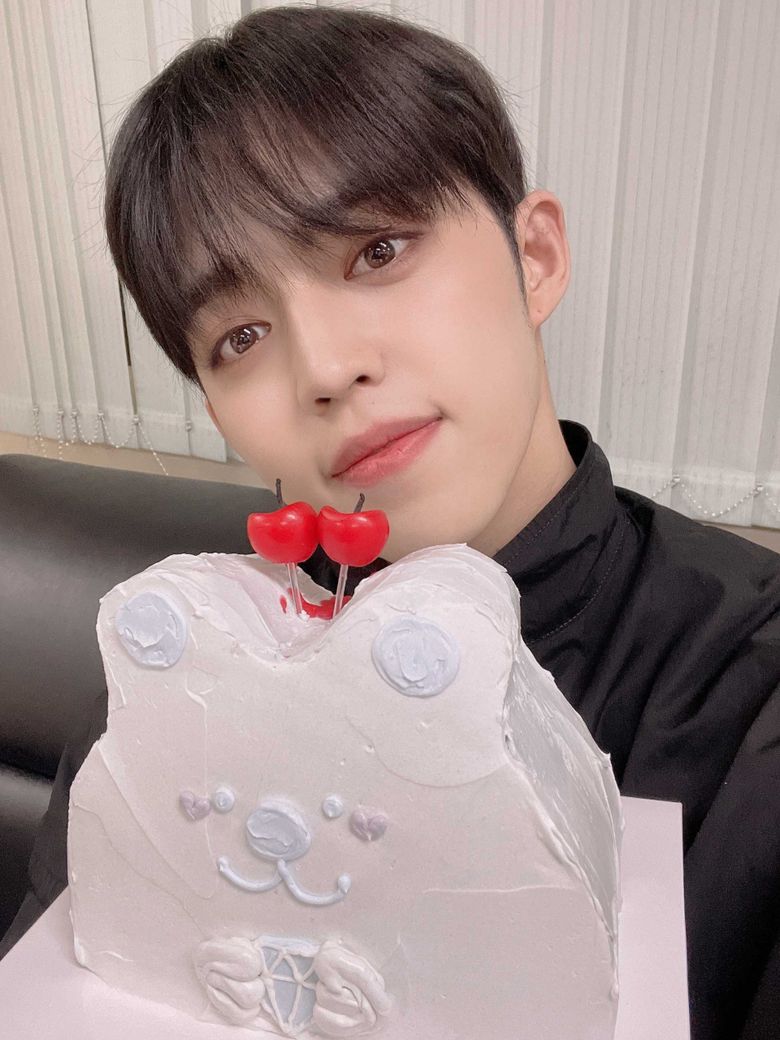 CARATs are aware of how marvelous S.Coup is as the leader of SEVENTEEN and how much he values CARATs. Once, S.Coups reflected that CARAT Bong (the fandom’s lightstick) was a bit dim and he was worried that it was not bright enough to accompany CARATs home after the concert. As a result, the agency reintroduced the second generation of CARAT Bong, which is now much brighter than the previous one. To emphasize S. Coups’ cherished CARATs, his birthday cake was a white bear holding a diamond (carat). The cherries on top echo his nickname Cheollie (similar to the pronunciation of cherry). 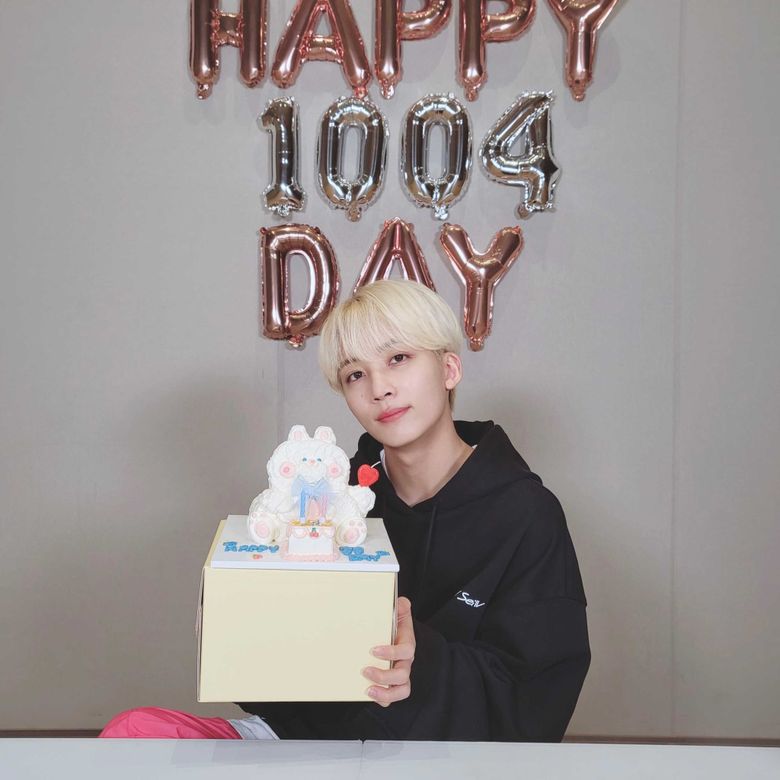 JeongHan, who was born on October 4, is not only an angel of SEVENTEEN (the pronunciation of 1004 in Korean is similar to an angel), but he is also a rabbit lover. As seen from the photo, JeongHan’s birthday cake was a white and pink rabbit with blue ribbons on top. In fact, CARATs tend to associate JeongHan with Snowball, the bunny from “The Secret Life of Pets”, because they have kindred facial expressions. One can find a lot of “JeongHan as Snowball” threads on Twitter. THE8 is known for his vehemence for frog figures, especially “Kermit the Frog” in “The Muppets”. CARATs often find that he has frog-related items with him when filming V-Live or Vlogs, such as frog eye pads, mini frog plush toys, etc. To satisfy his love for frogs, the company gave him a gigantic birthday cake with the avatar of a frog. THE8 couldn’t help grinning after seeing the cake design, because this “frog” has large opalescent eyes and a golden crown, which was very endearing. 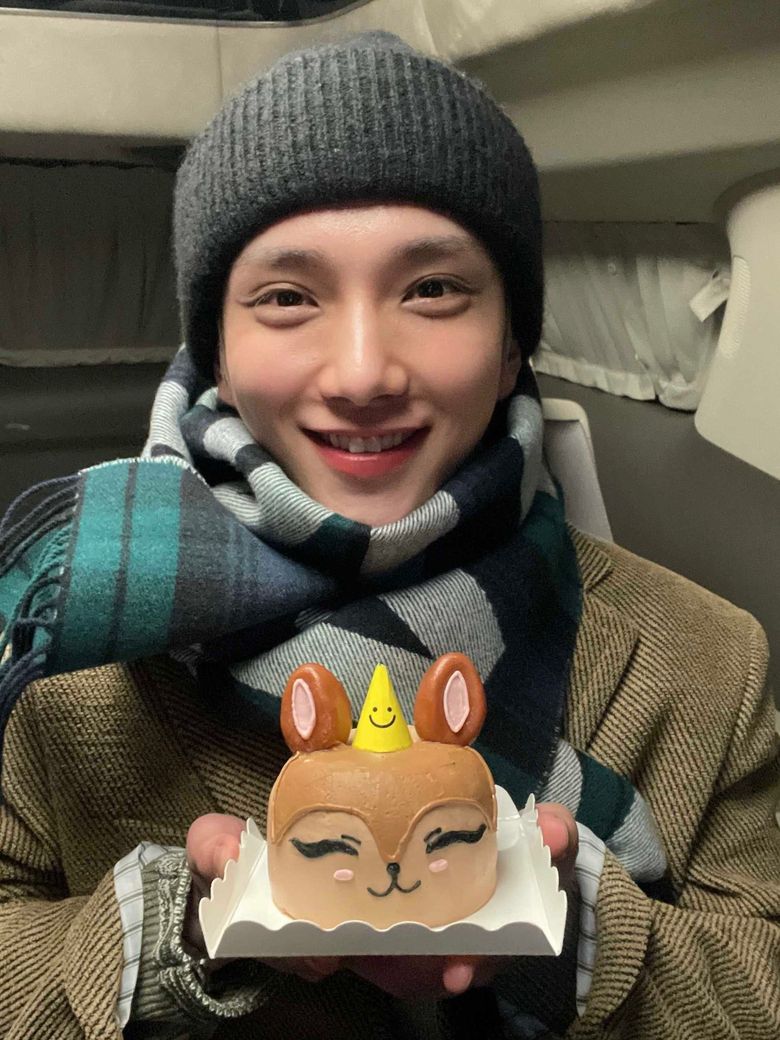 Joshua is associated with many characters such as rabbit because of his bunny teeth, and Cinnamoroll & Eevee because of his :3 lips that curve upward. But he is especially similar to Bambi because of his doe-like eyes. Maybe that was the reason why the staff gave him a reindeer-like birthday cake. Many CARATs consistently agreed that the quintessence of the cake is very similar to Joshua, especially the eyes and lips. The cake was literally a copy and paste of Joshua’s facial features.

It’s a pity that MinGyu didn’t celebrate his birthday publicly last year due to controversy, and CARATs didn’t get to see his personalized birthday cake. But let’s hope he’ll get a splendid birthday cake this year, and let’s look forward to birthday cakes for all SEVENTEEN members in the coming months. Do you know any creative birthday cake ideas from other K-Pop idols? Let us know in the comments!

Reservation Canine Season 2 Launch Date and Time, Countdown, When Is It Coming Out?

The Weakest Link Season 5 Episode 5 Release Date and Time, Countdown, When Is It Coming Out?

Reservation Canine Season 2 Launch Date and Time, Countdown, When Is It Coming Out?

The Weakest Link Season 5 Episode 5 Release Date and Time, Countdown, When Is It Coming Out?