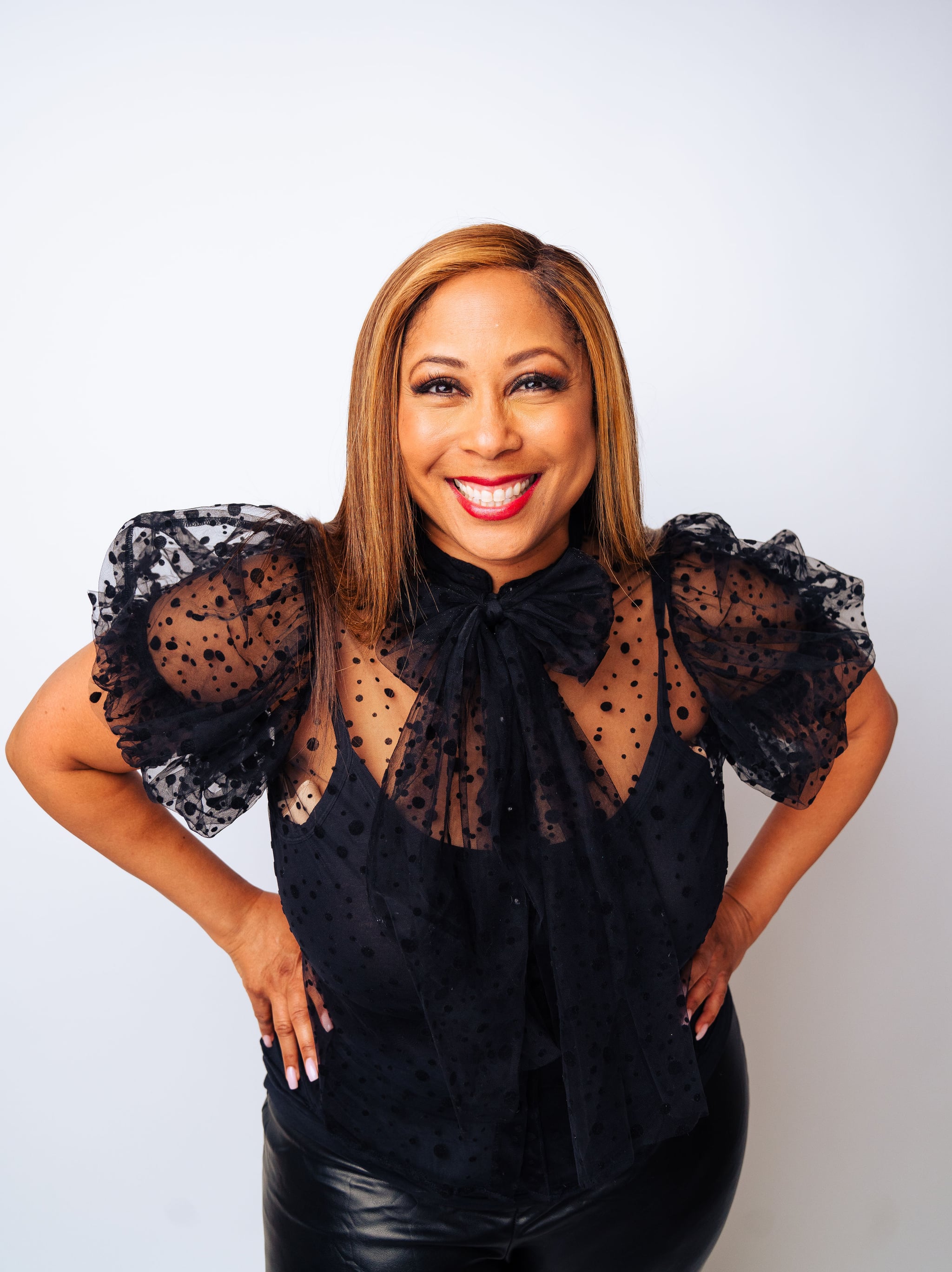 Darla Miles is an Emmy-winning reporter for WABC-TV in New York City.

My fertility journey has been a long and difficult one. That’s why I’m telling it, because I want younger women to know the truth. Now, I tell people, save for your family like you save for your 401K. And after hearing my story, you’ll see why.

When I met my husband, we both knew we wanted to have a family. And I think like most couples, pregnancy had to fit into a certain timeframe, depending on what was going on with career, finances, housing. But we were misled — we thought it was like, add water and stir and have a baby, that when you want to have it, boom, you can have the baby. It was a very misguided approach.

I was diagnosed with rheumatoid arthritis in my early 30s, so I did know that was something that needed to be managed. But as I got into my late 30s, it presented more of a challenge than I thought it would.

Meanwhile, when I was in my 20s and 30s, egg freezing wasn’t an option. And when it was available, it was like $30,000. It was always unattainable. Now we have all of these advances. People buy handbags that are more expensive than a retrieval cycle. So for anyone who wants to have a family, they’re misguided by the fact that they are going to be able to pop out a healthy baby along their timeline — look, if that works, that’s great. But otherwise, you’re setting yourself up for eternal disappointment, because once you can no longer have a child, that’s a regret you can never, ever fix.

My first miscarriage actually happened before I got married. It was when we moved to New York in early 2010. We were already engaged, and I was switching over health insurance and there was a lapse in taking my arthritis medicine. And one of the medications I took was methotrexate, which is a drug that is used to terminate ectopic pregnancies.

Now here I am as his wife, I’ve lost three of his children, and I don’t know what else I can do.

I remember it clearly: I was on the medication, but my body felt a little different. And I ignored it. I took the medication, and literally a week later, I found out I was pregnant. My fiancé and I were engaged, so it was like if we’re going to have a family, let’s do it. Within a matter of days, I started spotting and I knew why; it was because of the medication I had taken. And so that first miscarriage was operator error. I didn’t think it would be a challenge the next time.

The next pregnancy happened after we got married — in early 2012. After the first miscarriage, I went to my rheumatologist, I went to a fertility specialist, I even went to a specialized center for women with rheumatic diseases. And being the reporter that I am, I thought I was equipped. I had eight million doctor’s appointments to make sure I was managing the rheumatoid arthritis directly. I was off the methotrexate.

But before I hit 12 weeks, I had another miscarriage. And this miscarriage was very devastating because I was literally broadcasting on the air in Fort Hamilton, Brooklyn. And I felt things happening, and I had no place to go to the bathroom. It was demoralizing on top of devastating — I felt alone in the moment because I was still stuck on the scene for a few hours, and I remember walking blocks and blocks and blocks just to find a ladies’ room.

So now we’re like, OK, we’re going to a different fertility specialist, we’re prepared. And then it took forever to get pregnant. That hadn’t been the issue before, but this time, it took a while.

In November 2013, I was pregnant again. We were settled, we had been in New York for several years. We literally had just built a brand-new home, we had the white-picket fence. I was born on Thanksgiving Day, and my husband asked, “What do you want for your birthday?” and I said, “I have everything I want. There’s nothing you can buy me in a designer store that I would want more than having my husband and a child and my home. There’s nothing you can give me of greater value than having a family.”

And then the second week of December, we went for a checkup, another sonogram, and they could not detect a heartbeat. And it was like I was in a black hole, like the words were reverberating. Because in your mind, you’re wishing it’s operator error and that there is a heartbeat.

The reason it was so devastating for me this time was because as a wife, I was feeling so guilty. I could see my husband’s face, even though he was trying to be strong for me. Now here I am as his wife, I’ve lost three of his children, and I don’t know what else I can do. What other doctor can I go to? I knew my husband: he was heartbroken but trying to be strong. He had to grieve, and I let him grieve.

Then, a week later, he had a catastrophic stroke.

Talking about it now is really the first monumental sense of healing I’ve had in almost nine years.

We were home that night, he was doting on me the way he always would. I’m in bed and I’m resting after the D&C. And all of a sudden he’s flopping around the bed, violently. I get up, and he says he has a headache. I’m still groggy, so I give him a bottle of water and an aspirin, and he drops the bottle of water and his eyes are dancing.

It was like someone lit a fire cracker in my ear, because my instincts were so heightened. And I knew something was going on. I said, “I’m going to call 911,” but he said “I’m OK,” because he was a superhero. I said “Get up and try to walk,” and I grabbed his arm and tried to help him up. As soon as he put one foot on the ground, he just fell. He was in the ICU for a week. He went to rehab, but he had a pulmonary embolism and his heart stopped and he died. He died Jan. 7, 2014.

So at this point, it’s like a football game — my dad was a football coach: I was losing in the first quarter, and I said, “It’s OK, I’ve got the second quarter. I didn’t have the turnover in the second quarter, that’s OK, we still have halftime. Now we get to the third quarter, I’m on the scoreboard, but I’m behind a little bit. Now we get to the fourth quarter, and I’m not on the board and the game is over.”

All of those losses really were not grieved because I was still in the game. When the game was over, I was like “Wait, I lost three kids and I lost my husband.” I was grieving four deaths at once. Talking about it now is really the first monumental sense of healing I’ve had in almost nine years.

Now I’m 47, and the world is zooming in on me. I had a meltdown in September, because my period was like a week late, and I went back into the abyss of grief that I had when my husband died. I was like, “Wait, I’m 47 — am I in menopause? Do I not have eggs left?”

Your life plan isn’t a roadmap.

I have a great tribe though, so it was like, go talk to my friend who got pregnant at 50, talk to this person. All these people surrounded me and said, “Look, I defied the odds, do not listen to the doctors.”

My friend had a wonderful, safe pregnancy at 50. She went to New Hope Fertility Center in Columbus Square — it’s Chinese medicine, they’re considered very out-of-the-box. So I go to the head physician there. I tell him everything, and he goes, “OK, it’s worth it to try.”

And we have done multiple retrievals. I have eggs in the bank. I have my savings account. I still don’t know what I’m going to do in terms of next steps, but I have my 401K.

For me, no is always the first answer, it’s not the final answer. Your life plan isn’t a roadmap. Undoubtedly, there is going to be something that is going to detour what you envision for yourself. Embrace it. Embrace it because you’re stronger and better for it.

I think sometimes young women think, oh my god, I need to stick to my plan, I need to accomplish all these things before I’m 30 — but where is the pressure really coming from? Because here’s the thing: there’s always someone doing better and there’s always someone doing worse. It’s how you own your situation, it’s how you carry yourself. Own it, don’t let anyone tell you how to feel, don’t let anyone tell you how to think. If you want to start freezing your eggs at 17, freeze your eggs at 17. If you want to get pregnant at 57, get pregnant at 57. If it makes you happy, who cares?

— As told to Lena Felton

16 FAO Schwarz Toys You Can Get at Target Right Now

Joey The Wagon Review With Photos

16 FAO Schwarz Toys You Can Get at Target Right Now

Joey The Wagon Review With Photos 17 Gifts For the Mom Who Buys Everything From Etsy 20 Host Gifts Party Throwers Will Be Obsessed With Short on Time? These 22 Gifts Will Make Any Teenager Smile and Arrive by Christmas!