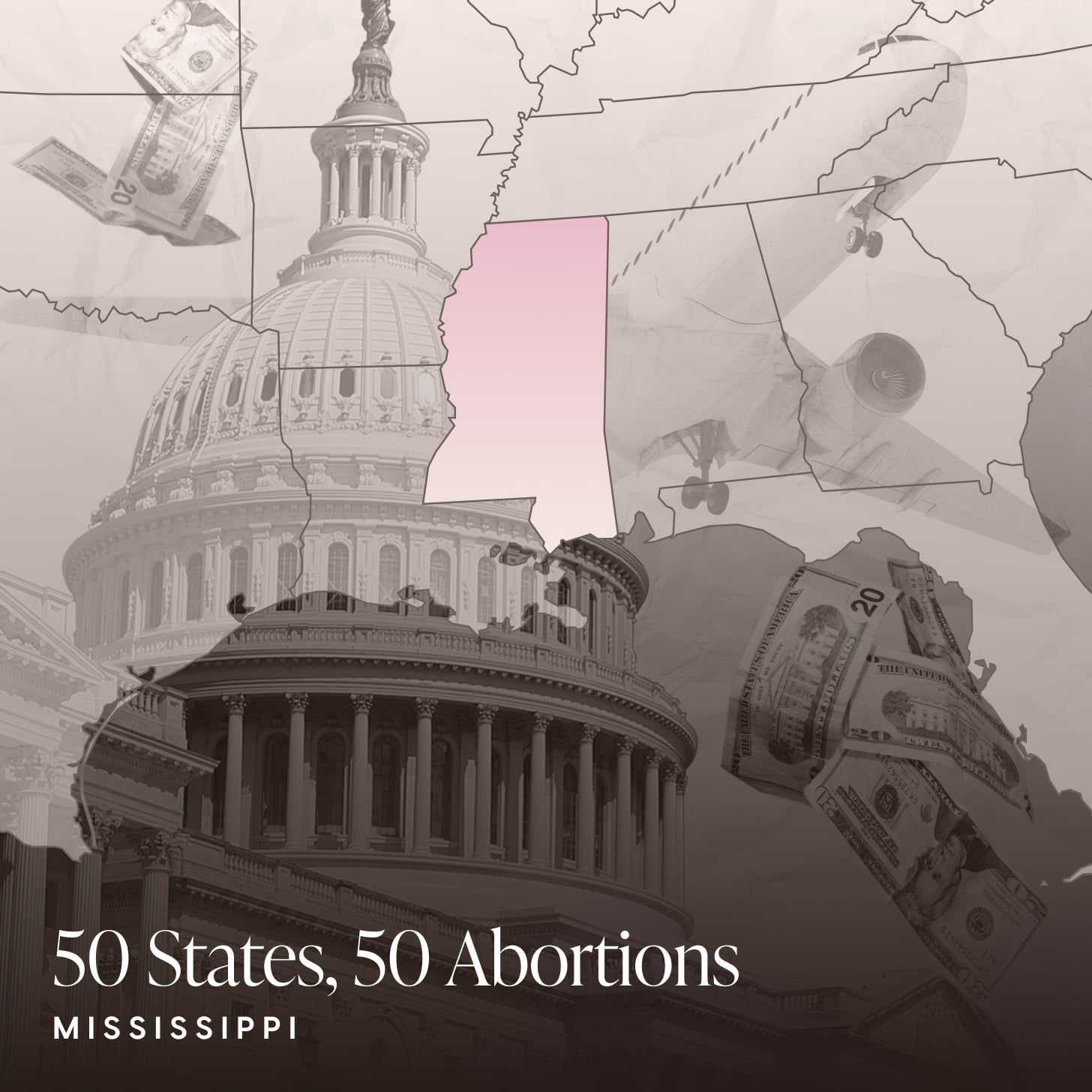 I was an 18-year-old freshman in college. Actually, I had the abortion about three weeks after my 19th birthday, but I discovered I was pregnant when I was 18. Let’s see: high school boyfriend, still dating freshman year. Not on birth control, not very smart of either one of us. I discovered I was pregnant after a year or so of having unprotected sex. It was not a surprise, but it was kind of a surprise.

When I found out I was pregnant, it was not a question. I just called him up and was like, “Hey, I’m pregnant, and I’m not going to keep it. I don’t want to keep it. So let’s make an appointment and go get an abortion.” He stalled for a second and was like, “OK, let’s do it.” He was a lot older than me, 23 or 24.

On the day of the appointment, we were expecting a lot of protesters. But there was just an older white lady who approached me outside of the abortion clinic, where there was very tall fencing. She put her hands around what looked to me like prison bars and said, “Please, please don’t kill your baby. Please don’t kill your baby.” I remember thinking, “Lady, this is not a baby. I am an 18-year-old, and even I know that.”

I went in, and I was struck by how busy the place was. It was jam-packed, with a waiting room full of men. We pregnant people went to the back, and it was full of pregnant people as far as the eye could see. We sat in this little room, and they gave us each two pain pills and said, “Take these so you won’t be in pain during the procedure. And by the way, we’re backed up. It’s going to take a while.”

So we all became friends in this room, and we all told each other our stories. Some of the stories were heart-wrenching. I felt so lucky to be in the situation I was, as wild as that sounds. Because for me, it was just a simple: “I am not ready for a baby. I’m a teenager.”

So we were telling our stories. And I remember clearly an older woman who was like, “Yeah, I’m 48, and it’s just too late in life for this. My partner and I were having a good time. This is not at all what we need.”

About six hours later, long after the medicine had worn off, I finally got my turn. I went into the exam room, and it was a very stark contrast to the jovial atmosphere of camaraderie and relief in the waiting room full of us women where we were all high on pain pills. I was in the military, too, and I would liken it to boot camp — the same sort of bonding moment.

I only saw a male doctor. He did not greet me. He was very stern and said, “Take your clothes off, and get on the table.”

So I did. I asked him, “You mean bottom down?” He just stared at me. He did not give me an answer. I thought, “Oh, OK. I’ll just do what he said to do.” It was very paternalizing. After that, the procedure started, and it’s not pleasant. Having a thing sucked out of you is not a pleasant procedure.

Although I don’t recall it, I must have been whimpering, because he stopped midprocedure and asked, “Are you whining because it hurts, or are you whining because you’re sad about your choices?” I had my head turned away from him and from what was happening. But when he said that, I turned back to look at him and replied, “I’m whimpering because this is painful. It’s been six hours since the pain medication.”

He had no expression on his face. He just flipped his machines back on and continued doing what he was doing. When it was over, they handed me a piece of paper listing all the things that might constitute a complication or an infection and when I should go to the ER. The doctor basically pushed me out of the room. Literally, as soon as I got my clothes back on, he pushed me out the door.

I crossed the hall, and there was my boyfriend, who had been sitting in the same spot for about eight hours. I was relieved, and we left. That’s it.

I don’t remember how long they told me to take it easy, but I was a freshman in college, so I wasn’t going to lay low very long. I would say it was maybe a week before I fully recovered.

I was never emotional about it. I recognize that for some people it’s not that simple, and it is a very emotional experience. But the only time I ever got a little emotional was almost 10 years later when I had my daughter. I was at home taking care of her when I realized the things I had missed by not having that child. It was just a moment of, “Oh, wow. If I’d had that child, I’d probably never have this one, and I’d never be here. I never would’ve done this. But look at all the things I’d have missed out on.” It was a little bit of a wistful moment after my child was born, but never before or after. I just knew it was the right decision.

My relationship with my boyfriend after the abortion was not the same; it was an enlightening experience, and we broke up. It was like, “Hey, we’re very different right now. I’m in college, away, and you’re 23, 24 years old, still living with your parents, not progressing, not thinking about doing anything more than what you’re doing, and I want to go out and see the world. The abortion was just something that happened that let me know that’s for sure true. So I’m going to have to let you go, too.”

Looking back, I don’t think I would do anything differently — except maybe I would be honest with my parents. Maybe I would tell them both the truth, in the moment. I definitely was afraid of their judgment, especially on my dad’s side.

I did tell them afterward. My dad was like, “I knew it. I saw the physical changes in you, of course.” My mom’s immediate response was a sigh of relief. She said, “I wish you would’ve told me. I would’ve gone with you.” And I thought to myself, “You were the last person I wanted with me.” My dad’s new wife was judgmental, and she used it to compare me to her daughter and remind me what a mess I was.

I’m grateful for the opportunity to make this choice in my life. I would’ve been 19 with no job and no financial security or safety. And I’d be living off my parents or off his parents. I’d always be stuck with him. I did not want that for myself. I wanted to get the hell out of the Deep South. I love it, it’s my home, and I’ll always return to it to visit. But I definitely don’t want to live there, and I definitely did not want to raise a child there.

At the same time, I’m grateful that my boyfriend was supportive and that I did not have to explain or defend myself or beg for his support. If I had to, I would’ve gone alone, no doubt about it. But I’m glad I didn’t have to. And I’m thankful that both sets of our parents were supportive when they did find out.

Obviously, I would tell my younger self, “Stop being a dummy; you know better. Stop having unprotected sex, duh.” I have a 15-year-old daughter. We openly discuss this, and she knows about my abortion. She understands the consequences — I hope she understands the consequences, and we discussed the consequences — of having unprotected sex. Not just pregnancy, but also STDs and everything else. We discussed that I’m a safe person she and any of her friends can talk to about things like this.

As for Roe, get me on the soapbox. I think it’s just an ongoing war on women. It feels like a way to control women. It’s definitely a way to financially limit women. We couldn’t even get our own credit card until what, 1974? This is a way to just keep a woman barefoot, and pregnant, and in the kitchen, and at home raising babies, and not out in the world, like in “Mad Men.” It’s to keep us out of men’s hair, so to speak — out of competition with them for jobs, education, and all of the things that we were not free to pursue until the ’60s and ’70s. It’s a rollback to another time.

Every time I see a conservative man pontificating on Twitter, it looks like they want to go back to the ’50s. It’s not lost on me, or on most of us. It’s depressing as hell, and I hope it changes. I can’t believe my daughter is going to grow up with fewer rights than I had at her age.