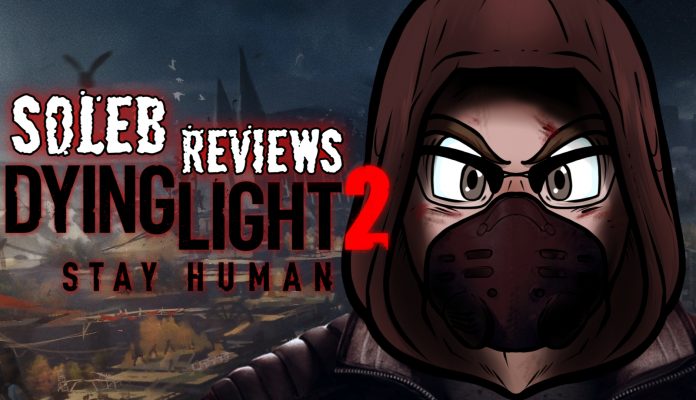 We take a look at Techland’s latest zombie action-adventure game, Dying Light 2: Stay Human, to see if the sequel is worth the hype or dead on arrival.

For years, Techland has been known for its hand in creating some of the best zombie titles on the market. Games like Dead Island and Dying Light have changed how we look at zombie survival games forever. When Dying Light 2 was announced the world rejoiced, but after having our own version of “The Fall” happening in the real world, the highly anticipated title Dying Light 2 was delayed time and time again.

This gave the team amply time to make even more fixes to the game and bring us the best version of something they have poured their hearts into for six years. With that said, does Dying Light 2 live up to the hype…or will it turn on us like a Viral in the middle of the night? Let’s find out…

THE VIRAL FEELING OF A THRILLING CAMPAIGN

Dying Light 2 is set 15 years after the fall in Harran and you play as a Pilgrim named Aiden. As you make your way into the last human-occupied city on the globe, Villedor, it is your goal to find a psychotic doctor name Waltz who ran tests on you, your sister, and many other children before the fall. With your sister Mia still missing, the tone for this expansive game is set fairly early and had me on the edge of my seat from the very beginning. Though the main story is focused around Aiden finding his sister and stopping Waltz, this story has much more to tell players. There is a battle for supremacy in Villedor between the Peacekeepers, Survivors, and Renegades, that comprises hours of side-quest which breathes so much life into the world.

As you make your way through sections of Villedor, you are given the choice to help these factions and the people living through this hellacious drama. I found myself diverting from the main story multiple times to help the people of Villedor. This didn’t just make me feel like a better person, it was extremely rewarding with XP boost, weapons, cosmetics, as well as materials for crafting items. With the additional side-quests between missions, I didn’t feel like I was doing the same things over and over again while playing the main story. That said, there were times that I would find myself feeling like I had already taken on the same challenges in the main quest as new missions would arise. I’m not saying the main storyline was repetitive, but there are times when the story is a bit too predictable. I suggest you take on multiple side quests during the main campaign to help alleviate this.

By doing so I really felt like the pacing of the game’s story was drastically changed and made my choices in the main story campaign feel much more meaningful. Though the story was sometimes predictable, there were a number of twists that made some of the most thrilling story moments in the series thus far.

For instance,  I decided to give control of water for an area of the map to the Survivors instead of the PeaceKeepers. Doing this gave me access me more parkour areas, glider vents, ropes to ride from building to building, and more. Now, if I would have chosen the Peacekeepers instead I would have had more access to weaponry placed throughout the world to take down the virals occupying this area of the map. This type of option in the game makes your choices feel like they matter. The type of player you are will change your experience in Dying Light 2. The story will not be the same for each player, depending on your choices the story outcome with be vastly different for main players, which highly boosts the replayability.

Another thing that made this game’s story and gameplay a thrill ride was the music-infused into the world by Olivier Derivière. Dying Light is well known for its gameplay, but also its amazing musical scores and Mr. Derivière has made this game’s music nothing short of a masterpiece. Traveling through the game becomes very dramatic, I don’t feel I have heard such great gameplay impacted music score in some time.

With every step you take, the music will drastically change from a slow-paced tune to a dramatic movie-like tone. As you run atop the buildings in Villedor, the music carries you on a journey of its own and I applaud the team and Olivier for this stellar job on this soundtrack

Point A to Point B as Creatively as Possible

The combat in Dying Light 2 is highly improved from the last game. While I feel Dying Light had great combat, the sequel has a much smoother and more natural feel to its combat system. This might be the fact the game has the option of running at 60 fps now, but I feel like it is more than that.

As you traverse the world and gather more impactful weaponry, the damage and parkour gameplay actually feels like it’s making a difference as you level up our Skill Tree. For me, in the previous Dying Light, I felt like no matter what weapon or skill I had, I was always on the short end of the stick. This time around I feels like I actually have an upper hand against virals and enemies alike as I find more powerful weapons and become a more skilled fighter.

That is also the case with the parkour system, I have to admit I was terrible at parkour traversal in the first game. I could never make the right skill choices to better my parkour ability, but this time around I felt like a master shortly after upgrading my parkour skills and stamina. Upgrading your parkour skills though go hand in hand with the choices you make in this game, there are many ways of taking shortcuts or fast traveling through the map. I decided though to never take shortcuts and always go from Point A to Point B the most creative way I could. Doing this gained me massive parkour XP and helped me become a master overnight, literally. By doing most of my traversal at night I would also gain a nighttime XP boost that really helps you boost your skills faster!

Traveling through this game has been such a rush never felt more exhilarating. From scaling walls, grappling from midair jumps to buildings, riding ropes, gliding, and more made this gameplay aspect one of the game’s best features.

Over the years, many games have tried to incorporate Parkour systems in their gameplay. Games like Mirror’s Edge and Assassin’s Creed are some of the biggest, but no one takes the cake like Dying Light 2. The parkour traversal in this game is on an island of its own and I believe is by far the best parkour system I have ever had the chance of playing. Before moving on, I do want to quickly as how breathtaking this game really is. Dying Light 2 has a lot more to offer players than just graphical presentation, but holy hell man. AS I walked through the game It was really hard not to stop and just look at what Techland had built. Whether traveling on the ground or on the top of a building, this game has so many horrific, depressing, yet beautiful landscapes to look at you can get lost for hours just taking it all in.

EVEN WITH A CURE, WE ALL CAN STILL BE MONSTROUS

In this vast world, the challenges you face are not just won by the decisions you make but also by the enemies you have to face. In Dying Light 2 you will face off against multiple forms of Virals never before seen in Dying Light as well as new human enemies are thrown into the mix. While traveling the map during the day, you will face many human enemies, and depending on where they are you may have to fight off hordes of Virals in the process.

The addition of more human enemies really gave me a rush in the game. Walking through the world, there will be times you will have blue waypoint markers pop up that will indicate that certain allies or innocents are in trouble. Follow these waypoints and you can either help innocent bystanders be that have been taken hostage, or areas that are being rushed by factions like the Renegades.

This really made my blood rush, walking up and randomly hearing someone begging for help and having like seven enemies pop up out of nowhere really added to the danger this world presented and I loved it! Though the human enemies were somewhat challenging, the Virals this time around are much more of a challenge. Since I decided to mainly travel at night time for the XP bonus, I was met by a horde of Virals that wouldn’t go down without a fight. Most of you, of course, know the normal infected like Virals, Volatiles, Biters, Degenerates, and let’s not forget Goons.

These infected are always a challenge especially at night, but this time they have some friends by their side. There are multiple new enemies like the Revenant, Howler, Banshee, Drowner, Chargers, Bombers, and Bolter that will challenge you in ways like never before. Let a Howler see you? Well, they’re gonna scream and let all surrounding Virals that your there. Get tied up with a Revenant? They’ll spit out a mist that will make the surrounding virals more powerful.

Each one of these new enemies comes with its own challenges for you to take on and it makes the enemies of the game much more diverse in this sprawling world. Now that we have talked about the monstrous enemies you will face, there were a few monstrous issues I had while playing this game that I have to address. Dying Light 2 is near a perfect game, but with early access to these games, sometimes we will run into bugs. Though I had nothing to the point of game-breaking, I found myself having to restart the game multiple times due to inactive AI characters during cutscenes. Multiple times I would complete a mission and be met with an in-game cutscene that would have AI standing still but have another invisible version of themselves continuing their actions.

It was almost like the character would get separated from the actions they were programmed to do, continue to speak, but then have the actions they were meant to do continue as if they were doing it themselves. Though I did find this bug rather hysterical it eventually became somewhat irritating to deal with over and over again.

Lastly, I know that having early access comes with a few downfalls, but I really wish I could have played through the game in COOP. With the game not being out yet, the online servers were not up so there was no possible way for me to experience the game with any fellow reviews at the time of playing it.

Does ‘The Batman’ Have an End Credits Scene?

Pistol Season 1 Launch Date and Time, Countdown, When Is It Coming Out?

Does ‘The Batman’ Have an End Credits Scene?

Pistol Season 1 Launch Date and Time, Countdown, When Is It Coming Out?

The Time Traveler’s Spouse Season 1 Episode 3 Launch Date and Time, Countdown, When Is It Coming Out?

The Time Traveler’s Spouse Season 1 Episode 2 Launch Date and Time, Countdown, When Is It Coming Out?