Circle Chart (formerly known as Gaon Chart) has revealed its chart rankings for the week of October 23 to 29!

This week’s Circle album chart is almost entirely full of new releases, starting with BTS’s Jin’s new solo single “The Astronaut” coming in at No. 1!

Stray Kids’ “MAXIDENT” climbed up six spots to take the No. 2 spot while MONSTA X’s Kihyun’s new solo mini album “YOUTH” entered the chart at No. 3.

Additional new entries at No. 4 and No. 5 included EPEX’s “Puppy Love” and ATBO’s “The Beginning: 始作.” 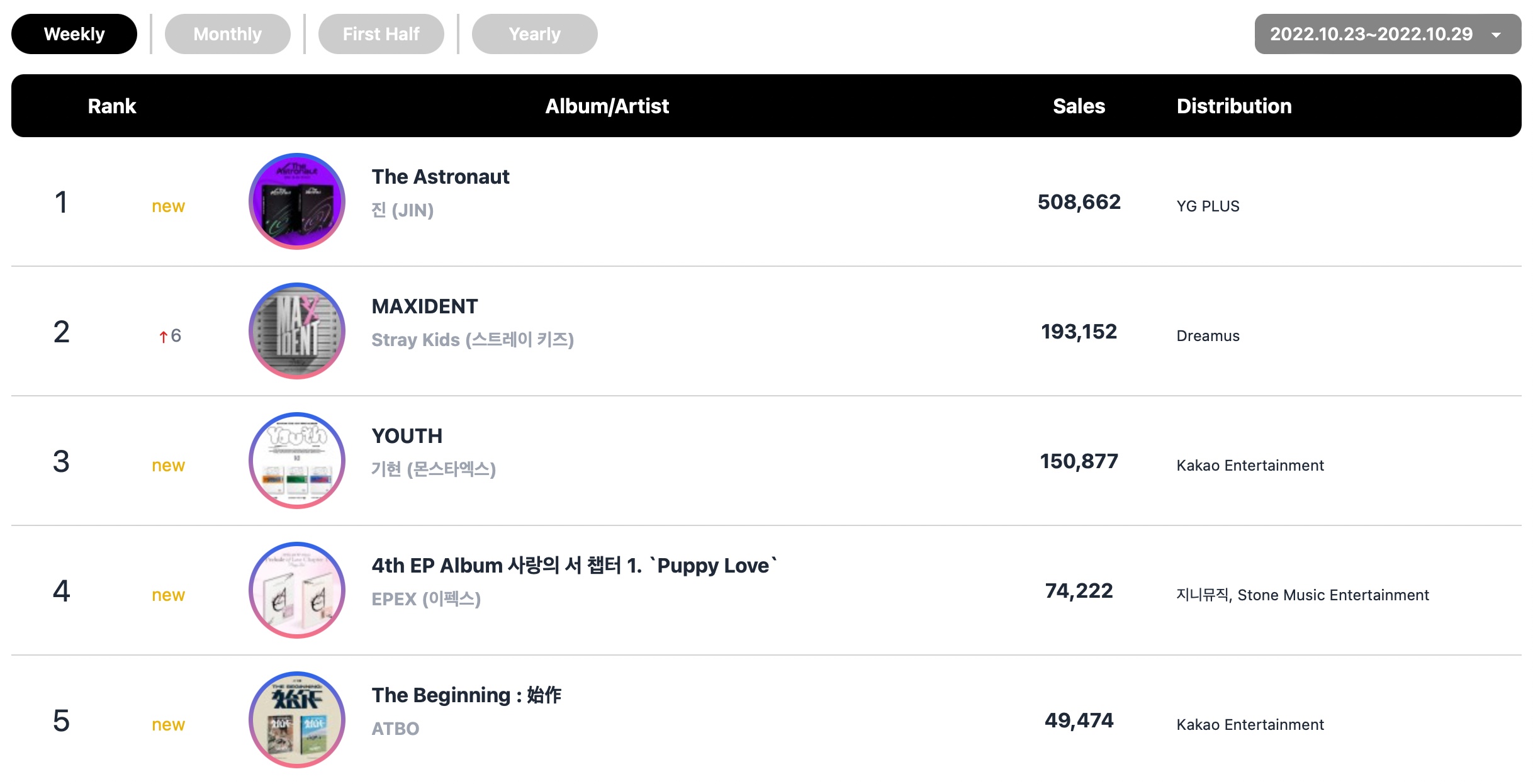 (G)I-DLE has scored an incredible quadruple crown on this week’s charts!

Staying strong from their chart debut at No. 1 last week, (G)I-DLE’s latest title track “Nxde” has topped the download chart once again. They are trailed by the chart debuts of “The Astronaut” by BTS’s Jin and “Youth” by MONSTA X’s Kihyun.

Kim Ho Joong has occupied the next two spots with his songs “meet you among them” and “My Voice,” which both jumped three places this week. 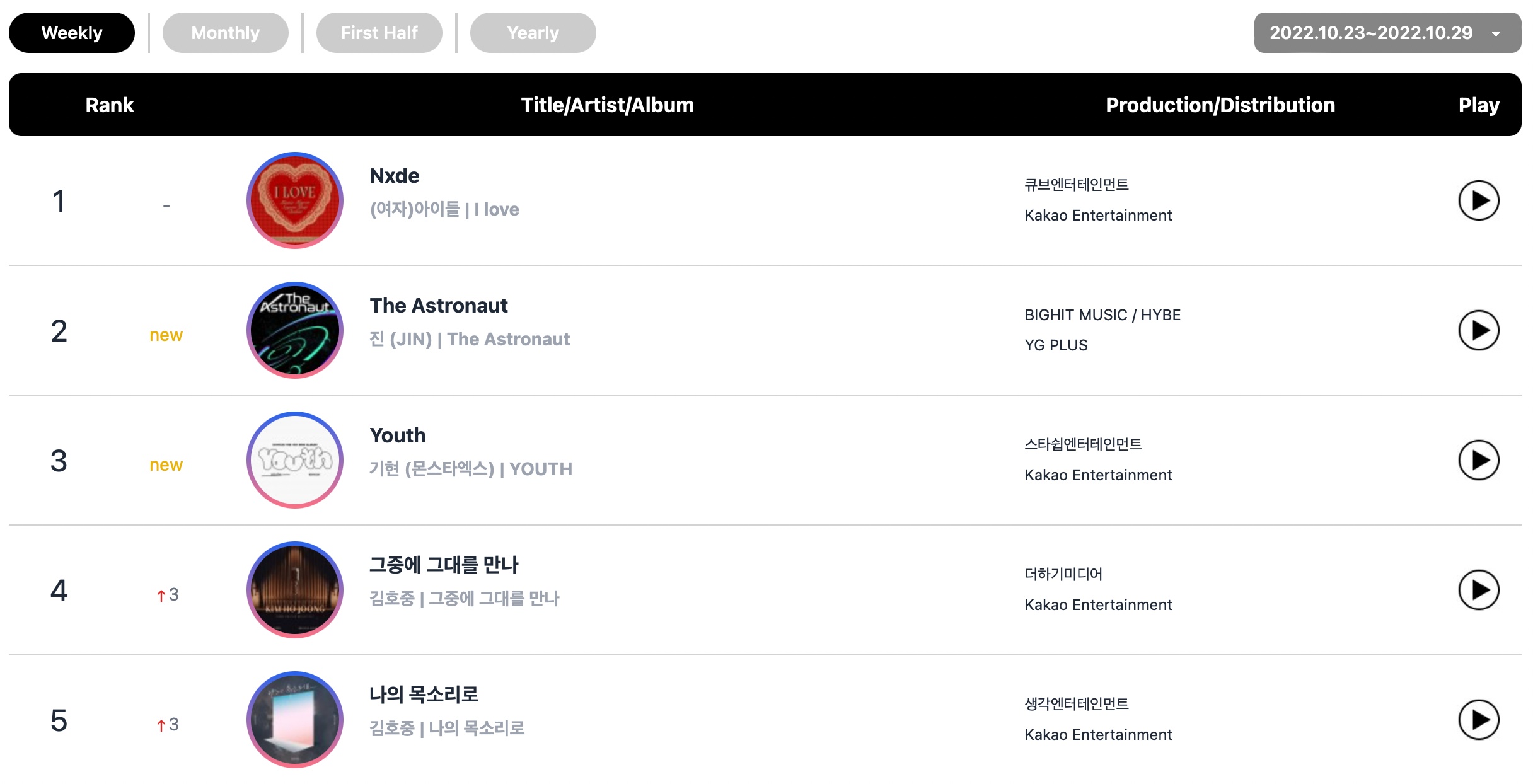 In third is LE SSERAFIM’s new song “ANTIFRAGILE” which has climbed five places, while IVE’s “After LIKE” is ranked at No. 4. Younha’s “Event Horizon” has moved up eight places to land in No. 5. 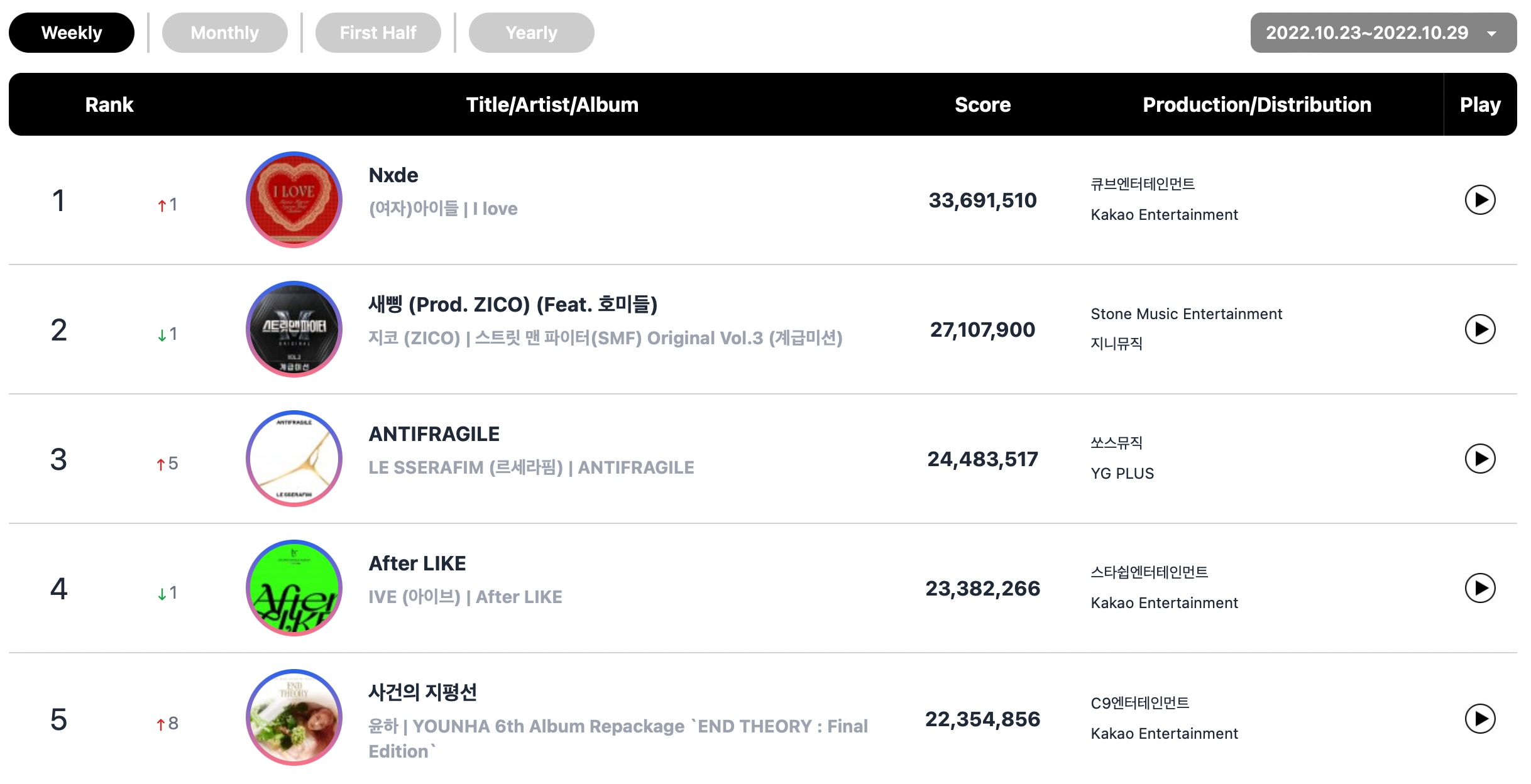 Jumping from No. 4 to No. 1, “Nxde” by (G)I-DLE topped this week’s streaming chart. “New thing” by Zico placed in second, followed by “After LIKE” by IVE.

The No. 4 spot went to “ANTIFRAGILE” by LE SSERAFIM, jumping eight spots, and “Hype Boy” by NewJeans dropped two places to No. 5. 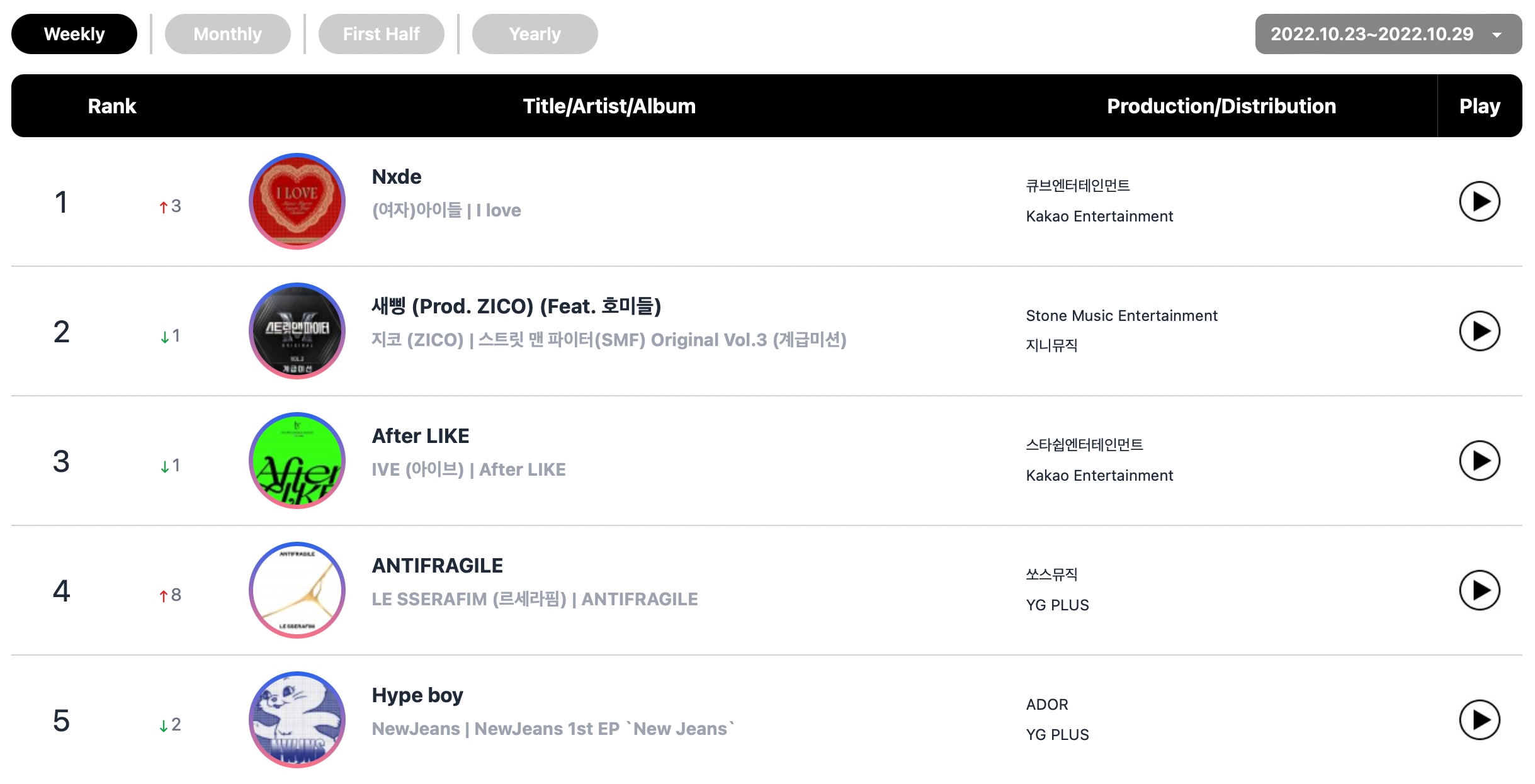 (G)I-DLE’s “Nxde” earned its fourth and final No. 1 ranking on this week’s global K-pop chart after climbing three ranks.

LE SSERAFIM’s “ANTIFRAGILE” remained steady at No. 2, trailed by “Shut Down” and “Pink Venom” by BLACKPINK. Maintaining its No. 5 spot was “Hype Boy” by NewJeans. 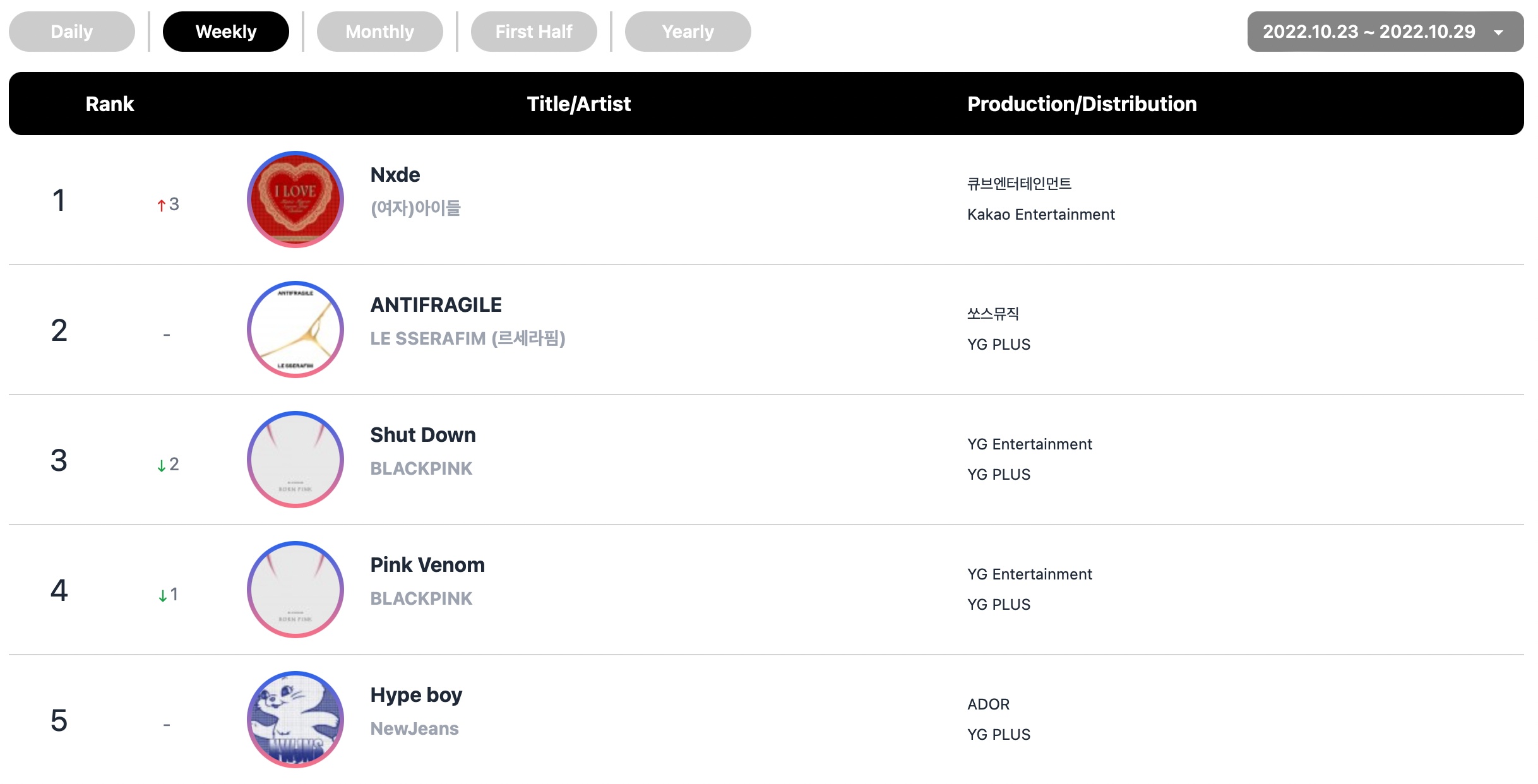 On this week’s social chart, BLACKPINK and BTS held on to their top two spots. 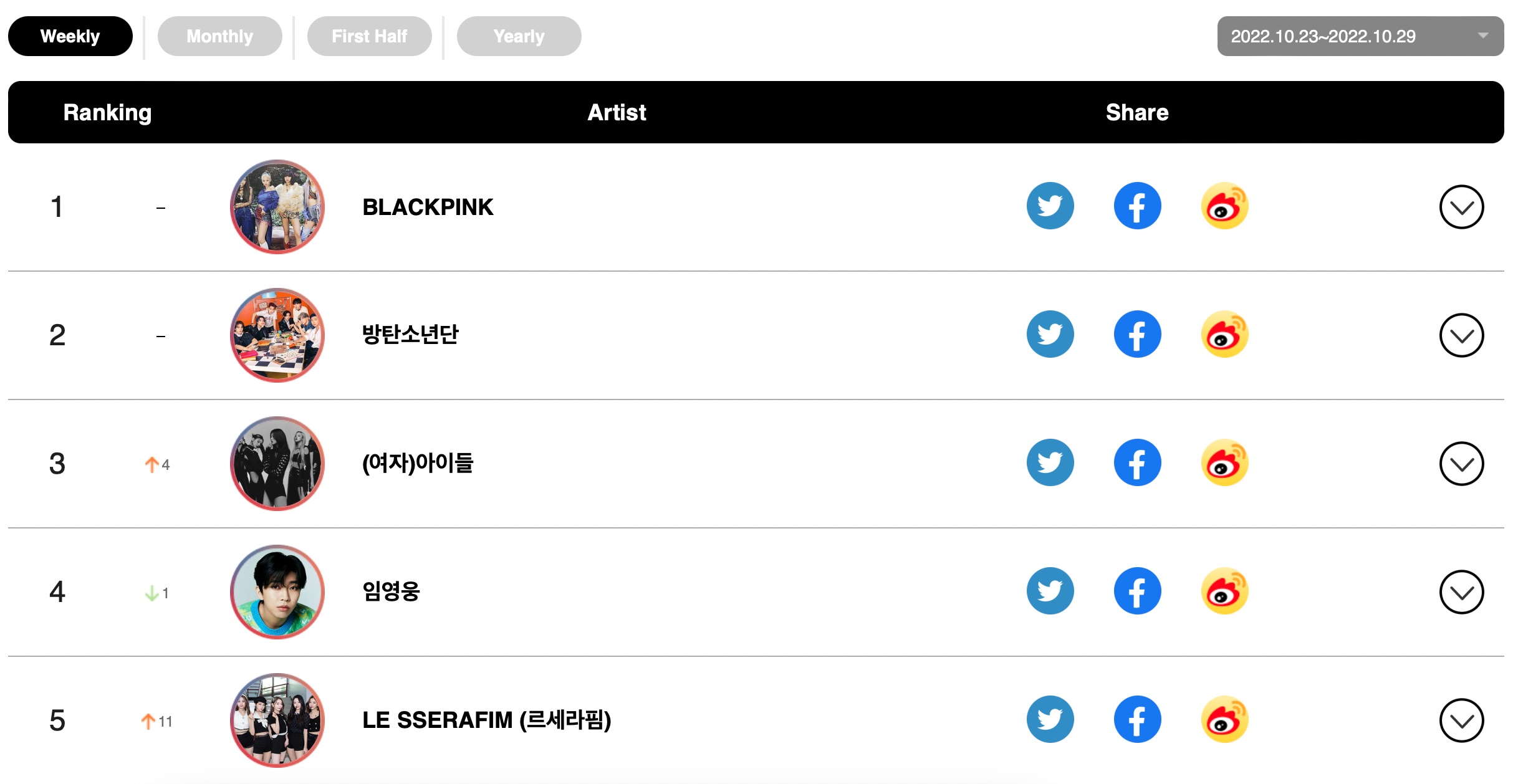 Congratulations to all the artists!