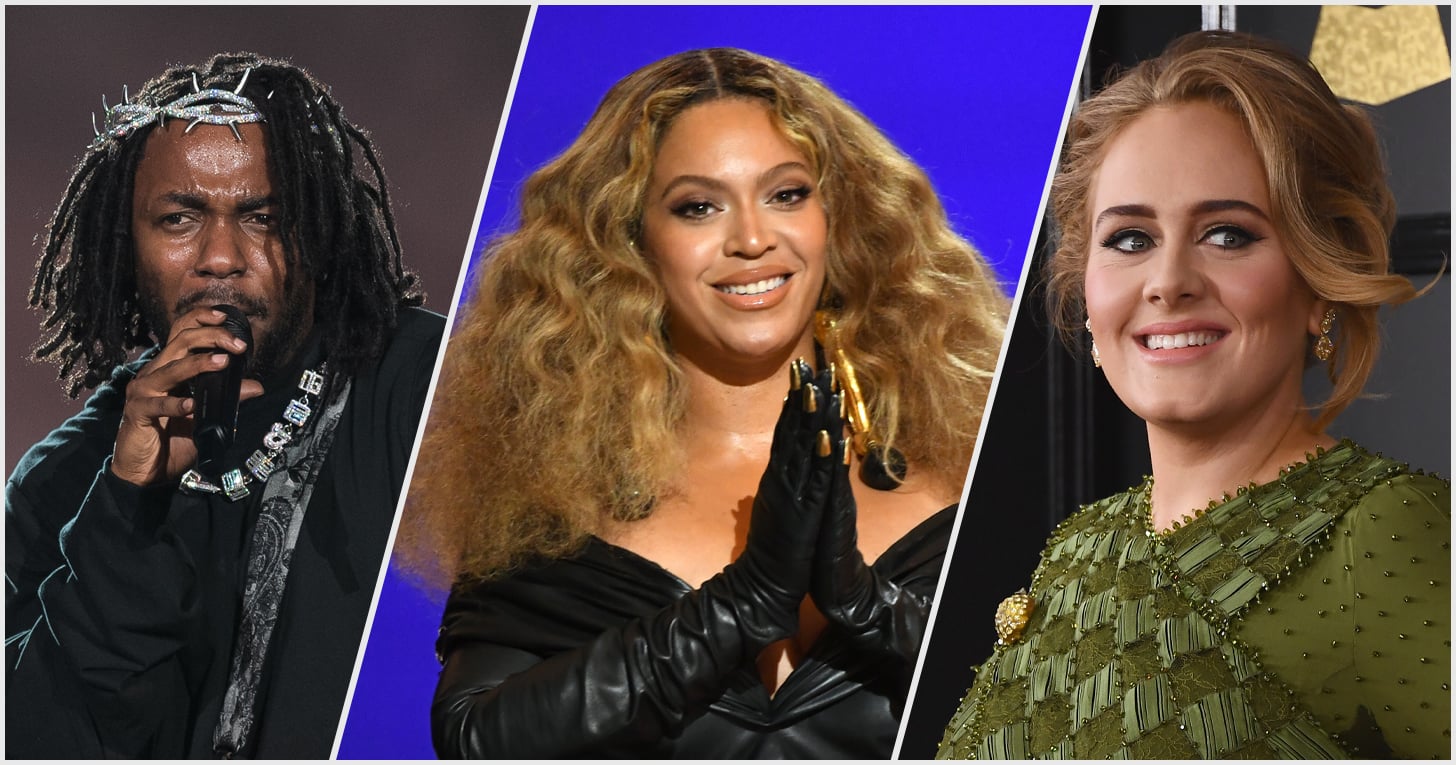 The highly anticipated list of 2023 Grammy nominees has finally arrived, and it’s stacked with some heavy-hitting artists. On Nov. 15, the Recording Academy revealed nominations across all 91 categories this year, some of which were presented by past Grammy winners like Olivia Rodrigo, John Legend, as well as Machine Gun Kelly.

Leading this year’s pack of nominees is Beyoncé with nine total nominations for her “Renaissance” album — making her the most nominated woman in Grammys history. Following behind her is Kendrick Lamar’s “Mr. Morale and the Big Steppers” album with eight noms, and Adele and Brandi Carlile tied for seven overall nominations. Other big names among the Grammy nominee pool are Taylor Swift, Harry Styles, Doja Cat, Jazmine Sullivan, Mary J. Blige, and Bad Bunny — who made history for having the first all-Spanish language project nominated for album of the year.

Some notable acts who didn’t receive nominations this year include Silk Sonic and The Weeknd — both of whom didn’t submit their music for consideration. Nicki Minaj, who was also snubbed from the 2023 nominations, previously called out the institution for recategorizing her “Super Freaky Girl” single as a pop song instead of a rap track.

Music’s biggest night of the year will take place in Los Angeles on Feb. 5, 2023, and air on CBS and Paramount+. A host has yet to been announced, though Trevor Noah led the last two shows in 2021 and 2022. Read ahead for the complete list of 2023 Grammy nominees.

Record of the Year

“Don’t Shut Me Down” by ABBA
“Easy on Me” by Adele
“Break My Soul” by Beyoncé
“You and Me on the Rock” by Brandi Carlile feat. Lucius
“Woman” by Doja Cat
“As It Was” by Harry Styles
“The Heart Part 5” by Kendrick Lamar
“About Damn Time” by Lizzo
“Good Morning Gorgeous” by Mary J. Blige
“Bad Habit” by Steve Lacy

Album of the Year

Song of the Year

“Easy on Me” by Adele
“Break My Soul” by Beyoncé
“Just Like That” by Bonnie Raitt
“God Did” by DJ Khaled feat. Rick Ross, Lil Wayne, Jay-Z, John Legend & Fridayy
“ABCDEFU” by Gayle
“As It Was” by Harry Styles
“The Heart Part 5” by Kendrick Lamar
“About Damn Time” by Lizzo
“Bad Habit” by Steve Lacy
“All Too Well (10 Minute Version) (The Short Film)” by Taylor Swift

“Don’t Shut Me Down” by ABBA
“Bam Bam” by Camila Cabello feat. Ed Sheeran
“My Universe” by Coldplay & BTS
“I Like You (A Happier Song)” by Post Malone & Doja Cat
“Unholy” by Sam Smith & Kim Petras

“Call Me Little Sunshine” by Ghost
“We’ll Be Back” by Megadeth
“Kill or Be Killed” by Muse
“Degradation Rules” by Ozzy Osbourne feat. Tony Iommi
“Blackout” by Turnstile

“There’d Better Be a Mirrorball” by Arctic Monkeys
“Certainty” by Big Thief
“King” by Florence and the Machine
“Chaise Lounge” by Wet Leg
“Spitting Off the Edge of the World” by Yeah Yeah Yeahs feat. Perfume Genius

“Virgo’s Groove” by Beyoncé
“Hurt Me So Good” by Jazmine Sullivan
“Over” by Lucky Daye
“Here With Me” by Mary J. Blige feat. Anderson .Paak
“Hrs & Hrs” by Muni Long

“Cuff It” by Beyoncé
“Hurt Me So Good” by Jazmine Sullivan
“Good Morning Gorgeous” by Mary J. Blige
“Hrs & Hrs” by Muni Long
“Please Don’t Walk Away” by PJ Morton

“God Did” by DJ Khaled
“I Never Liked You” by Future
“Come Home the Kids Miss You” by Jack Harlow
“Mr. Morale & The Big Steppers” by Kendrick Lamar
“It’s Almost Dry” by Pusha T

“The Passenger” by Cheryl B. Engelhardt
“Mantra Americana” by Madi Das, Dave Stringer & Bhakti Without Borders
“White Sun” by Mystic Mirror
“Joy” by Paul Avgerinos
“Positano Songs” by Will Ackerman

“The Evening: Live at Apparatus” by The Baylor Project
“Fade to Black” by Carmen Lundy
“Ghost Song” by Cécile McLorin Salvant
“Fifty” by The Manhattan Transfer & The WDR Funkhausorchester
“Linger Awhile” by Samara Joy

“Bright Star” by Anaïs Mitchell
“Prodigal Daughter” by Aoife O’Donovan & Allison Russell
“Just Like That” by Bonnie Raitt
“You and Me on the Rock” by Brandi Carlile feat. Lucius
“High and Lonesome” by Robert Plant & Alison Krauss
“Forever” by Sheryl Crow

“Just Like That…” by Bonnie Raitt
“In These Silent Days” by Brandi Carlile
“Things Happen That Way” by Dr. John
“Good to Be…” by Keb’ Mo’
“Raise the Roof” by Robert Plant & Alison Krauss

“There You Go Again” by Asleep at the Wheel feat. Lyle Lovett
“The Message” by Blind Boys of Alabama feat. Black Violin
“Made Up Mind” by Bonnie Raitt
“You and Me on the Rock” by Brandi Carlile feat. Lucius
“Silver Moon [A Tribute to Michael Nesmith]” by Eric Alexandrakis

“The Movement” by Alphabet Rockers
“Ready Set Go!” by Divinity Roxx
“Space Cadet” by Justin Roberts
“Los Fabulosos” by Lucky Diaz and the Family Jam Band
“Into the Little Blue House” by Wendy and DB

“Call Us What We Carry: Poems” by Amanda Gorman
“You Will Be Someone’s Ancestor. Act Accordingly.” by Amir Sulaiman
“Black Men Are Precious” by Ethelbert Miller
“The Poet Who Sat By the Door” by J. Ivy
“Hiding in Plain View” by Malcolm-Jamal Warner

“The Closer” by Dave Chappelle
“Comedy Monster” by Jim Gaffigan
“Sorry” by Louis C.K.
“We All Scream” by Patton Oswalt
“A Little Brains, a Little Talent” by Randy Rainbow

“Adele One Night Only” by Adele
“Billie Eilish Live at the O2” by Billie Eilish
“Our World” by Justin Bieber
“A Band a Brotherhood a Barn” by Neil Young & Crazy Horse
“Motomami (Rosalía TikTok Live Performance)” by Rosalía
“Jazz Fest: A New Orleans Story” by Various Artists

“Easy on Me” by Adele
“Yet to Come” by BTS
“Woman” by Doja Cat
“As It Was” by Harry Styles
“The Heart Part 5” by Kendrick Lamar
“All Too Well: The Short Film” by Taylor Swift

Best Score Soundtrack For Video Game and Other Interactive Media

Best Arrangement, Instrumental, or a Cappella

“Black Pumas (Collector’s Edition Box Set)” by Black Pumas
“Big Mess” by Danny Elfman
“In and Out of the Garden: Madison Square Garden ’81, ’82, ’83” by The Grateful Dead
“Book” by They Might Be Giants
“Artists Inspired by Music: Interscope Reimagined” by Various Artists

“Against the Odds: 1974 – 1982” by Blondie
“Life’s Work: A Retrospective” by Doc Watson
“To Whom It May Concern…” by Freestyle Fellowship
“The Goldberg Variations: The Complete Unreleased 1981 Studio Sessions” by Glenn Gould
“Yankee Hotel Foxtrot (20th Anniversary Super Deluxe Edition)” by Wilco

Producer of the Year, Non-Classical

Songwriter Of The Year, Non-Classical

Producer of the Year, Classical

“Bach: The Art of Life” by Daniil Trifonov
“Abels: Isolation Variation” by Hilary Hahn
“A Night in Upper Town – The Music of Zoran Krajacic” by Mak Grgić
“Beethoven: Diabelli Variations” by Mitsuko Uchida
“Letters For the Future” by Time for Three, The Philadelphia Orchestra & Xian Zhang