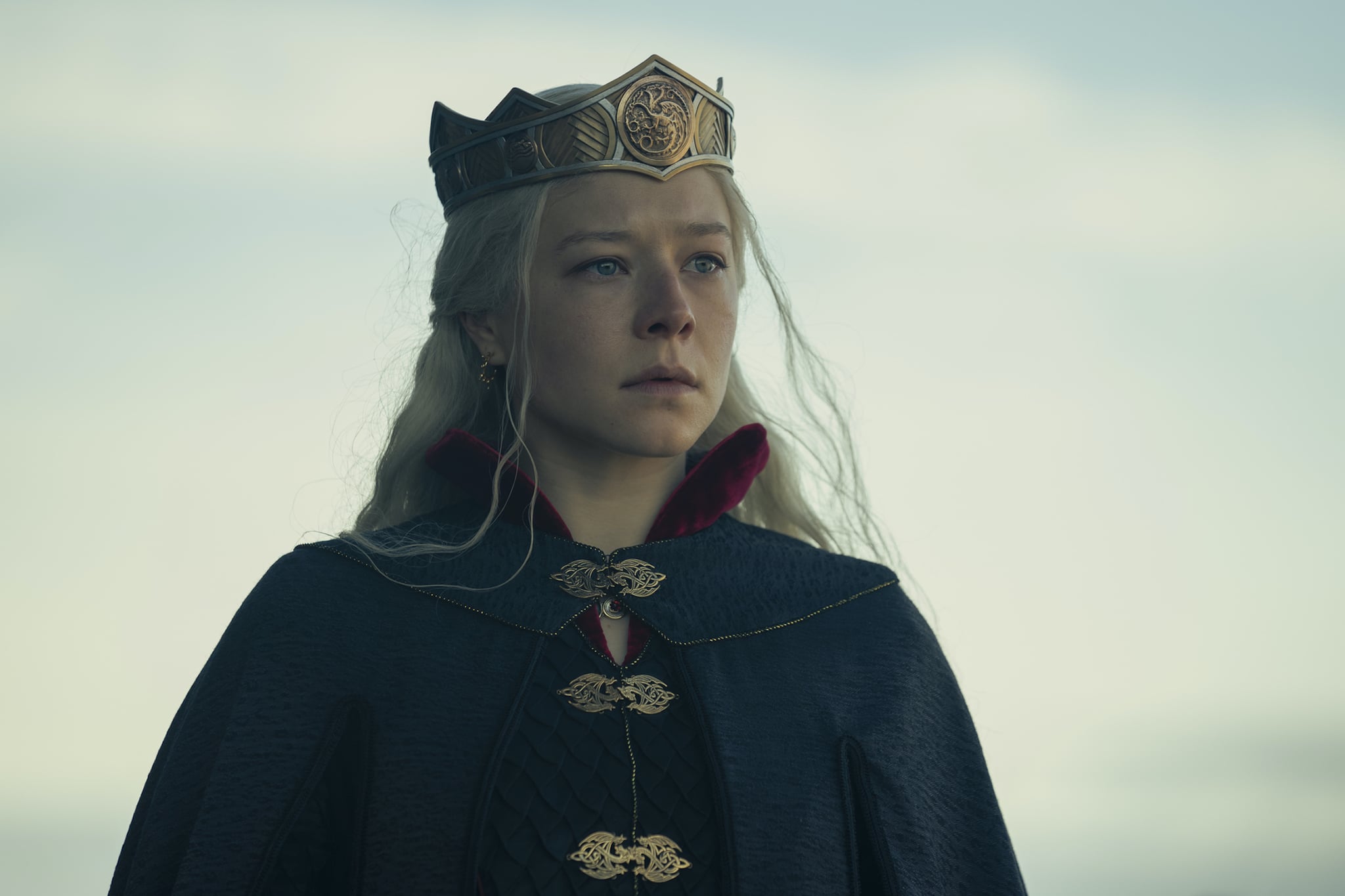 “House of the Dragon” spends most of its first season building up to one flashpoint: the dueling claims of Rhaenyra Targaryen and Aegon Targaryen for the Iron Throne. By the end of the season, both half-siblings have been formally crowned by their own factions, and the physical crowns they use seem to carry a lot of symbolism for their respective places in history.

What Is the Meaning of Rhaenyra’s Crown?

“House of the Dragon” viewers will immediately recognize the very distinctive crown that Daemon uses to crown Rhaenyra. It is the same crown worn by her father, the late King Viserys I, smuggled out of King’s Landing after the king’s death and brought to Rhaenyra by Ser Erryk Cargill. The geometric, two-tone crown features the House Targaryen sigil front and center, and other, smaller symbols around its sides.

The symbolism here is fairly clear: crowning Rhaenyra with Viserys’s crown emphasizes that she (not her half-brother Aegon) was Viserys’s chosen heir. This crown also ties back into the history of the Targaryen family. Previously, it was worn by her great-grandfather Jaehaerys I, known as “the Wise” and “the Conciliator,” who ascended to the Iron Throne after the mysterious death of his uncle, Maegor I, known as a cruel king and a usurper to the throne. Also worth remembering in this context: Jaehaerys was succeeded by his grandson Viserys (Rhaenyra’s father), passing over the claim of Princess Rhaenys.

Rhaenyra wearing this particular crown can be seen as both a nod at the circumstances of Jaehaerys’s rule (a “good” and “true” king contrasted with a cruel usurper) and at the parallels between her story and Rhaenys’s.

What Is the Meaning of Aegon’s Crown? 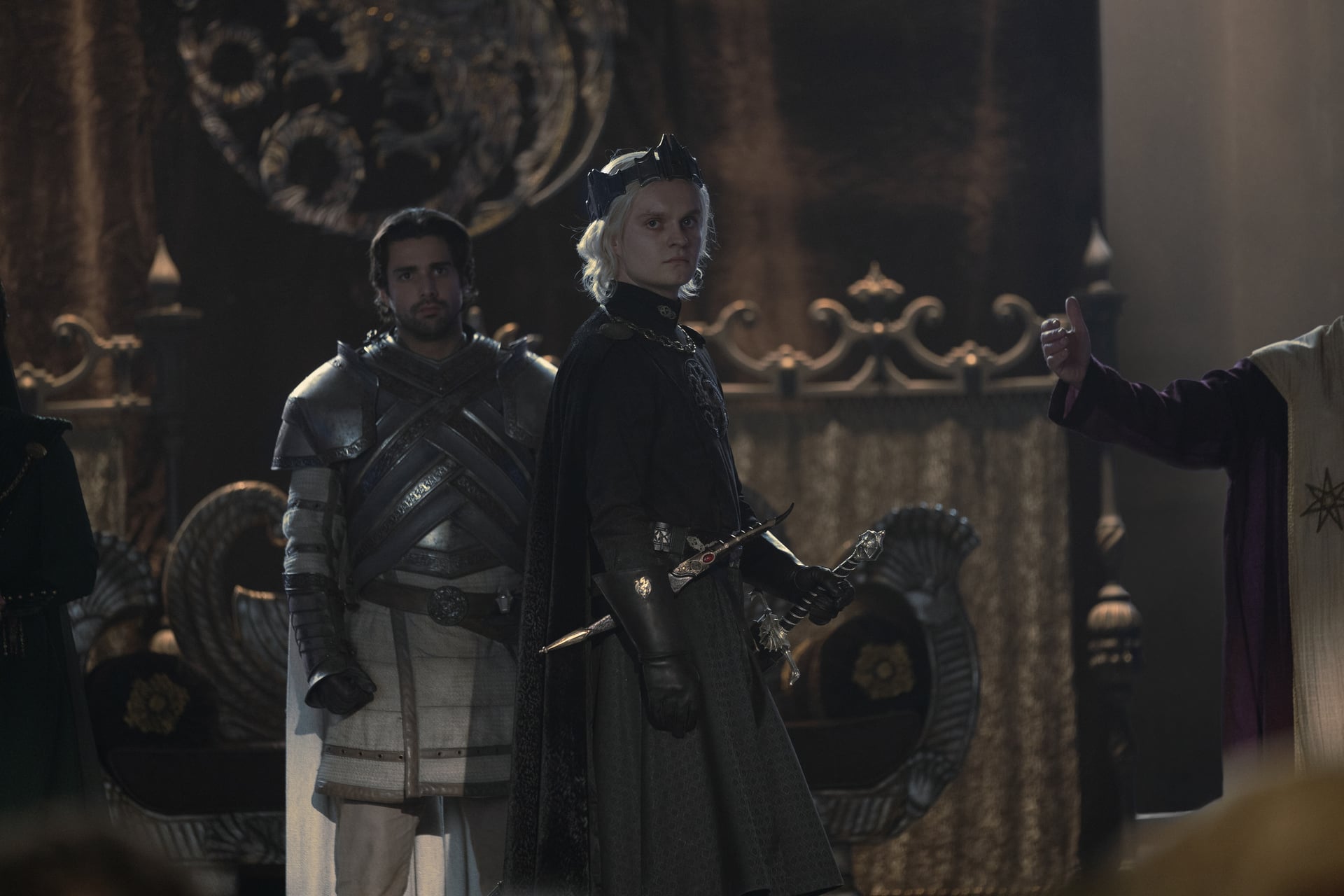 When the Hightower faction hastily crowns Aegon II immediately after the death of Viserys, they know that it will be a controversial move. In hopes of establishing him as the “true” heir to his father’s throne, they use symbols of Targaryen rule — in particular, the crown of Aegon I, aka Aegon the Conqueror, who established Targaryen rule in Westeros.

The angular black crown, with a single red stone in the center, almost resembles the outline of a fortress, rather than a more “typical” crown shape. Originally worn by Aegon the Conqueror, its most recent wearer was Maegor I, also called Maegor the Cruel. This black crown seems to be more connected to kings who rule over eras of violence, in contrast with the more peace-focused reigns of the gold crown’s wearers.

It’s clear that Aegon’s supporters want the symbolism of his namesake, the founder of their house, to evoke the idea of him being the “next” Aegon, but it’s hard to ignore the parallels between Maegor’s penchant for cruelty and the cruelty already on display by Aegon II. With these two contrasting crowns on the heads of two contrasting would-be rulers, the stage is set for a second season full of scheming and power plays to determine whose reign will live on in history.

Get to Know the Actors Who Play the Young Sanderson Sisters

Get to Know the Actors Who Play the Young Sanderson Sisters