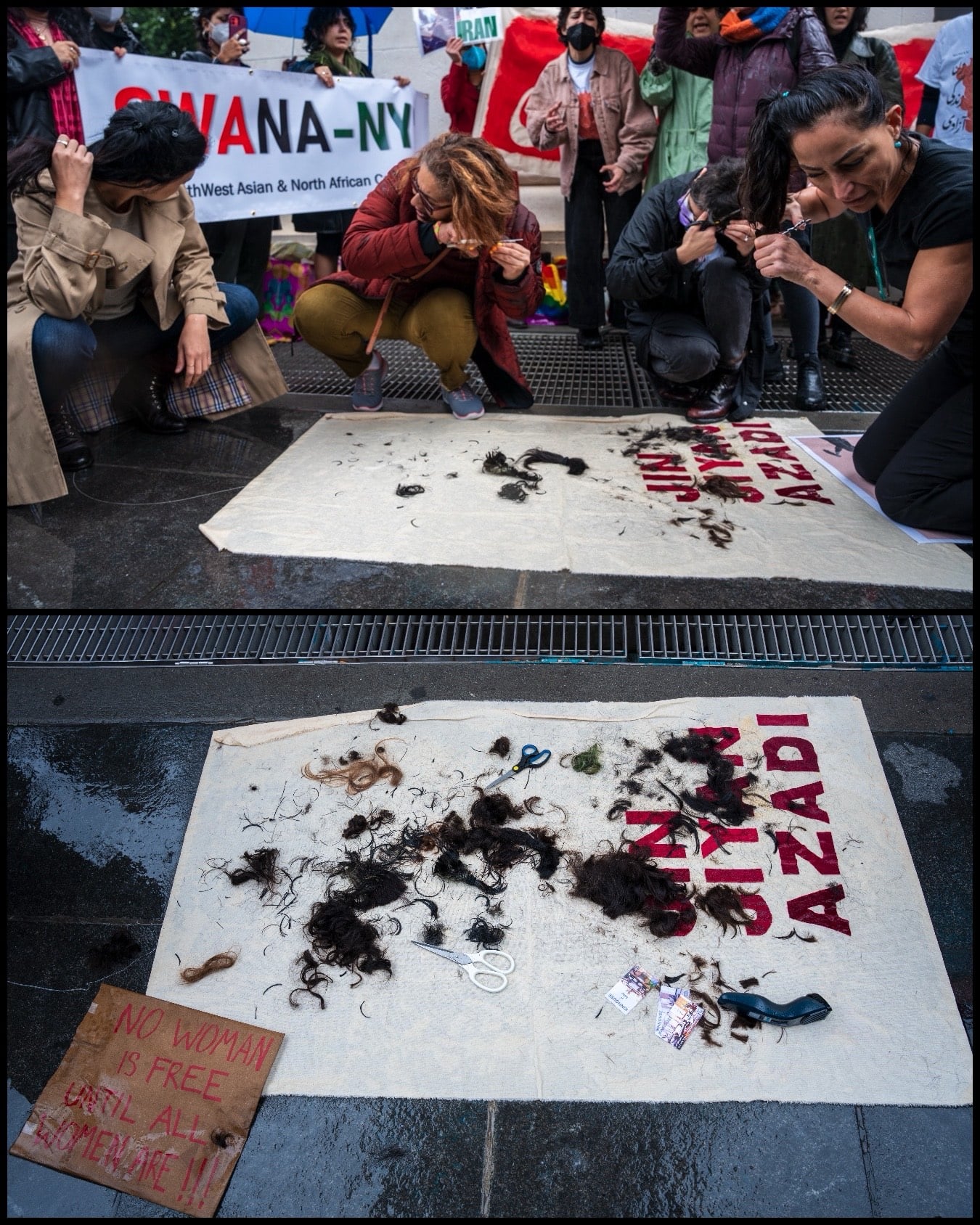 It’s mid-September and I am standing at the stove, stirring a pot of mint syrup, while my mom gives me cooking directions over FaceTime. Today is Mehregan, an ancient Zoroastrian festival celebrating autumn, and my goal is to take homemade Sharbat-e Sekanjabin to a potluck at my friend’s apartment. I have never made the flavorful drink on my own, so I want to be sure that it’s perfect.

The night before, Zhina Mahsa Amini, a 22-year-old Kurdish woman from Saqqez, died while in custody of Iran’s so-called “morality police.” She was in Tehran visiting with family when she was arrested for allegedly wearing her hijab incorrectly; the government claims she had a heart attack, but eyewitnesses said she was beaten to death at a detention center before being suspiciously rushed to the hospital.

My mom and I are talking about the devastating news when she discloses something I’d never heard before. “I was held at the same detention center. It could have been me,” she starts. I can see a storm in her eyes. The mint syrup looks like it’s ready, but I don’t want to interrupt her story to ask.

So I burn it. I burn the sekanjabin syrup and keep stirring while she tells me about the hidden cells at the bottom of the Vozara Detention Center.

In this moment, I just want to make her feel heard.

My mom is one of many women who lived through the 1979 Iranian Revolution, watching her home descend into a land of surveillance and policing in every sense of the word. Although Amini’s death led to global protests on a larger scale than ever before, hers is unfortunately not a new story. Morality and religious police forces have existed since the establishment of the Islamic Republic government and dictate that all women in Iran, regardless of their religion, must wear hijab and manteau (an overcoat) or risk arrest, detention, and possibly much worse.

Before 1979, women were not required by law to wear hijab and manteau; it is not woven into the fabric of our culture the way some Westerners assume. My mom’s adolescence is full of stories like the one she told me about the detention center. She was arrested as a university student for protesting and escaped by giving a fake name; sustained injuries from violence breaking out at protests; and fled Iran after her apartment was exposed as a meeting place for organizers in the early 1980s. All the while, she watched as her basic freedoms were stripped away by an oppressive regime.

In a place where just letting your hair blow in the wind is a crime, help raise the voices calling for women’s bodily autonomy and freedom.

Iran wasn’t always like this. And before anything else, I think all Americans should understand how the United States and Britain are partly responsible for Iran’s descent into authoritarianism.

About 70 years ago, Iran was close to being economically healthy in part thanks to its popular prime minister Mohammad Mosaddegh, who tried to nationalize the country’s oil — an asset that had been owned by the British on Persian land since the early 1900s. But as Western powers usually do when their control is threatened, the US and the UK orchestrated a coup d’etat in 1953 that overthrew Mosaddegh and formally reinstated monarchical rule. More than two decades later, the Iranian Revolution — a rejection of the Shah whom the United States supported — led to the establishment of the Islamic Republic.

Today, many voices are calling for Western intervention in Iran. But I urge you to remember the destruction that the West has caused by interfering already.

So, how can you help?

One of the most vital parts of this movement is virtual activism. Here in America, you might think that posting on social media accomplishes nothing. But I deeply urge you to challenge this in the context of Iran, where the government controls the internet — in large part because they don’t want the world to see how inhumanely they treat their own people.

To show our explicit support for protesters in Iran, we can’t just raise awareness when big news breaks; we have to keep consistently sharing information. It has been gratifying to see the recent massive participation at protests around the world, many of which have been organized through social media. But the people of Iran, including children, continue to risk their lives for basic freedoms that we take for granted. Human rights groups estimate that more than 200 people have been killed in the country since the protests began in September, and women who speak out continue to be at risk.

I promise that every Facebook post, Instagram Story, and tweet with the movement’s hashtags amplifies Iranian voices. Please keep using your platform to share. When posting, use the hashtags #JinaAmini, #MahsaAmini, #ZhinaAmini, #JinJiyanAzadi, #ZanZendegiAzadi, #WomanLifeFreedom, #IranProtests, and #IranRevolution. There are also myriad accounts to follow for information and coordinated action, including @middleeastmatters, @localbrownbaby, @collectiveforblackiranians, @from____iran, and so many more. But be wary of organizations and individuals asking for donations. Because of sanctions imposed by the US, there are no financial channels for getting funds directly to those on the ground in Iran, so entities or individuals actively soliciting donations are often scams.

It’s paramount to remember that this movement is being led by Iranian people demanding the abolition of the Islamic regime. It’s not just about reforms like ending the morality police and mandatory hijab, so be careful of any content that distills the uprisings down to just a few ideas. The people of Iran have made it clear that this is about regime change more than anything, so heed their calls to action.

Uplift Kurdish women, who are at the epicenter of this movement not just in the current moment, but historically as well. Farsi chants of “zan, zendegi, azadi” — or “women, life, freedom” — reverberate around the world. But we cannot forget its origin: “jin, jîyan, azadî,” as coined by Kurdish militant feminist movements in response to persecution from Iran and other countries in the region, and popularized by Abdullah Öcalan in his anti-imperialist and anti-capitalist writings.

What’s more, Zhina Amini’s name is important precisely because it is Kurdish. The Islamic regime has banned Kurdish names, forcing families to register their children with non-Kurdish names such as Mahsa, which is a more traditional Persian name. Most actions across the globe are failing to acknowledge this; do not erase Zhina Amini, and Kurdish people more generally and their stake in this fight. Minorities, including the Kurdish and Baloch people, are being massacred in the cities of Zahedan and Sanandaj. It is our duty to keep sharing their stories and messages.

Understand, too, that we can’t downplay 43 years of mandatory hijab and the oppression that Iranian women have had to endure. I know that white feminists are feeling anxious about voicing support against compulsory hijab, fearing that it might appear Islamophobic. But there is a difference between a self-centered fear of being perceived as ignorant and the real, tangible fear women in Iran feel in their everyday life. In a place where just letting your hair blow in the wind is a crime, help raise the voices calling for women’s bodily autonomy and freedom. Be outspoken about it, too. 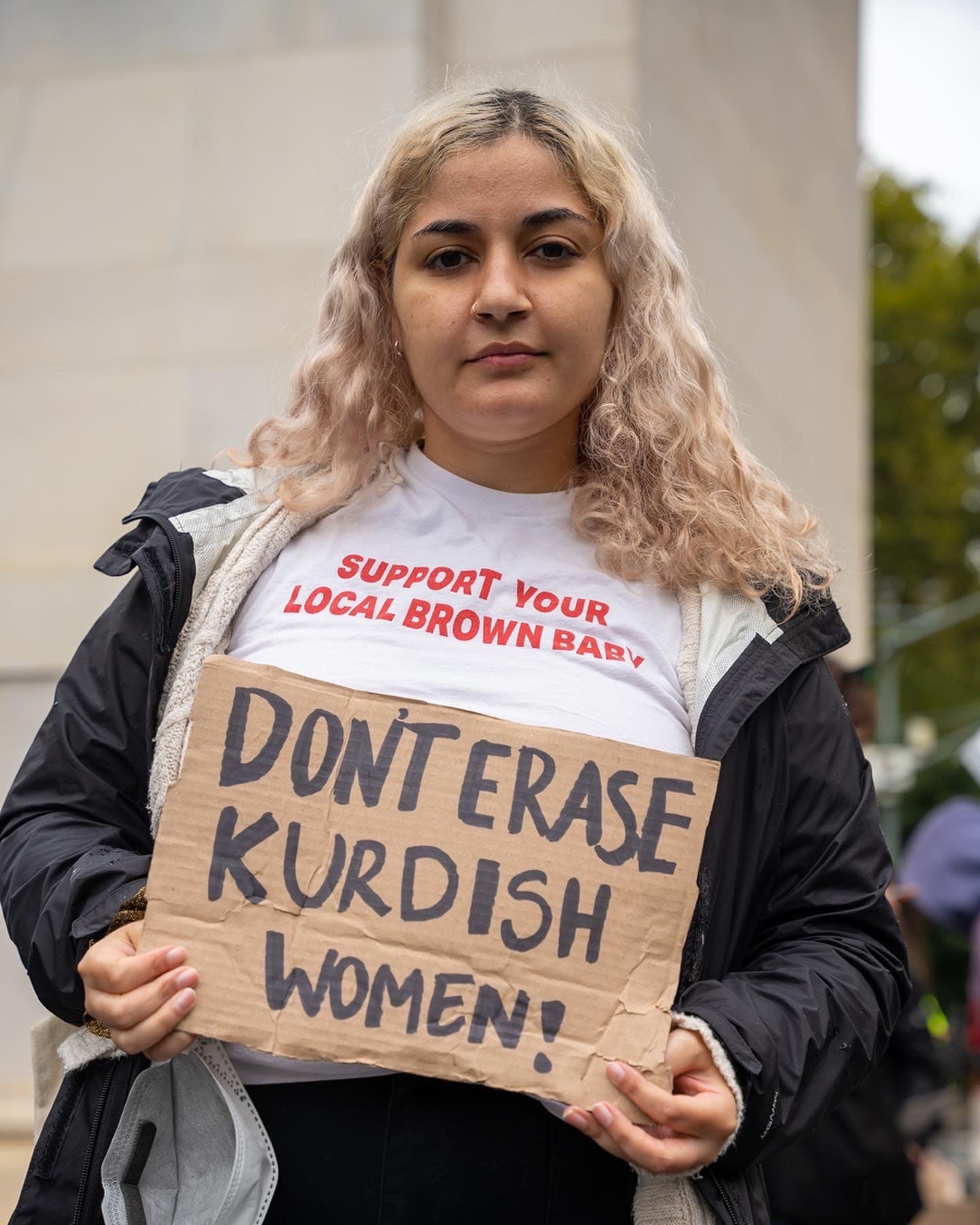 The writer, Negar Esfandiari, is photographed at a protest in New York City on Oct. 2. Image Source: Emma Giuliani

And finally, take time to learn what Iranian culture really means. It is hiking the sprawling Alborz mountains that hug the city of Tehran; taking in the smell of spring air before Nowruz celebrations; singing with your friends in the street and dancing freely to the popular artist Googoosh until your feet hurt. It is the words of famous female Persian poet Forugh Farrokhzad: “I will greet the sun again.”

Iranian culture is about always finding the light: in the end, my mom and I laugh about the burned syrup and how it congeals into a sticky candy-like texture. I consider starting another batch, but my mom says, “Just add water and see how it turns out,” so I do, and it actually works. The drink is sweet but refreshing, and it tastes even better because we made it together, despite the thousands of miles between us.

“Now you know how to make candy, too,” she says, and there is something magical about that. In the midst of the harsh burn of intergenerational trauma, forced hijab, and life-threatening rebellion, women are coming together to create something sweet: hope.

Negar Esfandiari is an Iranian American organizer from Oakland, CA, currently based in Brooklyn, NY. Her family is originally from Tehran.