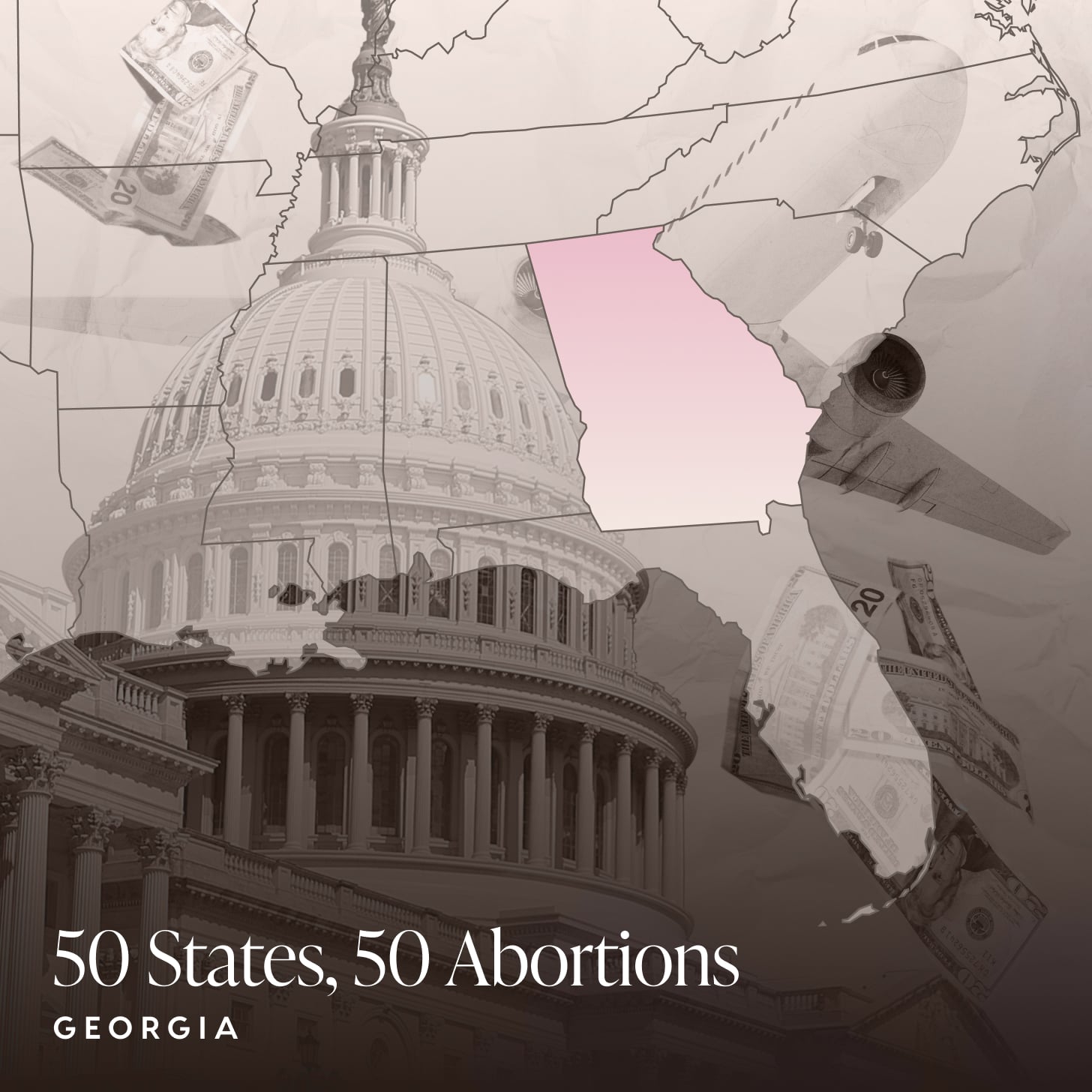 I was 30. My husband and I had been trying to have a baby for, like, three months. When it was finally time to try and take a test again, it was positive, and we were very, very excited.

When we were about 12 weeks along, we had a doctor’s appointment. I had questions like, can I eat this? Can I sleep on my stomach? You know, new parents. Our midwife came in and she said, “We need to talk to you about something. Your baby has an increased nuchal fold at the back of their neck, which is a marker for Down syndrome, so we’re gonna refer you to maternal fetal medicine. But most people in your situation just terminate the pregnancy.” She asked us if we had any questions; we were devastated. We left our appointment and cried — a lot.

We went to the maternal fetal medicine appointment, and all three doctors that we saw, because we asked for multiple opinions, told us to terminate. They performed a chorionic villus sampling, which is called a CVS procedure, where they take cells from the placenta to see if this baby just has a marker for this or if it’s a definitive diagnosis, and it showed that we’d received the correct diagnosis: Down syndrome.

We spoke to a genetic counselor, who made us talk about every crazy disease both of our families had ever had. She only said one positive thing about Down syndrome: that our kid would maybe be happier. But she said they would probably only live to 60, they would likely develop Alzheimer’s, they’d probably have a heart problem. That they would have mental handicaps, but there was no way of knowing if it would be not that bad or really bad. I had no idea that people with Down syndrome have a higher chance of getting childhood leukemia, which she told us too. Basically, she told us nothing happy. It’s then that we learned that our baby had an increased amount of fluid around them, and that it was likely that if it kept increasing, it would kill them. There was no way to know if it was going to happen. I never asked how they would die: if they would drown or be squished. I didn’t want to know.

All three doctors that we saw suggested that we get an abortion, and no one said anything positive, which was great. My husband and I went back and forth about what we were going to do, and they had told us that if we scheduled an abortion appointment, it tended to make people more comfortable, even if they felt like they were going to cancel it. So they gave us the number of a clinic in Atlanta that specializes in ending wanted pregnancies, or poor prenatal diagnosis. I made the appointment there, and that’s where I ended up going.

I do think maybe if we had looked into other places, or if we had spoken to parents of children with Down syndrome, or if we had spoken to some kind of center or were given any different information, we may have made a different choice. But we were only told negative things. Each doctor was like, “Well, if I were in your shoes, I would terminate. This is what you should do.” They told us, “You can always wait and do it later, but it’s going to be illegal for you soon if you get too far and it will be less healthy for you if you wait,” which I had never thought about; I had never thought it would be more dangerous for me to make this decision later. So I felt very rushed.

I had to have a one-day waiting period and listen to something the state of Georgia makes you listen to. Even the girl said, “I’m sorry, but you have to listen to this recording before you hang up. There’s nothing really true about this statement, but we’re required to share it with you.”

They gave us three options for clinics, which I appreciated. There were lots of options in Atlanta. In North Dakota, where we live now, there’s only one in the whole state. I remember being annoyed that all of my doctors were suggesting we abort, but implied, No, we don’t do that here, so you gotta go somewhere else and you have to walk by protesters and have them yell at you. They just said, “There’s unfortunately nothing we can do for you about that.”

We lucked out on no protesters that morning. Most people who went to that clinic would go on a Friday so they can recover over the weekend, but I ended up going on a Tuesday, so there weren’t that many people there. And we did see them, protesters. But that was after we were already inside; we could see them through the window. I’m grateful we didn’t have to walk by and get yelled at.

My husband came with me. I’m a doctor, and I was graduating that week — I really didn’t care that I was becoming a doctor that week. My entire family was planning to come to my graduation, and so my husband and my mom went with me that day. I was really glad to have both of them there.

We were taken to a separate waiting room for families of wanted pregnancies, and we were told that we were the only ones there for that reason, so we would have the room to ourselves.

Recovery, emotionally speaking, was not easy. I had told a lot of my classmates and friends that I was pregnant. I posted on Facebook that week that we had lost our child. I didn’t say that we’d had an abortion because to us, this was a child that we wanted and a devastating choice. I posted that I was graduating in three days and, you know, please don’t reach out to me, ’cause I’m trying to get through this week. And then my family was there and supporting me. I became a doctor that week.

Once that was over, my husband and I found a family therapist, and we went to therapy for a really long time — that really helped. I found a support group called PassBoards.org, a website for women who have had abortions — it’s anonymous. And that’s been really helpful. I’m still active on that.

I want to tell other women in my position that it does get better. It was very difficult; I felt a lot of shame and regret. But looking back, I can see who I was at the time, and I respect every choice she made. I can empathize and understand why I made those choices. Sometimes I wish I had looked at the ultrasound, but I understand that, at that moment, I couldn’t. I didn’t think I could go through with it if I had. I had zero intention of ever having an abortion in my life. I’m still sad that I did, but I think it’s made me a better person and a better doctor. I’m glad I had that experience; I can empathize with more patients in a way that I didn’t know I could before.

I’m one of those people who doesn’t really watch the news; I’m more of a follower than a leader. But I do feel like it’s my choice with my doctor, and unless you’re qualified to give that kind of advice, you have no right impeding on that relationship. And if we’re going to do what they want to do, there needs to be repercussions toward men, too, not only women. If they want to force us to take care of children, provide resources to make that happen. But I don’t see them doing that, and I also feel like most people who are in politics have probably had this scenario happen — not necessarily my scenario, but some kind of abortion scenario. They can pay it off and get it under the table and don’t have to worry about it. But we don’t hear about those stories, because they have really good lawyers. Until it happens to you, you don’t know.