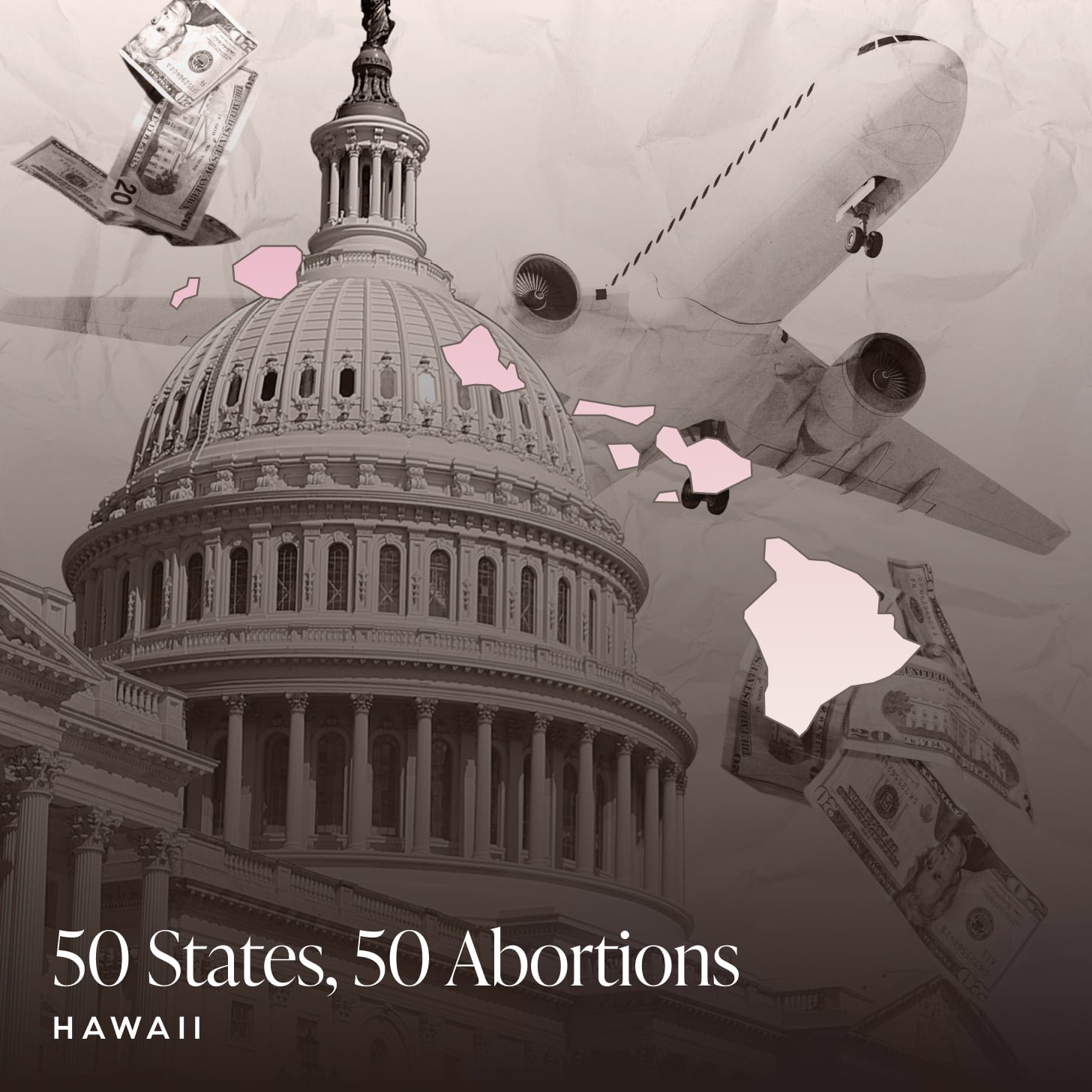 I’ve never had sex education before in my life. I went to a Catholic school since kindergarten, and one of the first times I had sex, I got pregnant. I knew intuitively that something felt wrong or weird, so I took a pregnancy test, and it was positive.

I was only 15, but I considered carrying the pregnancy to term. Because I grew up in a Catholic school, pro-life had been drilled into my values. I felt a lot of shame, because that’s the narrative that my school provided in terms of sex education.

My parents were separated and had been very young when they had me — they were teen parents. I’m also a survivor of childhood abuse. My dad was physically abusive. My mom and I had such a strained relationship and, usually, she was emotionally unavailable, and I always felt like I was walking on eggshells. I felt so fearful of what would happen to me.

When I was trying to figure out what to do, I asked my mom a hypothetical: I told her I was in a life-skills class, and for homework, I needed to get her reaction to a few scenarios. For one of them, I asked, “What would you do if I told you I was pregnant in high school?” And her response was: “I would pack all your stuff and kick you out. If you want to be an adult and make adult decisions, you can raise your family wherever you want to.”

So it was like, OK, she’s definitely not going to be open or have a good response. Because of that, I didn’t talk to anyone in my family about it, and I was really afraid of her finding out. I also didn’t have any teachers that I confided in. My experience with talking to teachers was that it always seemed to get back to my parents. So there was a level of distrust.

I’m so grateful that the folks working at Planned Parenthood treated me as a person who could make decisions about my body for myself. I didn’t ever feel like I was too young to be making that decision. I appreciate that they gave me information in a way that was digestible to me as a 15-year-old, but also that I was being trusted to know my body and what decision I wanted to make. I felt comforted through that process. Sitting in the waiting room at Planned Parenthood, it was the first time I had access to comprehensive sex education.

When I was deciding to have an abortion, I was really worried about my medical records being available to my parents — to my mom, specifically, because I was on her insurance. But the people at Planned Parenthood walked me through my privacy agreement options. Even though my insurance covered the cost of the abortion 100 percent, we ended up creating a confidential file that only I would have access to, and that really eased my anxiety. (Editors’ note: Some states, including Hawaii, require that health plans communicate directly with the individual receiving care to protect their confidentiality, even if they are insured as dependents on another person’s plan.)

It was 2008, and I wasn’t aware of any legal restrictions around abortion in Hawaii. (Editors’ note: According to Hawaii State Legislature, Hawaii allows abortions up until viability, and the abortions have to be performed by a licensed physician.) Planned Parenthood definitely had to confirm my pregnancy, and I had to do an ultrasound to confirm the type of abortion I would need. Then I scheduled my abortion for the next week or so.

I was fortunate enough to live on the same island that a Planned Parenthood clinic was on; most folks on other islands would have to fly to reach it. But even so, this was before Lyft and Uber. I skipped school, and I took the city bus to go to my appointment. At the time, there weren’t any practical-care support programs where I could have someone pick me up. After my procedure, I took the city bus back home.

I think it really affected my body — the stress of moving around so much after such a procedure. I feel like I had more bleeding as a result. And overall, it was just kind of scary to go from having my hand held throughout the process at Planned Parenthood to recovery, which was very much isolating, especially because I was in a household that wasn’t open and loving, and I had to suppress what I was going through.

Not having access to mental health or therapy afterward was hard. I remember just being like, OK, what a big decision. But I had no means to really talk about it or grieve about it with a community. Now that I’m older, I know that community care is so important and necessary.

I also experienced really large blood clots, to the point where I should have sought additional care. But that could have meant another cost, and I would have had to skip school again, and I was concerned my parents would be called. So I thought, “I’m just going to wait and see if it gets better. Hopefully I don’t die or bleed out.” I waited it out and thought it was better to be in school and not have to answer questions from my parents.

I’m definitely happy that I chose to have an abortion. There’s no regrets there. But if I could give advice to my younger self, I think that I would tell her to sit in the care that I deserved after the procedure. At that time, there were still people outside of Planned Parenthood being super hostile. The whole experience, mentally and emotionally, was just so draining that I wish I would have given myself more time to process and heal, instead of going back to life as if nothing happened. Even when you’re choosing to not have the baby and to have an abortion, it’s still such a huge decision, and looking back, I should have sat in my self-care more.

Today, I’m a huge abortion advocate. I got politicized through a fellowship that I attended with Planned Parenthood Advocates of Oregon, which introduced me to the policy side. The overturning of Roe v. Wade is a huge, huge setback and an attack on women and folks who can get pregnant. It’s so unsettling to think that a decision can be made based off a certain interpretation of text — and then the interpretation can be completely changed to make that decision null and void, based off who’s in office, basically. It’s so backwards. Now more than ever, voting and civic engagement and participation are so important because our rights are under attack, and it matters so much who is in office, from your local government all the way to federal.

I also really want to normalize that you can have an abortion just because you do not want to have a baby. I hear so many stories about the medical necessity of abortion, and I think it kind of keeps the shame there or reinforces this idea that you have to have a medical reason to get an abortion. For me at 15, it was a choice. And I think everyone should always have access to that choice.