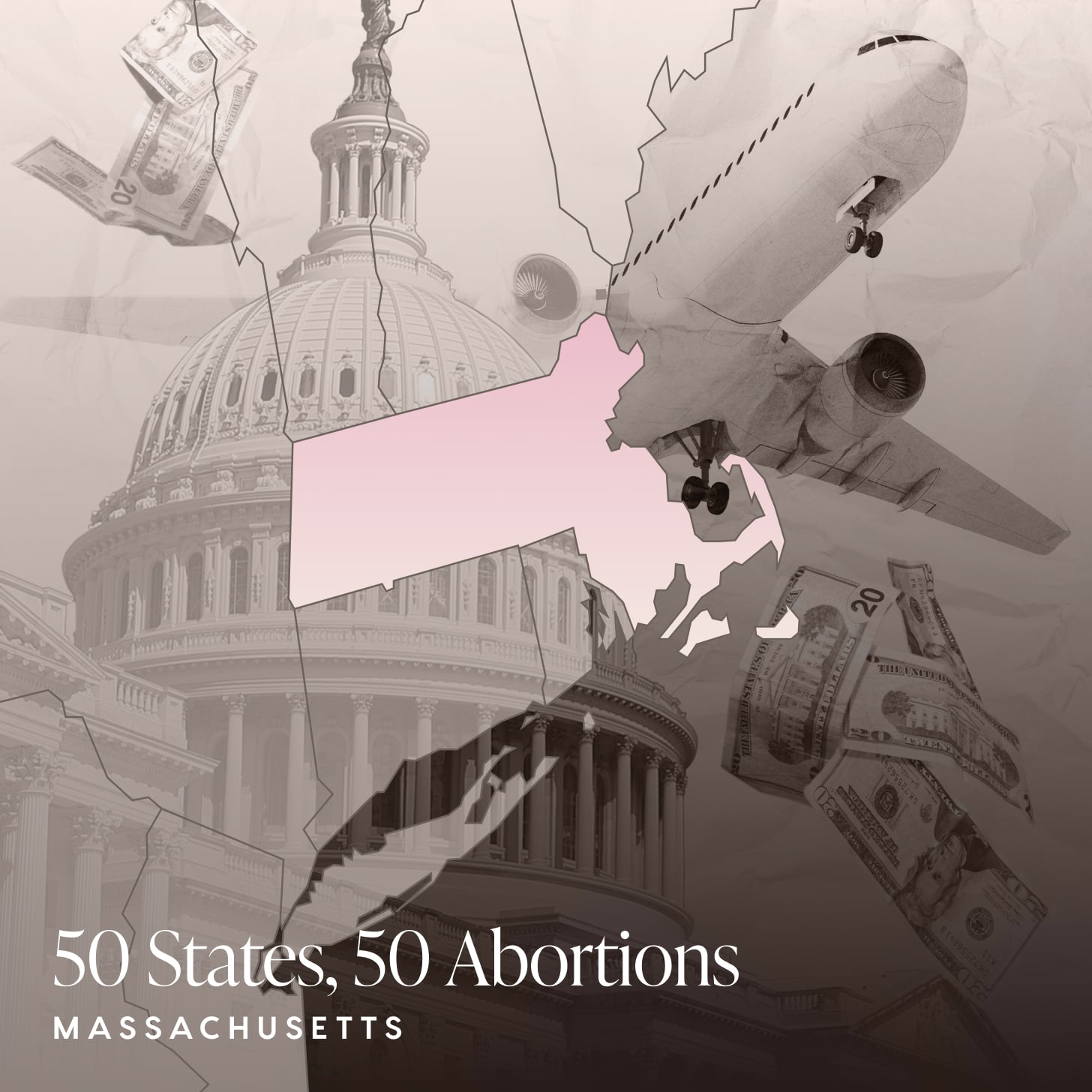 I was 18, living in Massachusetts, and going to community college when I became incredibly nauseous all the time. I lived 15 to 20 minutes away from school, and I remember I would have to pull over on the highway because I was vomiting so much. So I decided to take a pregnancy test. It was positive right away.

At first, I was super overwhelmed, but I was also immediately determined that there was no way I was going to continue the pregnancy. I was struggling with some mental health issues back then, and my partner had a lot of mental health issues going on as well, and I knew right away that this pregnancy was not right for me.

I’ve always felt very strongly about abortion rights, though I can’t say particularly why or where it came from. I just always felt like it was nobody else’s business. How can you require someone to do something with their body that they are not signed up for?

I was raised Catholic, but when I was in my early teens, I remember being in Catechism classes, and a woman came in to show a video about “this terrible thing called abortion.” I stood up and refused to watch it. I left the room and was like, “I refuse to be indoctrinated. It’s more complicated than this.” One of the priests later apologized to me, but that was the end of Catholicism for me, right then and there. I just always felt like it was nobody’s business but the person who’s pregnant. So abortion very much felt like an option for me.

I didn’t want my parents to know, but they noticed that I was vomiting and wanted me to go see my pediatrician. I told my doctor that I was pregnant, and she agreed to keep it confidential and made sure I knew all my options, including abortion and adoption.

This was in the days of the Yellow Pages, and I just looked up “abortion” in the phone book and called the first place listed. I made the appointment for a few weeks out so I had time to save up the money from my part-time job, since I wasn’t going to use my parents’ insurance. I think it was about $450, and my partner was going to pay for half of it, which was hugely helpful; coming up with $225 felt infinitely more possible than paying for all of it myself.

My partner was incredibly supportive in general — and I think felt very guilty and responsible. We hadn’t been using condoms, and I hadn’t been on birth control because I was worried about side effects. So we were just using the pullout method. Honestly, having been raised Catholic, it’s kind of like you have the information about birth control and you know it exists, but you’re not necessarily encouraged to be proactive about it.

We had a Planned Parenthood about 15 minutes from my house, and a friend from school gave me a ride to the appointment and back. When I went in for the appointment, I found out that I was seven weeks and four days along. I remember being so grateful that I was over 18; at the time, if I was a minor, Massachusetts would’ve required a judicial bypass to receive an abortion without my parents’ consent. (Editors’ note: Per Planned Parenthood, a judicial bypass is essentially a private court hearing, without one’s parents present, in which a judge must decide if a minor is mature enough to consent to having an abortion.) I’m not sure I could have navigated the process for a judicial bypass, and I was really relieved I didn’t have to do that.

I think waiting around for the procedure was probably one of the hardest parts. When I got the ultrasound, they asked me if I wanted to see the image, which I declined, and they asked if I wanted to know whether it was multiples. I’m a twin and twins run in my family, but I didn’t want to know because I didn’t think that it would change my decision. So I opted out. But I remember feeling lucky that I had that choice, as I knew in other places, you’re required to look, and so I remember being really appreciative that I was able to control that aspect.

I don’t remember if medication abortion was available at the time, but I had a surgical procedure done. I was happy about it, because it felt like it was the fastest way; you could go in, stay there for a few hours, and when you left, you wouldn’t be pregnant anymore. At the time, they didn’t do IV sedation at the clinic. You had the option of getting what I believe was Ativan, but they would administer it to you, and then you had several hours to wait. So it was nice in the beginning, but then by the time I saw the doctor, I think it had pretty much worn off.

The procedure itself was painful but not unbearable. My doctor was a woman, which I remember being grateful for, and one of the assistants held my hand throughout the whole thing. She asked me about what I was studying in school and was overall just really lovely, telling me that I would be able to get back to focusing on my studies and myself. I remember crying with gratitude that someone understood that I was not a terrible, evil person; I just wanted to continue my education and not be pregnant anymore. I remember feeling tremendously cared for.

Immediately after, I felt so relieved I’d been able to have the abortion and could move forward with my life. But I also remember noticing the other folks crying in the recovery room. It was clear that everyone’s experiences were so different.

The whole process took probably about five or six hours, and I left with a birth-control prescription. I was exhausted for about two days, but I bounced back quickly and didn’t have any complications. Since I lived with my parents, I was a little bit concerned that they might know something was up, but the overwhelming feeling of relief dwarfed any other feeling that I had.

I finally told my parents five or six years later. I told my mom first, and she was incredibly supportive, just sad that I hadn’t felt like I could go to her in the first place. Then a few days later, I wanted to tell my dad. He could tell that I wanted to say something, and he just looked at me and said, “Cara, there’s nothing in the world that you can tell me that’s going to make me love you any less.” I told him, and he gave me a hug and told me he loved me, and it was very affirming.

I started working as a receptionist at Planned Parenthood in 2013, about 10 years after I’d had my abortion. As a receptionist, you’re the first person people see when they come to Planned Parenthood. I’ve checked in people I went to church with, people whose kids I’ve babysat, classmates . . . one of the things that becomes so obvious to people who do this work is that there is no one type of person who needs abortion care. And, as a receptionist, I’d like to think that all of these people were given a really warm welcome into the space.

Soon enough, I also got involved in abortion funding. I sat on the board with the local abortion fund for several years, then I left and cofounded a new abortion fund, called Tides For Reproductive Freedom, with folks in the area. I’ve also done a lot of work with the National Network of Abortion Funds, and my role in Planned Parenthood has shifted to a patient navigator.

I think most of us who worked in this field knew the overturn of Roe v. Wade was coming — but that didn’t make it any less painful. I had a very angry, visceral reaction to the news. I screamed. I threw up. I kicked a tree. I had given up smoking, but I smoked a cigarette, which didn’t make me feel any better.

I see what some folks have to go through just to get care when it’s considered legal, and to now have that protection removed, it’s just devastating. We are living in two Americas: there are some states where folks have access to care and some states where folks don’t, and it just seems overwhelmingly unfair — or anti-American, antidemocratic, all the things — that your zip code and where you live and what you can afford now determine whether you can access care. These are people’s lives at stake, and people’s lives are being ignored, and that’s just infuriating.

Regardless, I do feel optimistic, and my optimism comes from being part of the movement that has at least recently really tried to elevate the voices of BIPOC and women of color who have been doing this work under horrible circumstances for a long time. I get a lot of optimism seeing what’s possible when we move forward in a way that really amplifies those voices. I’ve seen some of that shift already, and I’m very hopeful that that will be what ends up bringing federal protection back.