The following story is a part of POPSUGAR’s Sex in a Post-Roe World series, which explores how limited (or non-existent) abortion access is changing how people approach sex, dating, and relationships.

The trickle-down effects of the overturn of Roe v. Wade have been enormous. In addition to restricting abortion access, the Supreme Court decision has interfered with people’s ability to obtain health-saving medication and life-saving medical treatment. It’s also impacted how people plan their lives, select their partners, and engage with (or abstain from) sex.

In an attempt to learn more about how people are managing sex and hookup culture post-Roe, POPSUGAR reached out on Instagram to poll our followers for anonymous data about if and how the Roe v. Wade overturn affected their approach to relationships. The results were clear: the overturn made people want to date and have sex differently.

The survey indicated that the attack on abortion rights and access changed how people discuss sex with their partners, for instance. It also may have killed the allure of having a casual situationship all together. People are shying away from these types of arrangements and being more intentional about seeking out people with similar values and getting on the same page before sex or commitment. (So much so that dating apps like Tinder and OKCupid now equip profiles with optional “pro-choice” badges in an effort to inform their users who they might be matching with for a hookup.)

Another trend: ever since June 24, condoms are making a comeback in a big way.

In POPSUGAR’s survey, 74 percent of the 742 respondents said they’ll be more likely to wear a condom or encourage their partner to wear a condom during sex than before Roe was overturned. Clearly, with abortion access off the table for so many, preventing unwanted pregnancy is a higher priority than ever before. Another 82 percent of the 653 survey participants also reported that they were now more likely to have a conversation about their plan of action if pregnancy does occur before a sexual encounter with a partner. 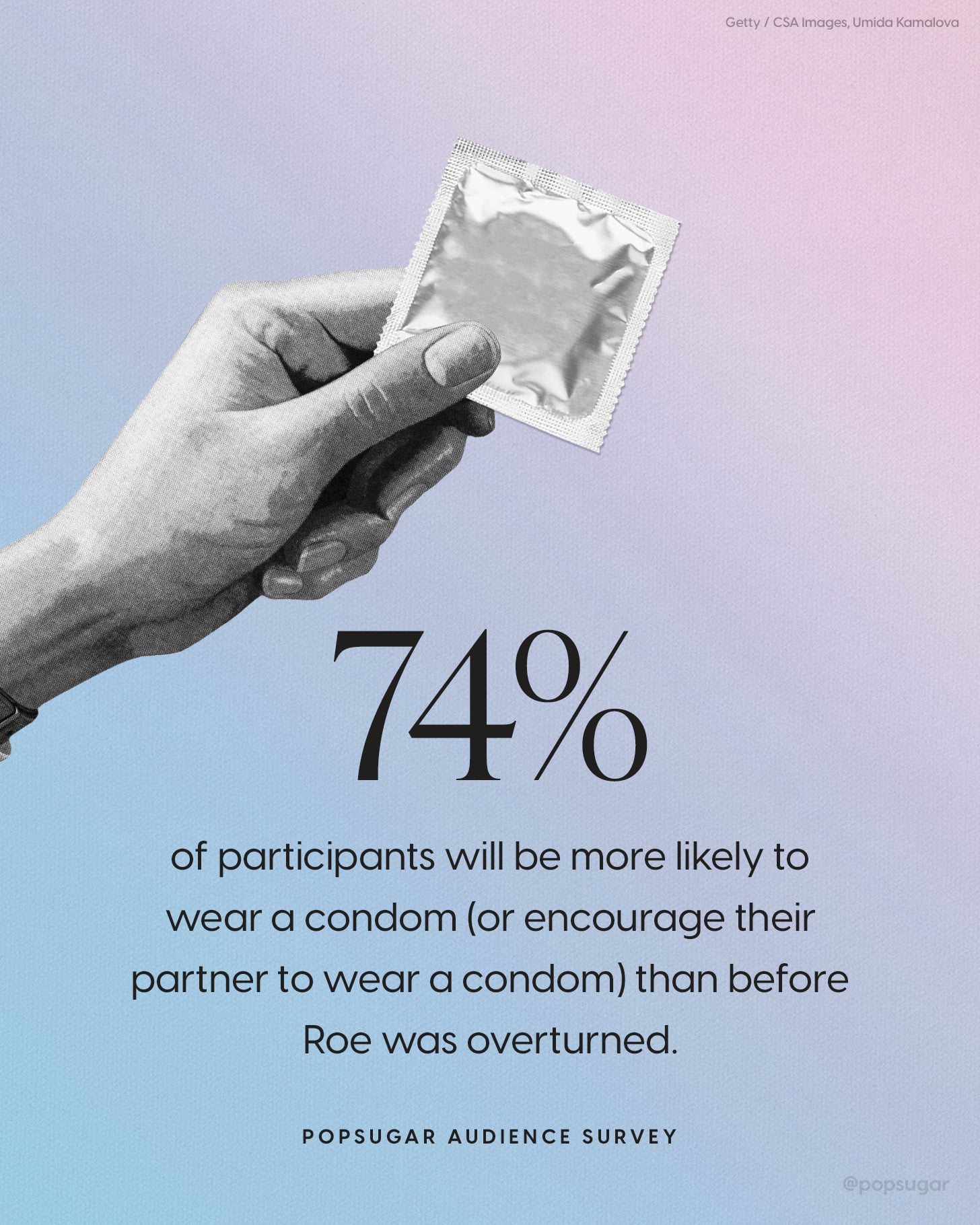 What’s more, market research is showing that in this case, people’s actions are lining up with their words — which is not always a given when it comes to safe sex. The sexual wellness company Cake told POPSUGAR they experienced a 36 percent jump in condom sales from June to July of 2022, “which was likely caused by the Supreme Court ruling.” Meanwhile, CNN reports that emergency contraception and birth control sales are up, too, with the online pharmaceutical company Nurx reporting a 300 percent increase in prescription requests for emergency contraceptives. (Reminder: some experts suggest avoiding stocking up on emergency contraception for now, though it can be useful to keep a few doses on hand.)

Simply put, talking about condoms and birth control is one of the most important things you and your partner(s) can do to avoid unwanted pregnancy as we navigate this new reality. Even if it doesn’t feel sexy to bring up, planning your contraceptive care is absolutely necessary, and all partners, regardless of gender, should share equal responsibility in having the safest sex possible.

A refresher on safe condom use: there are two types available — internal (also called “female”) condoms that are inserted in the vagina and external (also called “male”) condoms that fit on the penis. You should only use one type of condom during sex, as using both an internal and external condom at the same time, or doubling up on either type can cause either or both condoms to break, per the CDC. But, when used correctly every time you have sex, the National Health Service reports that external condoms are 98 percent effective and internal condoms are 95 percent effective against pregnancy.

The CDC also says that consistent, correct condom use can provide an effective barrier “against even the smallest STD pathogens,” resulting in highly effective protection against HIV, as well as reduced risk for STIs like chlamydia, gonorrhea, trichomoniasis, and HPV. This means it’s important to not only use condoms even if pregnancy isn’t possible between partners, and also to get tested for STIs regularly, especially if you have more than one sexual partner. You can buy condoms at any convenience or grocery store, or get them for free at most sexual health clinics.

Of course, having protected, risk-aware sex doesn’t solve the wider abortion crisis (though voting, donating to local abortion funds, and getting involved with advocacy groups are other actions you can take). But it will help you and your loved ones stay as safe as possible.