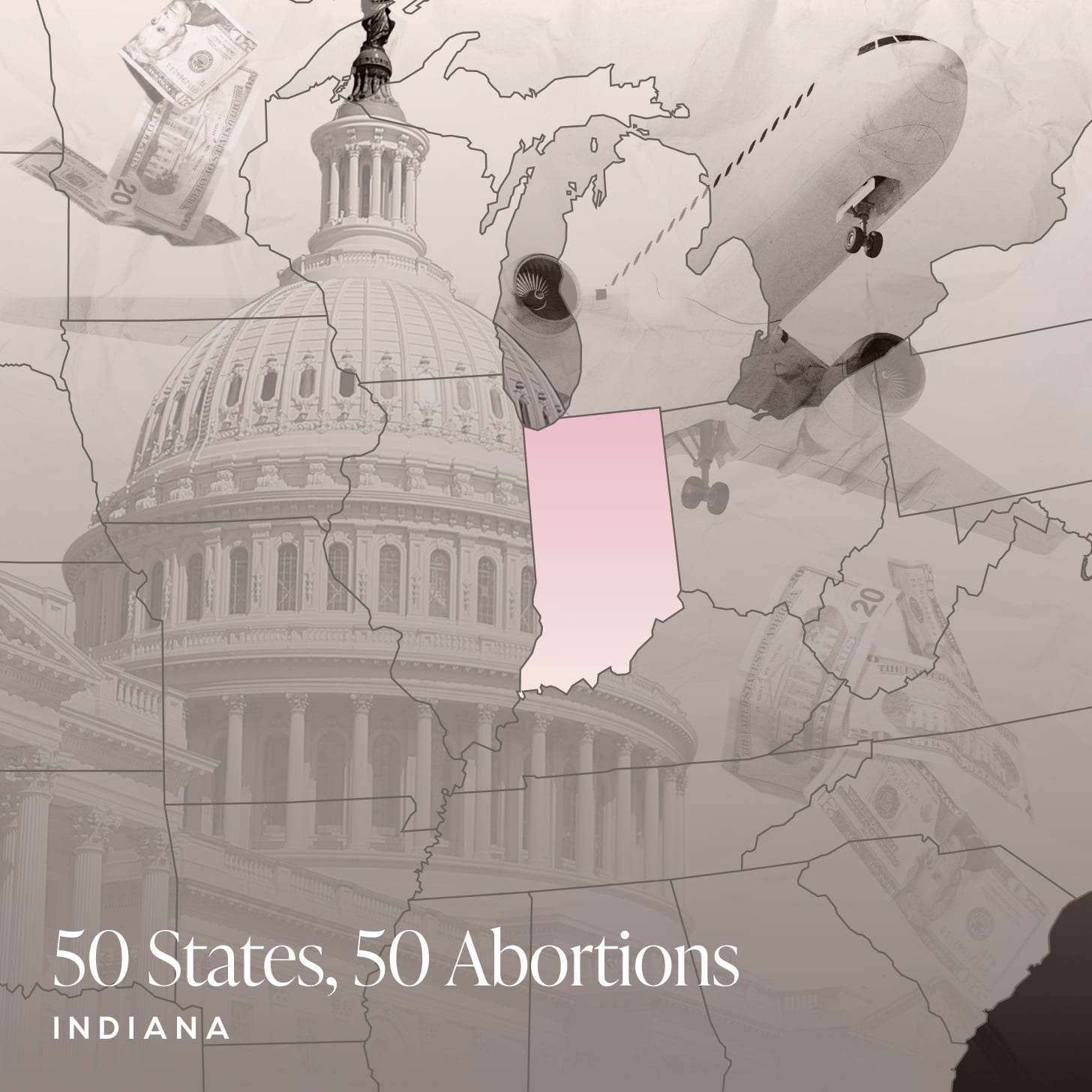 I was 26. I was on vacation in another state, and I kind of just knew — I had this intuitive feeling that I was pregnant. I actually never took a test. While I was still on vacation, I made an appointment with Planned Parenthood back in Indianapolis, so I could go in when I came home and take the next steps to schedule an abortion.

I didn’t tell anyone. I went to that appointment, which was a Tuesday or a Wednesday, confirmed that I was pregnant, and set a date for the procedure. Then I went back to the apartment I shared with my boyfriend and told him that I was pregnant and having an abortion that following Saturday. From there, he became the primary person in my support system.

Originally, I had a surgical, in-clinic procedure scheduled for a Saturday. I went in and prepped for that, but then they couldn’t perform the abortion for some reason. Instead, they ended up giving me the abortion pills for a medication abortion.

My body didn’t respond well. I actually had to get more pills from a local pharmacy because I threw up the ones I took. I ended up missing three days of work because I was so sick from the cramping and throwing up. I have very caring coworkers, so it was a little hard, emotionally, to not feel like I could be truthful with them. Instead, I had to say, “I was sick,” and not elaborate.

A couple of weeks later, I had another appointment at Planned Parenthood to check to see if the medical abortion had worked, and it hadn’t. So they scheduled another surgical, in-clinic procedure. Third time’s the charm: finally, they were able to perform the abortion successfully.

The day it was confirmed that I was no longer pregnant was one of the happiest days of my life. It sounds weird to say, but until a person has been in that situation, where they find themselves pregnant and don’t want to be — it was just such a relief to have it done with, especially because my ordeal went on for five or six weeks. I had to go through an unsuccessful medical procedure and then had a bad experience with the medication. I ultimately needed another try to terminate the pregnancy. So every week, my worry was growing. (Editors’ note: When this took place, Indiana limited abortion after 20 weeks post-fertilization, or about 22 weeks of gestation, with exceptions when the life or health of the mother was at risk.)

At the time, nothing prohibited me from getting to the actual Planned Parenthood location and having the abortion. The biggest obstacle was more of a psychological one, because there were protesters every time I went. I would turn into Planned Parenthood and see dozens of people with signs. One or two police cars and at least two officers would also be there, and I felt like this was more to protect the protesters than the people seeking care at the clinic. That was the biggest psychological obstacle.

Also, in Indiana at the time, you couldn’t have the procedure the day they confirmed you were pregnant. You had to wait at least 18 hours, and you were told to sign a lot of paperwork. You were educated about fetal health and shown a lot of pictures. It was more about the unborn child and the fetus than the person seeking the care, which struck me as odd — and just another thing prohibiting a person from getting the care they need as soon as they want it. If you want an abortion, you probably don’t care about or need the information they force you to sit through and the paperwork they make you sign confirming you sat and listened.

When Roe v. Wade was overturned, I had never been so angry in my life. It’s hard to even put into words how frustrating it is that legislators can make laws about the bodies of people with uteruses. How can you make a judgment call for someone else? How can you ever put yourself in their situation if you haven’t lived their life? Your body is your body, and every person should be able to make whatever choices they want about their body. In my lifetime, I didn’t think I would see something as big as this get overturned; it feels surreal.

Looking back at my experience, I feel so grateful for the staff at Planned Parenthood. They were incredibly kind and gracious. Some of the best medical care I’ve ever received was at this Planned Parenthood clinic. I think they felt just as relieved as I did when my abortion finally was successful, because they had been with me on this journey. I felt like they genuinely cared about helping me achieve the outcome I wanted, so I wouldn’t be stuck in this situation I didn’t want to be in.

I remember afterward sitting in an observation room. The room had big comfy chairs with heating pads, and the staff offered snacks, and it just felt like a group of aunts and all the aunties were there taking care of you. It felt familial and genuine and sincere.

That day, I had some heavy bleeding that required a lot of extra pads. But I think I did putt-putt, and then I got a pedicure — a little self-care and distraction from finally having this traumatic thing be over.

I paid around $770 altogether. They gave me the pills for free since I’d already paid for the first procedure, and they didn’t charge for the second surgical in-clinic visit because it kind of all counted as one visit. My insurance didn’t cover any of it. I know they do have different funds and foundations to help people with their abortion cost, but I didn’t use them, and I didn’t ask my boyfriend to pay for it. At the time, he was unemployed, so I wanted to take responsibility for that and not put him in a hard spot.

Besides with my boyfriend, I don’t talk about my procedure, unless absolutely necessary, like with medical professionals. As far as friends or family, I haven’t told any of them. It’s not that I’m embarrassed — I’m not embarrassed. I’m not ashamed. I feel very confident and happy with my decision. It’s the stigma still surrounding abortion that’s preventing me from sharing my story with them. I also don’t want them to look at me and only think of abortion.

As weird as it sounds, I wouldn’t change a thing about my experience. I’m not saying, “Oh, I would love to spend another almost $800 and go through this again.” But it was a growing experience, and it taught me you can do hard things, and you need to take care of your body, and you are much stronger than you think.