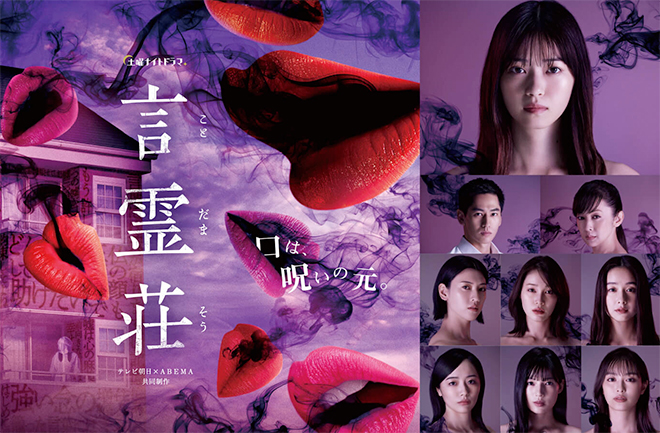 Synopsis
25-year-old Utagawa Kotoha is a lowly ranked ViewTuber who believes in the power of words and wishes for people’s happiness. She rejoices when unit #7 at Ladies Court Hadori, a very reasonable and prime apartment building exclusively for women that she has been eyeing all this while, becomes available. Through the introduction of her friend Agi Sayaka, a songwriter who lives in unit #1, Kotoha is able to become a new resident. That is when she gets entangled in mysterious phenomenon where words spoken within the building become reality. On the day when Kotoha moves into Ladies Court Hadori, a song that Sayaka wrote enters the hit chart. Kotoha is so happy for Sayaka that it feels as though she is the one who achieved success as a songwriter. However, Sayaka seems to have mixed feelings. She appears to have had a falling out with the male singer and while she is pleased that her song has come out, she also expresses regret when asked and mutters, “I wish he’d disappear to an unknown world”. Right after she says this, the singer suddenly experiences pain mid-song and dies mysteriously. Kotoha is trying to cheer up Sayaka, who remains shaken after the shocking incident, when a man walks up to them without warning. A self-proclaimed psychic, Nakame Reishi says there is a strange presence in Sayaka’s apartment from the bad aura around her, and has come to recommend an expensive talisman to protect her. Kotoha thinks he is a fraud and tries to drive him away but Sayaka implores him to see her apartment. Reishi realises from her tense expression that the mysterious phenomenon is genuine. He actually does not have psychic abilities and asks his aunt Toshima who is an exorcist. But she demands 1 million yen for the danger that she will be put through to get rid of the ghosts in Ladies Court Hadori … …

Characters
Nishino Nanase as Utagawa Kotoha
A ViewTuber. She is a dreamy, simple, innocent young woman and unnecessarily cheerful. She would say, “Positive words bring happiness”, “If you constantly verbalise your dreams and wishes, they will surely come true some day” and “Let’s attract good luck with positive words”. However, her ongoing campaign of enlightenment through her Utagawa Kotoha no Hikiyose Channel, has not resonated with the public. She is easily scared and yet full of curiosity. She becomes a new resident of Ladies Court Hadori through her friend Agi Sayaka’s introduction but ends up diving into a world where words can mysteriously alter reality.

Nagayama Kento as Nakame Reishi
A self-proclaimed psychic. He tells a pack of lies, scheming to make easy money by selling items which he claims will bring good luck with a sales pitch about his grandmother being a medium. However, he is far from successful in his ploy due to his innate goodness. He has no other redeeming points. He makes Utagawa Kotoha’s acquaintance through an unexpected turn of events and gets entangled in the mysterious phenomenon at Ladies Court Hadori. He does not have psychic abilities but it is true that his grandmother is a medium.

Saito Yuki as Toshima
Nakame Reishi’s aunt. A chief priest who usually works in a Shinto shrine. She is good at Japanese archery. While she is an exorcist, she turns around and demands 1 million yen from Utagawa Kotoha and Reishi for the danger that she will be put through, saying that she will not be able to exorcise the spirits in Ladies Court Hadori if she cannot determine actual conditions. She eventually gets to the bottom of the mysterious phenomenon where words spoken can alter reality and gears up to take action. However, no one knows the extent of her powers of exorcism.

Miyoshi Ayaka as Agi Sayaka
A songwriter who is Utagawa Kotoha’s friend. She brings Kotoha into Ladies Court Hadori. Although she has been struggling to become popular, while watching Utagawa Kotoha no Hikiyose Channel and talking positively about her dream, the song she wrote becomes a big hit.

Uchida Rio as Watanabe Hitomi
An intelligent and knowledgeable magazine editor. She shows concern for Utagawa Kotoha who is troubled over Ladies Court Hadori’s mystery and emphatically listens to her problems. Although Kotoha and Nakame Reishi rely on her, her behaviour soon becomes conspicuously baffling.