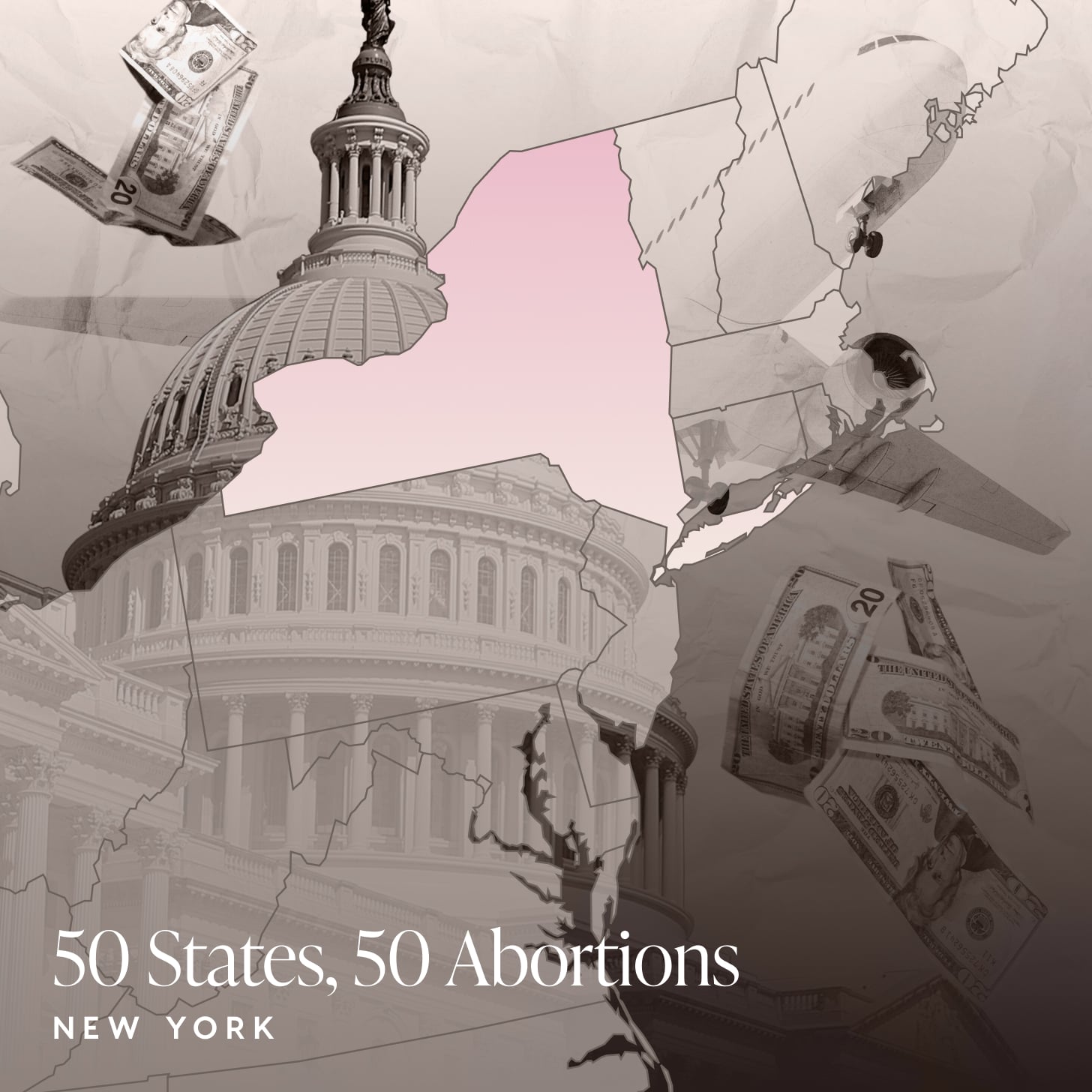 I was 24 and living in Bushwick, Brooklyn, at the time. It was summertime, and I was in my world of being single, living in New York, dating multiple people — all that.

It sounds kind of stupid, but I didn’t realize I wasn’t getting my period. When I was younger, I struggled with an eating disorder, so I had gone on and off of having my period regularly. I was waking up nauseous, and there were definitely changes going on in my body, but I figured, Oh, I’ve been partying. I’m young, things happen. And so I ignored it for a really long time — longer than I should have.

I was a junior retoucher at the time, working a ton, and I was at a client meeting when all of a sudden I got hit with this insane wave of nausea. I ran out of the room to try to make it to the bathroom and proceeded to puke all over the floor, at which point I got in trouble because my boss thought I was hungover, even though I wasn’t. My industry was and is just filled with men; I think there were only two other women in my office. So I already stood out, this young girl.

On a trip with my cousins the week afterward, I was like, Yeah, this happened, I feel like I should take a pregnancy test. So my cousins — who are basically my sisters — went with me to the CVS. They sat with me while I took the test, and of course, it was positive.

It occurred to me at that moment that all of these things were already going on in my body, so I must’ve been decently far along. At first I was like, F*ck, I don’t even know whose it is. I was in disbelief. I felt alone and scared; I couldn’t comprehend the magnitude of it. And I was also unsure if I even wanted an abortion, so obviously, a lot of decisions were going through my brain.

I thought a lot about it, and I think ultimately, the reason I decided to have an abortion was because I didn’t know who the father was. I sat with my mom at one point and told her, because I couldn’t even afford to get an abortion on my own. She looked at me and she said, “You know, if you want to do this, we can do this.” And she paid for it.

The only appointment I could get was in two weeks, so it was two weeks of going back and forth about it and not being sure what I wanted to do. Even when it was happening, the abortion itself, I don’t think I was 100 percent sure. I knew it was the right thing to do, but maybe because my hormones were such a mess, maybe because at that point I did want to eventually have kids, I was unsure.

When you’re 24 and living in New York and single, there’s nothing about your life that’s set in stone. I wasn’t doing what I necessarily wanted to do in life; I didn’t make a lot of money. But in hindsight, it was 100 percent the right choice for me.

I think the overruling of Roe v. Wade is terrible. What upsets me is this feeling that our bodies aren’t really ours anymore and that people are being forced to have children.

What also upsets me is that a lot of cycles end up perpetuating themselves. There’s this American idea of “pull yourself up by your bootstraps and figure it out,” but how can you, when you’re 17 years old and forced to have a child you don’t want? Also, there are women who don’t want to have kids. If they’re forced to have them, those kids can grow up unhappy, unwanted, and uncared for.

It makes me feel sad for the future of America. If I could talk to the Supreme Court judges who struck down Roe, I’d tell them to mind their own f*cking business. It’s blunt, but how is my body any of your business? Men have no clue how hard it is. They might say, “Well, just give it up for adoption,” but the process itself is unbelievably difficult. To stay pregnant with a baby you don’t want, to go through that pain and anguish, to watch your body change, to throw up all the time, unable to do anything? That’s a year of your life that you don’t want to give up. And for women like Amy Coney Barrett: do you have no empathy? You were lucky enough to be able to have children and have them because you wanted them, when you could support them. Why can’t you afford me the same?

I don’t necessarily see it happening, but I would love to see a future in which abortion is free and available to everyone. Who wants to do a payment plan for an abortion? That’s horrible; you just want to get it over with. I think the way that detractors look at it is that if it’s free, it’s like “OK, no big deal, I’ll go get an abortion, whatever.” And I don’t think that’s the case; I don’t think there’s a person who gets an abortion and doesn’t feel conflicted about it. They might say, “We’re paying for ‘loose’ women to go out and sleep with whoever they want and get abortions readily,” but that really isn’t true.

My advice for other women in a post-Roe US is that as a woman, as the person who would have to bear the brunt of being pregnant, I think what you want to do is what you should do. I wish other women seeking abortions comfort and health. I hope that wherever they get them and however they’re able to do it, it’s as painless and streamlined as possible, but that’s not really the case anymore. I wish them luck and strength. Until we can get abortions freely, we have to keep fighting for what we know is right. But to give up? We just can’t. It’s very privileged in this moment, to give up. People need access to abortions now more than ever.

If you or someone you know is struggling with an eating disorder, the National Eating Disorder Association (NEDA) has resources available including a 24/7 helpline at (800) 931-2237. For a 24-hour crisis line, text “NEDA” to 741741 or use its click-to-chat help messaging system.