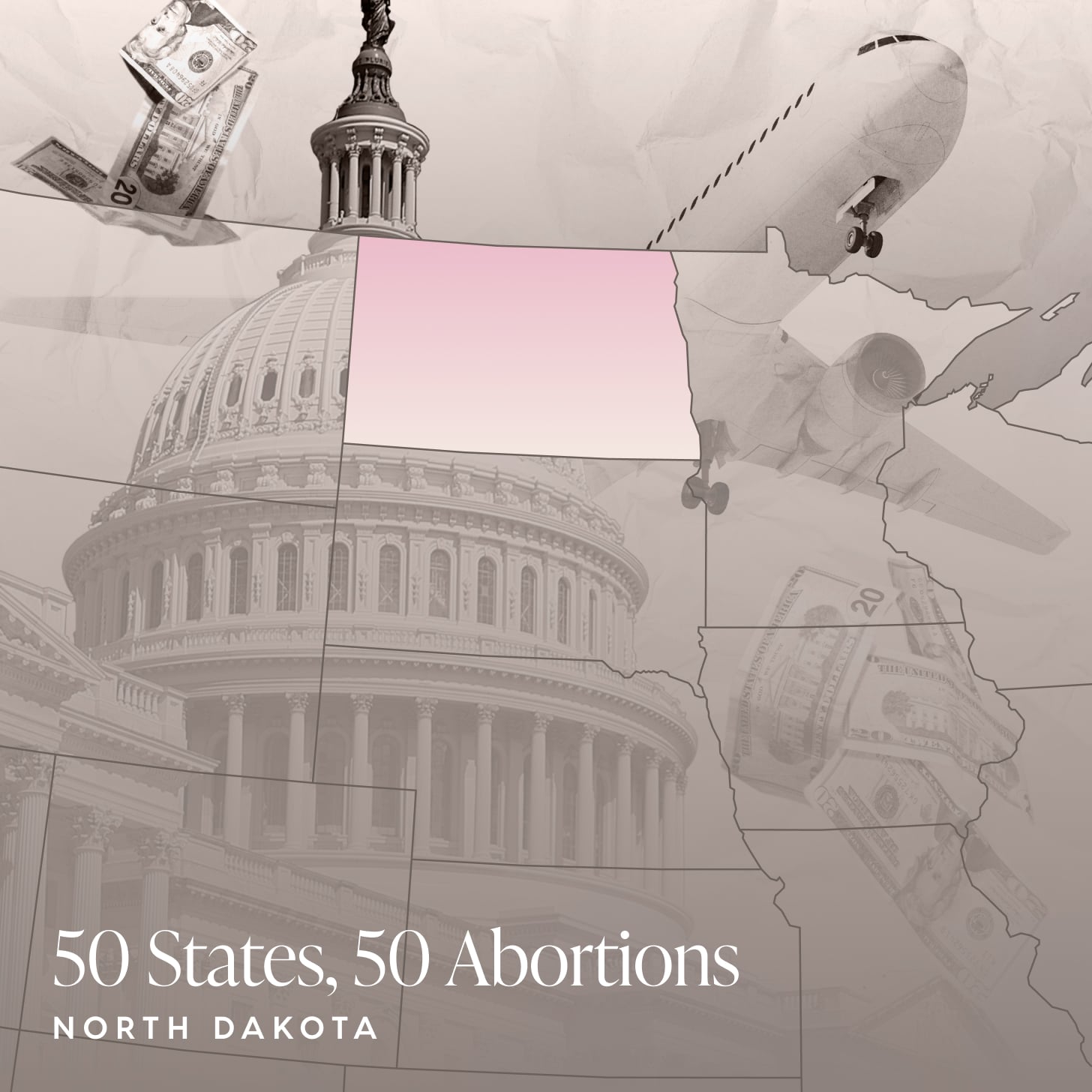 It was one of those dramatic moments the last semester of my senior year. I was going to AP English class, and suddenly I was like, “I need to run to the bathroom.” I puked. And then it happened the next day, and the next day. I had no idea why else I’d be continually sick in the morning, so I thought I might be pregnant. I come from a Catholic family, and my friends in high school were a lot less radical than me. I already knew everyone’s position on this, so I kept it to myself. I went to Walmart and bought a test.

I remember sitting there, just realizing I was in a Walmart bathroom taking a pregnancy test. This is out of any white-trash movie. I looked at it, and the line was barely there, but I saw on the box that even a slight line could mean that you’re pregnant. I was devastated. I was extremely privileged in that I had a car and parents who were not controlling of my whereabouts, so I got myself to a Planned Parenthood and scheduled an appointment. They did a pregnancy test, and I immediately knew what I wanted to do. The woman who did the test wanted to talk about my options and said she didn’t want me to make “a hasty decision.” I said, “No, I absolutely know what I want.”

My 18th birthday was in a few days, and it was the saddest birthday. It honestly ruined birthdays for me for a decade because of the complete dread I felt. This was a little bit of that teenage mindset, but I made the decision that if I could not get an abortion, then I would end my life. That was my reality; there was no back and forth. And I was going to do my best to get an abortion.

Teen pregnancy was everywhere — in the news, on reality TV, in my own school. It was a hot topic that lacked compassion and critical analysis. The discussions were centered around disgust with the girl’s moral failure and her obligation to bear the weight of her bad choices. It was seen as the ultimate taboo. Whatever the girl decided to do in the end, once people knew she was pregnant, she would be traumatized either way. At that time, I felt death would be better than to suffer the social and physical punishments of a teenage pregnancy.

Getting an abortion costs money, and despite growing up in a very loving home, there wasn’t anyone I felt I could talk to to help me financially. I found an online abortion fund that was able to help, but unfortunately, it only covered half of what I needed. I had been saving up money in this jar to buy a laptop, so I had to take it from there to cover the rest. Eventually, my mom asked, “What happened to all that money you saved?” I fought back tears and told her I had to use it for something important.

It was the middle of winter in North Dakota, and it was time for my appointment. I was alone and shaking nervously when I arrived. It was my first time at that location, and I couldn’t find the entrance. I was immediately bombarded by people outside. It didn’t click in my head that they were protesters. I was in this moment of panic, just trying to find the door, and they were refusing to tell me where the entrance was. I remember hearing, “We know what you’re here for. It’s a sin. It’s evil here.” I finally got inside very shaken, but when I went to the front of the clinic, I felt better. They were so nice, and they really made sure to cover any bases and ensure that this was my choice and not something that was being forced upon me. “Yeah, I want this, please. Let’s move on. I’m ready,” I said.

They did an ultrasound and asked if I wanted to listen to the heartbeat, but that wasn’t necessary for me. The procedure was painful. It was quick, but I remember holding the hand of someone in the room, and she was asking me about my choice. She said, “Oh, I see what you’re saying. I see that this is right for you.” Just giving me that kindness and understanding that I knew I wasn’t going to get from my community was so reassuring.

I went to my appointment alone, so I had to wait until they allowed me to drive home. I sat in the waiting room for several hours and saw people go in and out. There was this journal where you could write down your feelings and read other people’s stories. While I was processing what I had just gone through, I was able to read this, and it was really influential. I felt this sense of support and communal mourning.

The stories varied — a few, like mine, were very positive, but there was a lot of social shame in this journal. It was so overwhelming. I suddenly felt this invisible bond and sisterhood with strangers who all shared this collective trauma. The trauma wasn’t from getting an abortion. The collective trauma was the shame our community and society made us feel, despite the fact that this was a medical decision we knew was best for us. Now, when I go back home, if I drive by the clinic and see protesters, I shout at them to take back a little bit of that power.

I told one classmate I was pregnant before I had the abortion, and their response — to have the baby and give it up for adoption — was so unrealistic as to what my future would look like if I moved forward with the pregnancy. Their advice was based more on their philosophies than what they actually thought was best for me. I was just so grateful that I could find neutral resources to support me without a stigma or ultimatum attached to it. If I hadn’t had those resources or lived in that part of the state, this would not have been my reality.

I say this as a North Dakota middle-class white woman: I received the care I wanted, even as traumatic as it was, because those intersections were a benefit to me. It’s even harder for other people in North Dakota, and that’s truly terrible. But I am very happy that I was able to make that decision for myself. It was absolutely the right decision, and I have a happy life because of it. I don’t think about the abortion. I think about my life in the present and how much of a gift it was for myself and for my future self and that it allowed me to live how I wanted to.

I firmly believe that forced birth is torture — it is torture in every sense of the word. Forced birth and forced sterilization have affected communities beyond white middle-class women for a very long time. My wish is that even if Roe v. Wade is secured again, the energy and focus will continue instead of fading away like the job is done. That focus and energy need to go to other communities who have more obstacles than communities of white women. None of us is free until all of us are free. I will be fighting with my money, my body, my mind, and my social relationships to win that guarantee for others as well.

If you or a loved one are experiencing suicidal ideation or are at risk, the National Suicide Prevention Lifeline has several resources and a 24/7 lifeline at 1-800-273-8255.