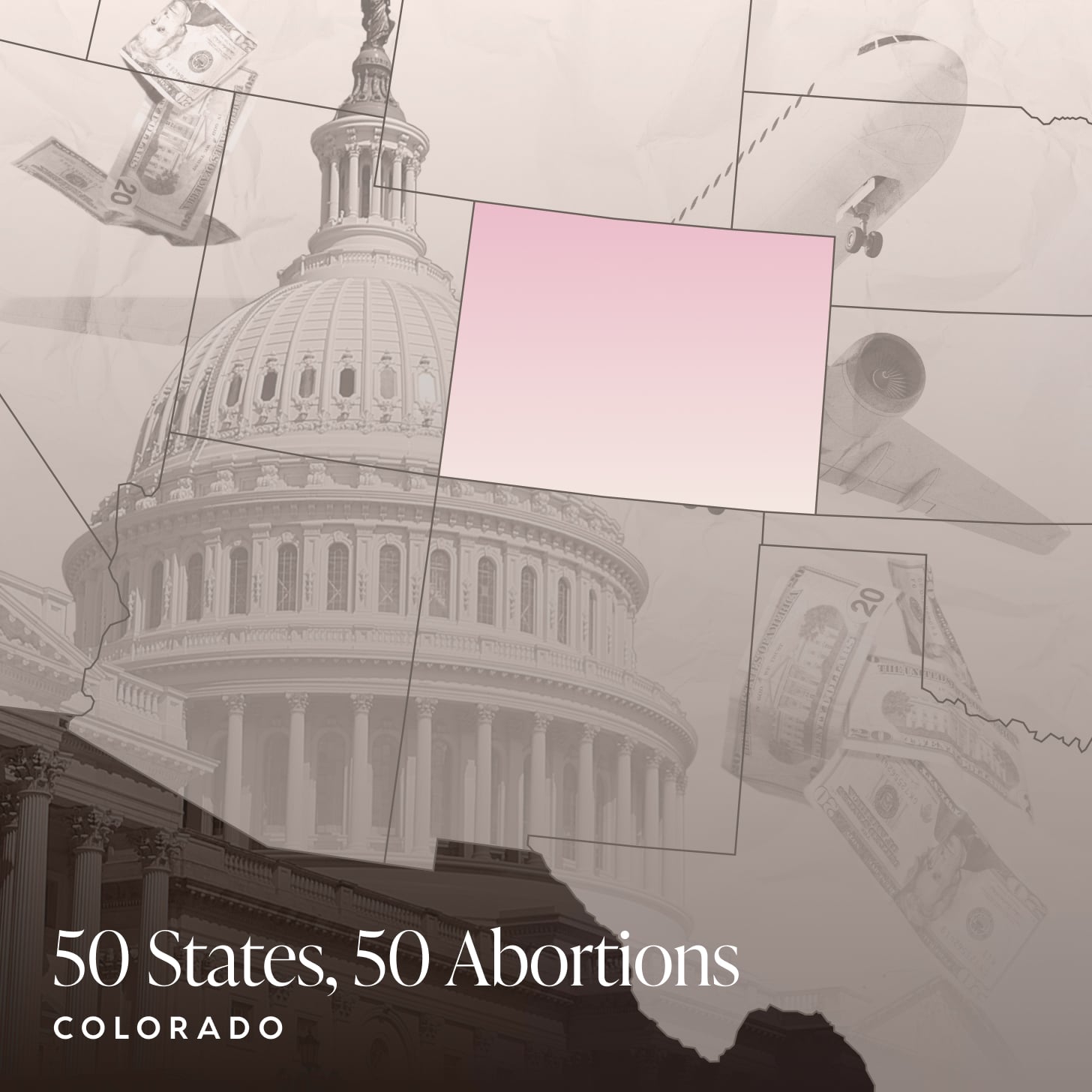 I missed my period — it was that simple. That’s how I knew I was pregnant. I went to Planned Parenthood, and they confirmed I was at least eight weeks along.

It was 2010, and I was living in Colorado. I was 33 and dating someone I’d met through work. We were monogamous, but it wasn’t super serious. Neither of us wanted to have a kid. For that reason, we were very safe and always used condoms. Still, I guess the condom broke or something, and that was it: I was pregnant.

I’d told him that I’d missed my period, and he said, “If you’re pregnant, we have to keep it.” He’s Catholic, and he believed that was the only option.

But not too long before I found out I was pregnant, I learned that my partner was associated with some very dangerous people. If the situation had been different, there’s a possibility I would’ve gone through with the pregnancy. But I didn’t want to be connected to him and that kind of violence, and I certainly didn’t want to have a child who linked me to him for life.

So I took a few days to think about it. I didn’t know if I wanted to be married or be a mother ever. And just the thought of being tied to him, considering his connections, I was like, “What am I doing? There’s only one option.”

My friend — the only person I told about the abortion at the time — helped me figure things out and make a plan. I’m still grateful for her support to this day. It’s unfortunate, we don’t speak anymore, but I will forever be grateful for the assistance and for the friendship and love that she showed me. She took me to Planned Parenthood, and I got a medication abortion.

Now, I’d lived in New York City on and off since 1995, and I’d been going to Planned Parenthood for reproductive care and general healthcare there for years. Pretty much every single time I visited a clinic in New York, I had somebody in my face going, “You’re making the wrong decision.” I’m like, “Oh my God, you’re saying I shouldn’t have a Pap smear and make sure I don’t have any kind of STD? That’s the wrong decision?” Luckily, in Colorado, there were no protesters, and the care I received was compassionate and clinical. Nobody tried to talk me out of it. I went in, I said I wanted to be treated with abortion care, and that was that. I was sent home with pills and instructed how to take them and who to call if I had any complications, which I did not.

Physically, it was horribly painful. These were like period cramps on steroids. I’ve never been in worse pain. I was in bed for about 24 hours and spent the whole next day recovering physically, just resting, being super exhausted. Emotionally, the only thing that I felt was relief. I never waffled on my decision.

I knew my partner wouldn’t be OK with me having an abortion, so I just didn’t tell him. I didn’t want to have a conversation, honestly. And it’s my body. I was the person who would’ve gone through a pregnancy, not him, so it was my choice. I ended up telling him I had a miscarriage, and he knew I was lying, but he didn’t call me on it. In the three weeks after I had the abortion, which was the end of our relationship, he said to me numerous times, “I think you had a f*cking abortion.” But I never admitted it.

Looking back, the only thing I’d do differently is not tell him I was pregnant in the first place; I’d just get an abortion. It was none of his business, and he was never going to be a part of my life. I will never subscribe to the idea that a man has any right to tell me what to do, even if it’s his child, even if we’re married and totally in love. Ultimately, it’s my decision.

And I’d made the same decision to get an abortion two years prior. I got pregnant, I talked to my boyfriend at the time, and we quickly decided neither of us wanted kids. After I had the abortion, we stayed together for about another year. It was a different situation from my later abortion. This was somebody I thought I could be in a serious, committed relationship with; perhaps we could get married at some point. But he turned out to be a horribly abusive person. He had a wicked drinking problem and ended up trying to kill me, so I had to get a restraining order. I’m happy I was able to leave that relationship — and I wouldn’t have been able to do so if I wasn’t able to get that abortion.

My second abortion was 12 years ago now, and I’ve never thought, “I wonder what would’ve happened if I had had a baby? I wonder if it would’ve been a boy or a girl, what she would have looked like, if she would’ve had my eyes?” I’m happy that I was able to receive the care that I did, and I have a really good life right now, a career I enjoy. I’m married to a wonderful man, and none of those things would be possible if I hadn’t been able to access abortion.

My advice to anybody in a situation where they’re unsure of what to do with their pregnancy would be to go with your gut. If you have somebody you can talk to who you trust and who’s not biased, talk to that person. If you end up in a situation where you feel like someone is passing judgment, don’t listen to them, and listen to yourself. It’s nobody’s business but yours. Follow your heart. Abortion isn’t wrong; abortion is healthcare.

It didn’t take me having an abortion to feel this way, either. I started marching in support of Roe v. Wade when I was 13 years old with my best friend. When Roe was overturned in June, I just felt this sense of impending doom. My fear is that nobody understands this is only the beginning, that it’s just going to get worse. This is a symptom, and the illness feels fatal.