It’s fair to say that Netflix seemed bullish about their kids offering in 2020. Content from their stable of acquired thoroughbred creatives had started to land. Disney veteran, Glen Keane, supplied preschool series Trash Truck and animated feature, Over the Moon. High School Musical hitmaker, Kenny Ortega, had delivered the live-action series Julie and the Phantoms. In animation, content chief Ted Sarandos stated aspirations to reach 6 features a year and catch or maybe even pass Disney.

And there was plenty to be excited about in 2021. Kids’ series from the Obama’s Higher Ground productions were incoming. The pipeline from preschool power player Chris Nee (Doc McStuffins/Vampirina) was also starting to flow. On top of this, the covided theatrical landscape afforded Netflix the opportunity to cherry-pick a couple of additional titles from the Sony Pictures Animation feature slate.

Content discovery strategies on Netflix were also evolving.  A dedicated Trending Top 10 was launched in the kids’ section in July.  Their mobile experience introduced a short-form “fast laughs” feature.  This allows clip navigation in a TikTok style experience – definite application for younger viewers.  Perhaps the biggest change was that full episode content delivered via the Netflix kids YouTube presence significantly ramped up.  Once a true walled garden, 2021 saw the series premiere of Ridley Jones (from aforementioned Nee) hit YouTube in advance of the Netflix premiere date.

One positive about these shifts, for those of us on the outside, is the added potential for content performance data points.  Netflix themselves, in fact, recently threw the book at data reporting last November.  In a first-of-its-kind move for any streaming service, they began releasing weekly Global Hours Viewed data on top-performing series and films.

So, with all that in mind, what do we know about kids’ content performance in 2021?  Well first off, we know that animated features remain a core engagement driver for streaming.  From Sony, The Mitchell’s vs. The Machines saw good performance across US Nielsen SVOD ratings.   Chinese co-production Wish Dragon actually bested Mitchells in global Trending Top 10s. Whilst Vivo landed in time to see performance in Netflix’s new Global Hours Viewed metric.  Add to this in-house Original Back to the Outback, and you’ve got yourself a decent film slate. 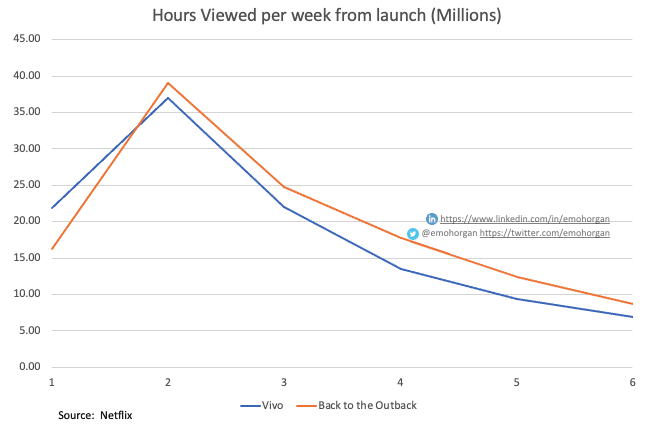 Underscoring the need to build out those in-house Originals, Netflix’s relationship with Sony went on to perfectly demonstrate the fickle nature of the content arms dealer model.  Despite 2021’s smashing run of collaborative form, Hotel Transylvania 4 will go to Amazon Prime, for the princely sum of $100m. To add insult to injury, viewership for Hotel Transylvania 3: Summer Vacation can be seen popping through in the Global Hours Viewed ranking.

In addition to animation, live-action movies remain a segment Netflix has been successfully cultivating for some time.

This genre, cast off from theatrical, has become something of a specialty for the service. There have been numerous successful film series including The Kissing Booth, To All the Boys, and The Princess Switch. Targeting strategies for these films is machine gun, rather than sniper rifle. Actively pursued potential to capture adjacent audiences, including younger/older siblings and parents, is often part of the formula. 2021 was no exception to this, with a number of notable older kid/young teen movies delivering great results for Netflix.

A key ingredient in this is often talent. TikTok star Addison Rae made her film debut on the platform with the 90s reboot He’s All That and went on to sign a 3-film deal. 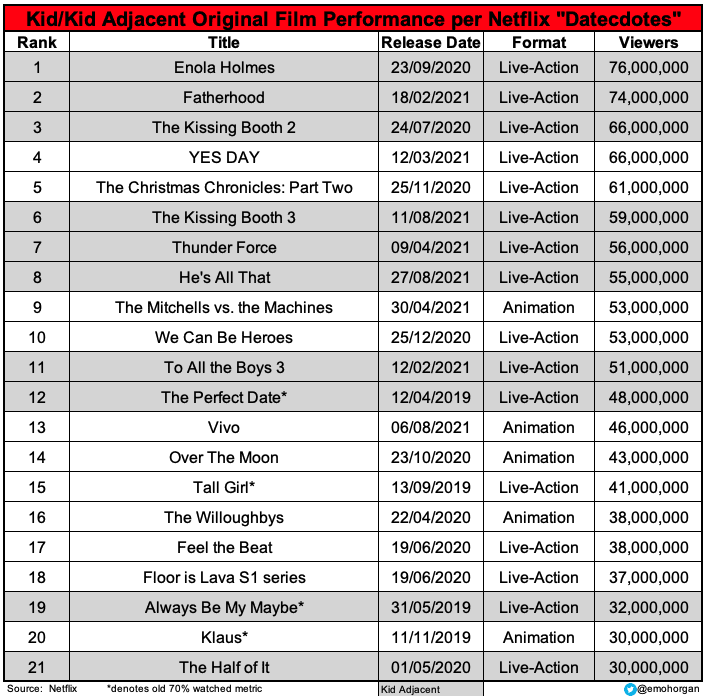 That was a lovely dataset we had once….

On kids specifically, live-action film performance was front-loaded in the year.  We Can Be Heroes (ok, which technically launched Christmas Day 2020), achieved the second-highest number of Trending Top 10 points of any movie.  It enjoyed a good re-watch factor too, as it also found itself in Nielsen’s overall 2021 US SVOD Top 15.

Finding ‘Ohana was an ultimate outsider shot that launched in January.  The swashbuckling, Indiana Jones homage lit up the Trending Top 10, and punched in weekly US Nielsen SVOD numbers.   Following this was YES DAY starring Jennifer Garner (who you know) and Jenna Ortega (who you may not).  The film saw the highest kids’ content performance Netflix have released to date.   Jenna Ortega is definitely one to watch.   Having gotten her breakthrough on Disney Channel, she has been in a number of buzz-worthy series and is now attached to the title role in Netflix’s Addams Family spin-off, Wednesday.

Where we have less evidence of kids’ content cut through is on series. With the exception of behemoth CoComelon (that cuts through on all metrics so much it’s frankly embarrassing), our data points for kids’ series are pretty limited.  DreamWorks have had some success, content drops for both Gabby’s Dollhouse and Jurassic World Camp Cretaceous pinged on public metrics. But data on Netflix in-house Originals is limited. Even in the dedicated Kids Trending Top 10s, films and specials over-index.

As you can see in the above chart, game show, Floor is Lava, is the only exception to this. Site collaborator Josh Shepherd brought this one to my attention. Very much family targeted, the show is available in the Netflix kids section, presumably to drive co-viewing. 37m viewers for season 1 was enough to push the season 2 greenlight.

Netflix’s new Global Hours Viewed should show some favourability as we look at kids’ series going forward. An “hours viewed” metric will play to content that sees a lot of repeat viewing.  Any parent will tell you that for a current favorite show this can be A LOT (see earlier:  CoComelon). Interestingly, limited series Maya and the Three cut through on Global Hours Viewed in October.  What we see here could even be a benchmark of what success looks like, with more than 55m hours in its first 2 weeks. That’s the problem when metrics change, all our previous benchmarks are rendered useless.

So where does that put us as we look forward to 2022? For animated features, both The Sea Beast and My Father’s Dragon are hotly anticipated. The former is being written and directed by Academy Award-winning filmmaker Chris Williams (Moana, Big Hero 6, Bolt). The latter comes from Irish studio Cartoon Saloon who have received Oscar nominations for all of their feature films. Looking at live-action features, sequels Tall Girl 2 and Enola Holmes 2 were both mentioned in the last earnings round.  The overall value Netflix sees in being a destination for movies was discussed at length here also.

On the series front, it will be interesting to see how the Netflix Original spin-off series CoComelon Lane lands with audiences. Moonbug Entertainment’s stablemate, Blippi, has also rolled out on Netflix in some markets. Time will tell whether CoComelon‘s success can be replicated.

Finally, looking likely to hit later than 2022 is the first Original output from the Roald Dahl deal. We assume that the two Charlie and the Chocolate Factory animated series coming from Taika Waititi will hit squarely with kids.  Maya and the Three certainly demonstrated a good blueprint of epic animated storytelling in a series format.

So what does Ted Sarandos think?

With all that in mind, it was interesting that comments from content chief Ted Sarandos regarding the kids vertical were more muted in 2021.  On the right track? Yes.  As far as animation is concerned “the greatest storytellers on the planet” are making their next project at Netflix.  But success was still judged to be a long way out for kids, a couple of years at least.  Maybe the wait is for that Roald Dahl output.  On the animated feature front, bankable in-house IP is a must-have.  Whether Back to the Outback 2 can cut this mustard is another question.

‘The Sea Beast’ Netflix Movie: Everything We Know So Far

‘The Sea Beast’ Netflix Movie: Everything We Know So Far