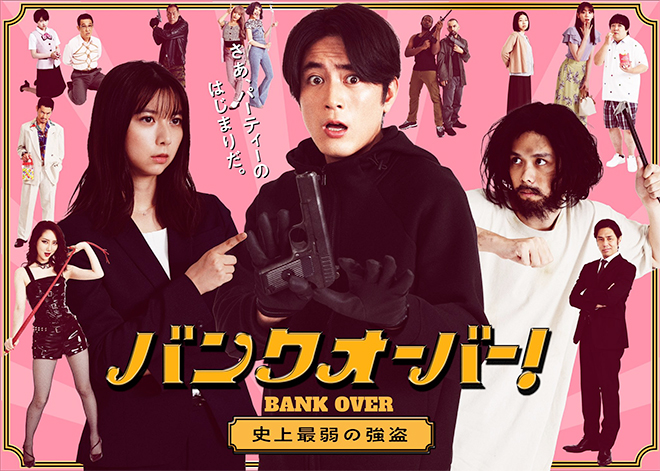 Date: From 10.30 p.m., 19 September 2021 and 11.00 p.m., 26 September 2021
Scriptwriter: Mori Hayashi (Himo Men, Nou ni Sumaho ga Umerareta!, Mane no Tenshi)
Director: Mizuno Kaku
Cast: Mamiya Shotaro, Kamishiraishi Moka, Hosoda Kanata, First Summer Uika, Ito Marika, Kijima Asuka, Hannya, Hakamada Yoshihiko
Synopsis: Saruwatari Sasuke (Mamiya Shotaro) looks tense as he stands in front of a local bank and takes out a gun. He has been driven by circumstances to rob. However, when Sasuke breaks into the bank, there is already another group of bank robbers and they look super strong. Two muscular foreign men have their guns pointed at the bank staff. He is in a tight spot due to this unexpected situation that he has run into. But there is a reason why Sasuke cannot fail in his plan. “Why don’t you discuss and decide who should bring back the money?” a lawyer called Sakura (Kamishiraishi Moka), who is one of the hostages, suggests. Going along with her suggestion, Sasuke tries to negotiate with the two bank robbers but they do not understand him at all. And they also have their own reasons for robbing the bank too. As the circumstances of the characters gradually come to light, it becomes clear that the common point between all of them is the huge gap between their looks and personality. What was supposed to be a simple bank heist gets entwined a complex web of circumstances … …
Website: www.ntv.co.jp/bankover