“Military Prosecutor Doberman” is a military court drama about two military prosecutors who chose the job for very different reasons but come together to fight evil in the military. Ahn Bo Hyun stars as Do Bae Man, an indifferent prosecutor who could not care less about his job and looks forward to taking off his uniform, and Jo Bo Ah stars as Cha Woo In, the only daughter of a chaebol family who chose the job out of revenge.

Oh Yun Soo plays Noh Hwa Young, a born soldier who was the first woman to rise to the position of division commander. Kim Woo Seok plays her son, Noh Tae Nam, who is the president of a business and inherited his mother’s innate maliciousness.

One set of new stills from the drama previews a chilling flashback scene between the mother and son. In the middle of a rainstorm at night, Noh Hwa Young and Noh Tae Nam face off in a storehouse on a military base. Noh Hwa Young carries the rank of lieutenant colonel and looks every inch the strong soldier that she does now. Noh Tae Nam, on the other hand, is a high school student dressed in uniform. Rather than the villain he has become, he looks afraid and pitiable. Even when she embraces him, he remains tense with fear, hinting at the kind of relationship this mother and son have. 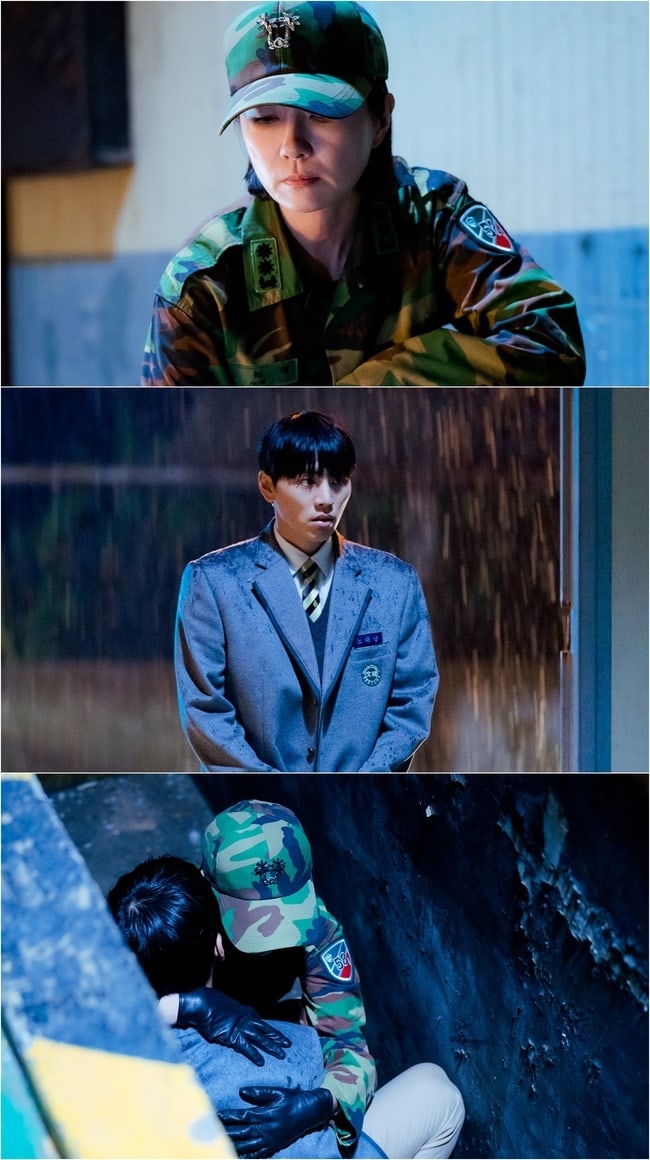 Another set of stills previews a conversation between Do Bae Man and Yong Moon Gu. Yong Moon Gu, played by Kim Young Min, is a lawyer in a prominent law firm that takes care of VIP clients’ cases. It is unusual for such a high-profile lawyer to meet with a military prosecutor, prompting curiosity about their relationship. Dressed sharply in suits, the two appear to be waging a psychological battle under their suave exteriors. Do Bae Man is pleased at taking money into his hand, demonstrating his character’s preference for being well-paid rather than the true duties of his job. On the other hand, Yong Moon Gu looks like he’s preparing to pounce on his prey as he hides his true emotions.

Watch: Jeon Mi Do And Lee Moo Saeng Experience A Flurry Of Emotions Behind The Scenes Of “Thirty-Nine”

Watch: Jeon Mi Do And Lee Moo Saeng Experience A Flurry Of Emotions Behind The Scenes Of “Thirty-Nine”