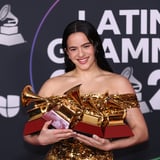 Spanish singer-songwriter Rosalía took home the Album of the Year award at this year’s Latin Grammy for “Motomami,” her third studio album. Rosalía, was moved to tears when her name was announced as the winner and gave an emotional acceptance speech about having to fight for this album. ‘”Motomami’ is the album that I’ve had to fight for the most, that’s been hardest to do, but I kept going,” she said. “Thanks for always supporting my music, because my music is always changing.”

She also hit the stage with a medley of her songs including “Despechá” and “La Fama” which she performed in an all-black latex bodysuit. The Spanish star also ended the performance and danced with her boyfriend, reggaeton star Rauw Alejandro, who cheered her on from the audience.