One of the most popular web dramas currently on air is the campus youth drama “Semantic Error”, based on a hugely popular webtoon of the same name. It is one of several other webtoon-based dramas confirmed to air this year and it is already stealing viewers’ hearts with its adorable storyline, well-written characters and most importantly, the loveable chemistry between the leads Jang JaeYoung (played by Park SeoHam) and Choo SangWoo (played by DONGKIZ’s Park JaeChan).

In recent years, queer-coded dramas like BLs and the inclusion of queer identities in mainstream media have become much more normalized in the Korean entertainment industry, especially when compared to the situation a couple of years ago. However, the stigma around alternative sexualities has still not completely disappeared. In light of this, the lead actors of “Semantic Error” opened up about their idol image and filming a BL. 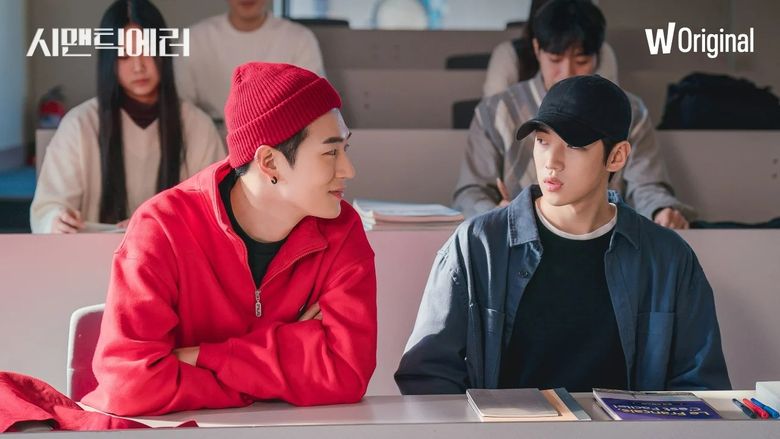 Park JaeChan shared that he was keen on appearing in “Semantic Error” despite the fact that his company stopped him, in order to maintain his image among fans. Now that it is finally airing, he is eager to see the viewers’ reactions. Rather than worrying about the romantic angle of the drama, Park SeoHam explained that he was concerned about not having enough time to analyse his character. In addition, the age difference between himself (28) and JaeChan (20) seemed to bother him too but as they worked together, they became more efficient and immersed in their characters. He further shared that according to him, the work is more of a high-teen campus drama showing young people in love than a “BL” in particular.

The two actors were also excited to reveal that the drama’s plot development will be quick and shocking, much like “Penthouse: War In Life”! If that doesn’t convince you to watch “Semantic Error”, we don’t know what will!

An Introduction To “History Of Losers”: The Latest Webtoon Getting A K-Drama Adaptation Possibly Starring Cho ByeongKyu & Song HaYoon

An Introduction To “History Of Losers”: The Latest Webtoon Getting A K-Drama Adaptation Possibly Starring Cho ByeongKyu & Song HaYoon