JTBC’s “Forecasting Love and Weather” has shared new stills ahead of tonight’s episode!

“Forecasting Love and Weather” is a romance drama about the work and love lives of people who work at the Korea Meteorological Administration, Korea’s national weather forecast service. Park Min Young stars as the frosty Jin Ha Kyung, who does everything by the book and is fastidious about keeping her personal and professional lives separate, while Song Kang stars as the free-spirited and determined Lee Si Woo, who boasts an impressive IQ of 150 but only cares about the weather.

The new stills preview a conflict in the briefing room between Lee Si Woo and Han Ki Joon (Yoon Bak). The pair had previously faced off after Han Ki Joon found out that Lee Si Woo was the ex-boyfriend of his wife Chae Yoo Jin (Girl’s Day’s Yura).

What starts as a verbal encounter soon turns physical when Han Ki Joon grabs Lee Si Woo’s shirt collar. The fiery look in Lee Si Woo’s eyes hints that he won’t back down from yet another confrontation despite the shocked reactions of Jin Ha Kyung and Chae Yoo Jin. 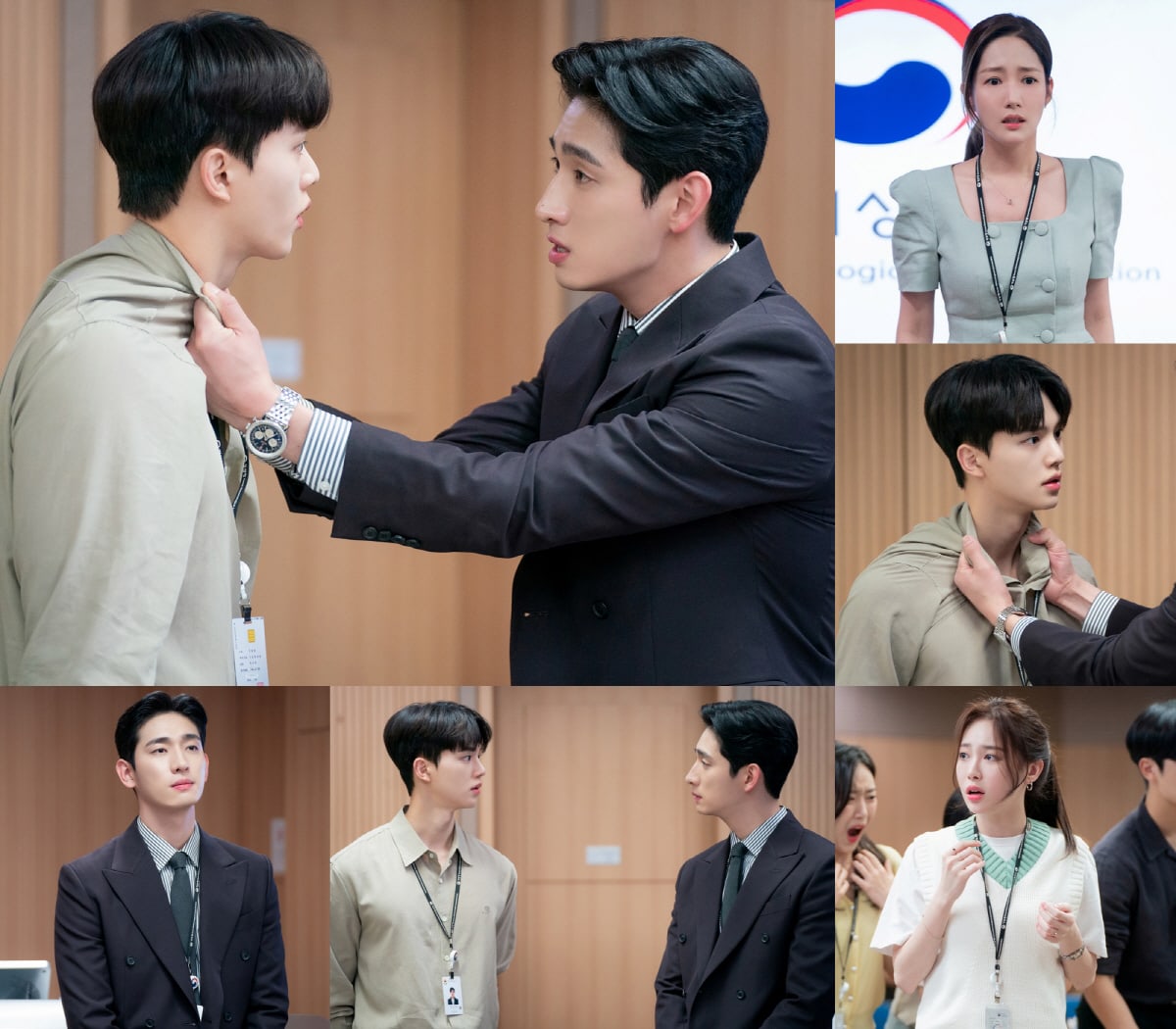 A hint to why the pair are fighting again can be found in the pre-released clip for the episode. Lee Si Woo, irritated that Han Ki Joon went to Jin Ha Kyung’s place the previous night, angrily says, “Do you still have unfinished business with Han Ki Joon?” Meanwhile, Han Ki Joon complains to Jin Ha Kyung about Chae Yoo Jin having lived with Lee Si Woo in the past. The frustrations of the two men soon escalate when Han Ki Joon exclaims, “This is all because of you!” and flings his fist at Lee Si Woo.

The drama’s producers commented, “Lee Si Woo and Han Ki Joon will grow so on-edge around each other that they eventually can’t hold back. Tune in to today’s episode to find out how the knots between Jin Ha Kyung, Lee Si Woo, Han Ki Joon, and Chae Yoo Jin unravel.”

In the meantime, watch Song Kang in “When the Devil Calls Your Name” below: