ENA’s upcoming Wednesday-Thursday drama “Unlock My Boss” has revealed a new teaser along with the main poster!

In the poster, Park In Sung, who is smiling brightly with curious eyes, and Jung Se Yeon (Seo Eun Soo), who is keeping a poker face, are standing on both sides of CEO Kim Sun Joo. The contrasting atmosphere of the two, who are each keeping watch over the boss locked inside a smartphone for their own reasons, attracts the viewers’ attention. The text that reads, “Unlock the pattern and start cooperation,” further raises anticipation for the joint operation of the three. 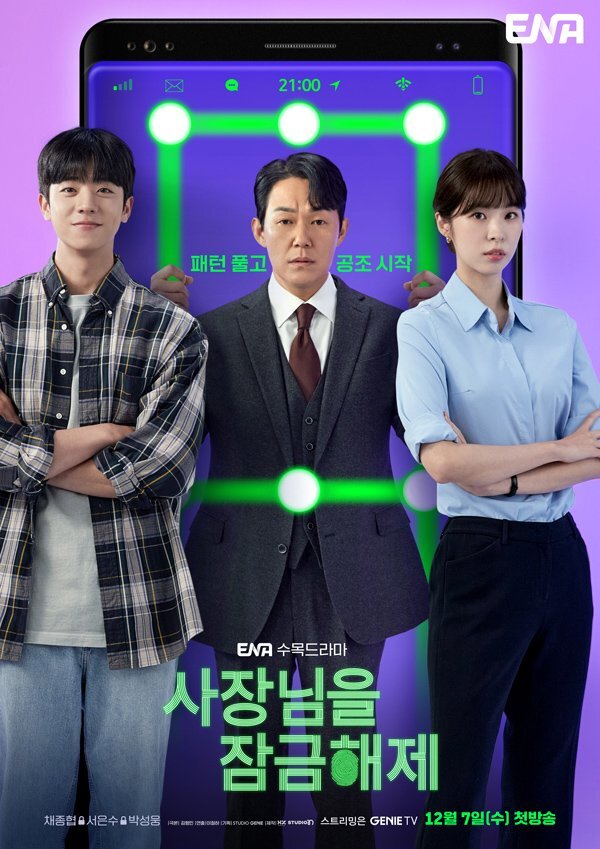 On the other hand, the teaser previews CEO Kim Sun Joo wandering alone in the dark before he gets locked in a smartphone. Soon, he disappears, and there is only a smartphone left where he was standing.

The atmosphere of the teaser changes as Park In Sung, who previously failed his job interview for the company Silver Lining, receives an acceptance letter through the mysterious smartphone as if proving that the smartphone is actually the company’s CEO Kim Sun Joo. Moreover, with the instructions of Kim Sun Joo, 29-year-old unemployed Park In Sung suddenly becomes the CEO of Silver Lining on his behalf. Viewers are curious to find out what job Park In Sung will be taking on as a temporary CEO as well as his collaboration with secretary Jung Se Yeon who is like an artificial intelligence.

Check out the full teaser below:

“Unlock My Boss” premieres on December 7 at 9 p.m. KST, and it will be available on Viki with subtitles!

While waiting, check out another teaser of the drama below:

Aslo watch Seo Eun Soo in “Missing: The Other Side”: