A new trailer and poster for the upcoming drama “Soundtrack #1” have been released!

The poster for the drama shows Han Sun Woo and Lee Eun Soo sitting together in front of a brightly illustrated cityscape. Music notes fill the air and mimic snow falling from above. Lee Eun Soo holds out her hand as if she is trying to feel the snow while Han Sun Woo looks at her lovingly. 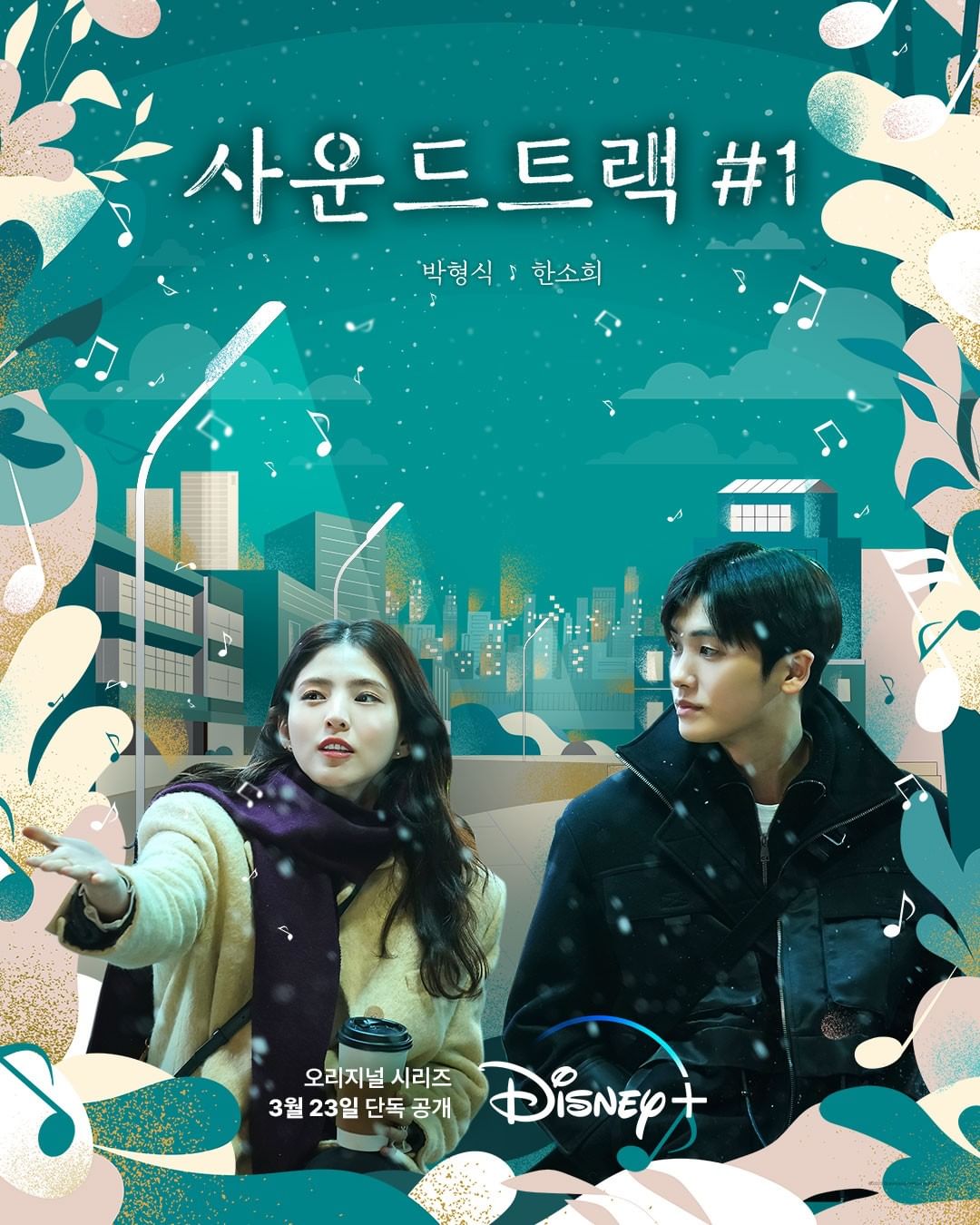 In the newly released trailer, Han Sun Woo and Lee Eun Soo’s longtime friendship begins to blossom into romance. Han Sun Woo comes out from a studio and is immediately greeted with a bouquet of purple flowers. Lee Eun Soo says, “I’m not angry anymore, how about you?” At a restaurant, Lee Eun Soo jokes with Han Sun Woo, saying, “Come to my house, and be my assistant.” Han Sun Woo smiles back at Lee Eun Soo before taking a breath and saying, “I don’t want to.”

Han Sun Woo comes to Lee Eun Soo’s house and rings the doorbell. Lee Eun Soo opens the door as Han Sun Woo questions, “Why did you open the door so late?” Once inside, Han Sun Woo remarks, “I’ll help you. You need me.” Lee Eun Soo starts to clap and says, “Welcome, assistant!” Han Sun Woo starts clapping along and excitedly stands up from the couch.

The teaser asks the question, “Are we friends or lovers?” as scenes of Han Sun Woo gazing at Lee Eun Soo and their hands inching closer towards each other appear on screen. An older woman’s voice narrates, “Sun Woo, you have someone you like, right?” before another woman introduces herself to Lee Eun Soo as Kim Seo Yeon. Kim Seo Yeon pushes Sun Woo playfully as she says, “What’s wrong with my first impression?”

Lee Eun Soo begins to question her feelings as she attends a tarot reading, and the reader flips a card and says, “A new opportunity.” She goes to dinner with her friend and says, “What’s more is that Tae Yoon said he has to work with me.” While Lee Eun Soo says this, Han Sun Woo comes across Lee Eun Soo eating dinner with another man.

The text on screen reads, “Can we love each other?” Lee Eun Soo questions her feelings for Han Sun Woo as she sits alone in the darkness next to a window. She narrates, “Sun Woo? Not him. We need to be friends for the rest of our lives if we want to live like this without breaking up until death.” Han Sun Woo’s voice intertwines with Lee Eun Soo’s and says, “If that’s what Eun Soo wants, I will really support her sincerely.” At the end of the trailer, the two characters stand side by side at a bus stop as Han Sun Woo loudly says, “Have fun. Come back, and let’s play again,” as he turns to look at Lee Eun Soo.

Watch the full trailer below!

Ahead of the premiere, the production team said, “Our project depicts the 20-year-long friendship of a man and a woman who are in between friendship and love. The chemistry between the two main characters is that much more important. Park Hyung Sik and Han So Hee completed more-than-perfect chemistry in terms of acting teamwork, thoughtfulness, and visuals. Please show interest and look forward to the two actors’ special music romance and their charms, which will brightly shine within [the drama].”

“Soundtrack #1” will premiere on March 23 via Disney+.

While waiting, check out Han So Hee in “100 Days My Prince“:

NCT’s Jaehyun Accidentally Tore A Fan’s Signed Album, But His Reaction Is Adorable

“Love And Leashes” Scene Goes Viral, And Netizens Can’t Stop Thinking Of BTS And TXT Because Of It

NCT’s Jaehyun Accidentally Tore A Fan’s Signed Album, But His Reaction Is Adorable

“Love And Leashes” Scene Goes Viral, And Netizens Can’t Stop Thinking Of BTS And TXT Because Of It